A Kinder Morgan Inc. (KMI) subsidiary has launched an open season to gauge shipper interest in expanding a pipeline system that transports natural gas from the Permian Basin to South Texas markets. 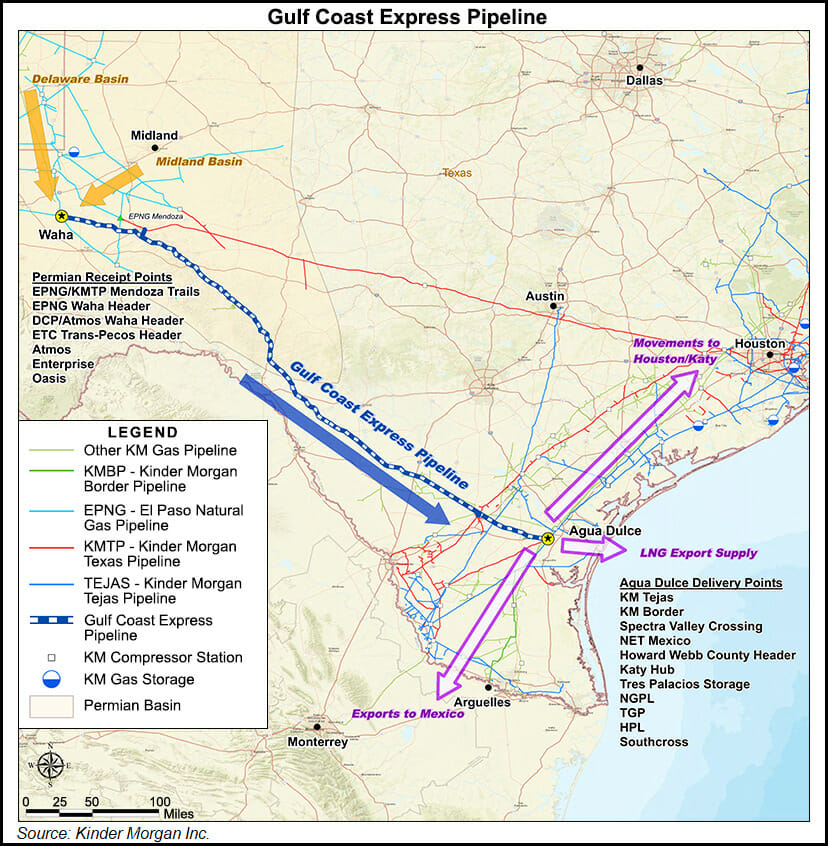 The 2.0 Bcf/d GCX moves gas supply from near the Waha Hub in West Texas to the Agua Dulce Hub in South Texas and beyond.

Management for operator KMI last month discussed the potential expansions of GCX and the Permian Highway Pipeline (PHP), indicating a need for takeaway capacity would likely materialize next year.

A binding open season for PHP concluded earlier this month, with a foundation shipper in place for half of the planned 650 MMcf/d expansion capacity. KMI is targeting an October 2023 in-service for the PHP expansion. The GCX addition is expected to be online by December 2023, pending customer commitments.

Achieving a 2023 in-service date “will really help alleviate a containment issue that we’re starting to see now and certainly expect to get much worse as we get into 2023,” KMI’s Tom Martin, president of natural gas pipelines, said last month.

Altus Midstream Co. also is an owner in GCX, while Targa Resources Corp. sold its 25% stake earlier this year to an undisclosed buyer.

The potential expansions come as the Energy Information Administration (EIA) is calling for Permian production to continue growing. In the latest Drilling Productivity Report issued Monday, the EIA said Permian output is set to grow by 169 MMcf/d from May to June, reaching 20 Bcf/d.

Meanwhile, the most recent Baker Hughes Co. rig data showed the number of rigs operating in the Permian held steady for the week ending Friday (May 13). There were 335 total rigs in the basin, which is up 45% from last year.