Kinder Morgan Inc. is looking to make a bigger splash in the energy transition space with the $310 million acquisition of Kinetrex Energy, a renewable natural gas (RNG) and small-scale liquefied natural gas (LNG) player. Indianapolis-based Kinetrex claims to be the largest supplier of LNG in the Midwest with two LNG production facilities in Indianapolis. Each has 1 Bcf of cryogenic storage capacity. It also has four truck-loading stations. 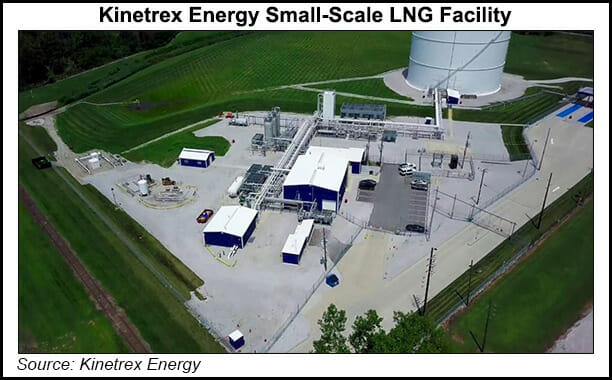 On the RNG side, Kinetrex holds a 50% interest in a landfill RNG facility in Indiana. The assets to be acquired also include three more landfill RNG sites, along with signed commercial agreements. The facilities are expected to come online over the next 18 months.

“We have been focused on RNG due to its potential to grow rapidly in the near term and deliver attractive returns, with landfills providing a low cost, predictable and long-term feedstock,” said Jesse Arenivas, president of Kinder Morgan’s Energy Transition Ventures (ETV) group. “The team at Kinetrex has developed an outstanding business model and platform for future growth in a fragmented market.”

The ETV group was formed earlier this year and has been tasked with scouting low-carbon investments for the Houston-based midstream giant.

Small-scale LNG producers are under pressure from customers to use feedstock from lower-carbon sources such as RNG as they seek to lower their own emissions profiles. Another small-scale LNG player, Sapphire Gas Solutions, has begun offering RNG transport and system injection services in California.

Under the terms of the deal, Kinetrex CEO Aaron Johnson would join the Kinder Morgan team following the transaction’s close. As president of RNG, he would report to Arenivas. Other unnamed “key members” of Kinetrex’s management team are also expected to join Kinder Morgan.

Additional details on the deal, set to close in the third quarter, were not disclosed.

Kinetrex was formed in 2013 and is backed by Wake Forest, IL, private equity firm Parallel49 Equity. The firm invests in middle-market companies in the specialty manufacturing and business services sectors.