Kinder Morgan Inc. (KMI) continued to improve its balance sheet in the final three months of 2020, but the company is toeing the line when it comes to spending this year, focusing on projects supporting the rampant growth in exports. 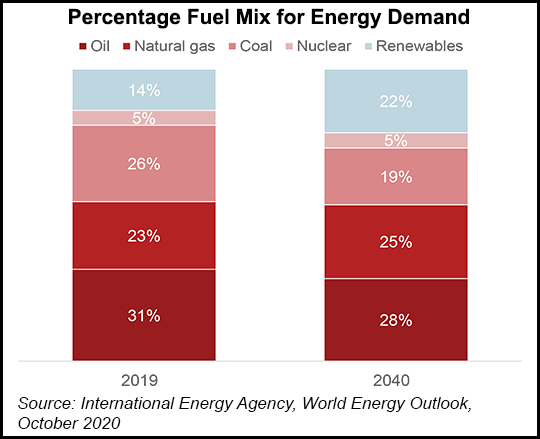 Speaking during a conference call Wednesday, CEO Steven Kean said 2020 “has shown us how important it is to have our priorities and principles straight.” Natural gas, KMI’s core business, saw lower transportation volumes because of lower commodity prices and Covid-19. However, the midstreamer brought online the long-awaited, and often contentious, Permian Highway Pipeline, only three months later than its original target.

With an eye on growing exports to Mexico and in the form of liquefied natural gas (LNG), the midstream giant expects to spend less than half of what it spent in 2020 on expansions and joint ventures this year, only $800 million, after setting a budget of $1.72 billion last year. The company reduced spending by $680 million amid the pandemic and the oil price downturn.

The expansion of the Kinder Morgan Louisiana Pipeline, which began construction in 4Q2020, is expected to be a focus for the year. The Acadiana expansion project would provide 945,000 Dth/d of natural gas capacity to serve the sixth LNG production unit at Cheniere Energy Inc.’s Sabine Pass LNG terminal. The pipeline could be in service as soon as early 2022.

In December, the company placed into service portions of Natural Gas Pipeline of America’s (NGPL) Gulf Coast Southbound project ahead of schedule. The entire project is expected to be placed into service by the end of March, increasing southbound capacity by around 300,000 Dth/d to serve Cheniere’s Corpus Christi Liquefaction export facility in South Texas.

Although financial contributions from all of the business segments were down compared with 4Q2019, KMI President Kim Dang said lower interest expenses and lower sustaining capital expenditures (capex) year/year cushioned the blow.

Natural gas transport volumes were down 2% year/year, or 600,000 Dth/d, with large volume declines on pipeline systems out of the Rockies because of lower production. El Paso Natural Gas (EPNG) throughput also declined because of increases in transportation alternatives for Permian Basin production, namely PHP. The 2.1 Bcf/d system entered full commercial operations this month.

Tom Martin, president of the Natural Gas Pipelines Group, also attributed the lower EPNG volumes to weaker demand in California. The executive said much of the lower demand was seasonal and assuming demand returns in 2021, “we think that likely recovers a bit.”

Martin added, “I think how we serve California is changing.” With the growth in renewable energy, some long-term volumes may not be as strong, especially to Northern California, he said. However, the amount of capacity needed into the market “probably grows over time as more renewable penetration increases in that area.”

Meanwhile, increased LNG exports and stronger industrial demand helped to offset the lower transport volumes across the pipeline systems. Dang said physical deliveries to LNG facilities off of the company’s pipes averaged almost 5 million Dth/d in the final three months of the year. “That’s a 50% increase versus the fourth quarter of 2019.” For 2020, the pipelines moved more than 40% of the volumes moving to U.S. LNG terminals.

Mexico deliveries, meanwhile, ran at more than 55% for the year, while deliveries to power plants were down 2%. Natural gas gathering volumes were off about 20% in the quarter compared to 4Q2019.

Lower volumes were seen in the Haynesville Shale during the quarter because of a lack of drilling and declines in existing well production, according to Dang. However, “we’re still expecting, based on our conversations with producers, to see new drilling in that basin this year.”

Eagle Ford Shale volumes also were lower, but the Bakken Shale emerged as a “bright spot.” The Hiland crude oil and natural gas system in North Dakota and Montana saw volumes grow “well over 20%” versus 3Q2020. Kean said the lion’s share of the increase was attributed to one of the company’s large producer customers returning production following “significant” shut-ins in 2Q2020.

Management also struck an upbeat tone for the Permian. “If you look at the Permian, the rig count there, that’s where most of the rigs have been added,” Dang said. Producers are getting close to a rig level in the Permian that can see production flat to where the market was “pre-pandemic. That won’t happen immediately. That will take time to get there.”

With respect to plans by exploration and production (E&P) customers and their spending guidance for 2021, Dang said the outlook for oil prices pointed to potential growth. She thinks E&Ps need to feel “that these prices, especially on the crude side, are going to stay strong for a long period of time.” The executive noted that the reductions in oil production by the Organization of the Petroleum Exporting Countries and its allies, led by Saudi Arabia, “are holding a lot of barrels of the market, and so know that creates price uncertainty.”

E&Ps also are focused on free cash flow, Dang said. “It’s not clear how much they would ramp up capex in response to increasing prices.”

Kean said annual carbon dioxide equivalent emissions have decreased significantly in the past few years even as the U.S. economy has grown. He touted the role natural gas has played in power generation during that time.

Because of the lack of energy density, Kean said “an awful lot” of manufacturing, mining and disposal costs are associated with building” out renewables infrastructure. Once the public discourse around ESG expands to include those measurements on renewables, “it brings natural gas much closer in terms of environmental impact.”

KMI works with renewable companies and utilities that are increasing their renewable portfolios, and its business “plays an important enabling role there,” according to the CEO. “But there is a lot more to, I would say the natural gas story, once you take everything into account.”

The 2021 budget contemplates $2.1 billion (92 cents/share) in net income for 2021 and distributable cash flow (DCF) of around $4.4 billion ($1.95/share). KMI expects to generate $1.2 billion of DCF in excess of discretionary expenditures and dividend payments.

The board expects to increase the dividend by 3% for 2021 to $1.08/share annualized and has set aside $450 million for “opportunistic” share repurchases.