Kinder Morgan Inc. is bringing production units back online at its Elba Island liquefied natural gas (LNG) export facility in Georgia after a fire at the facility on May 11. 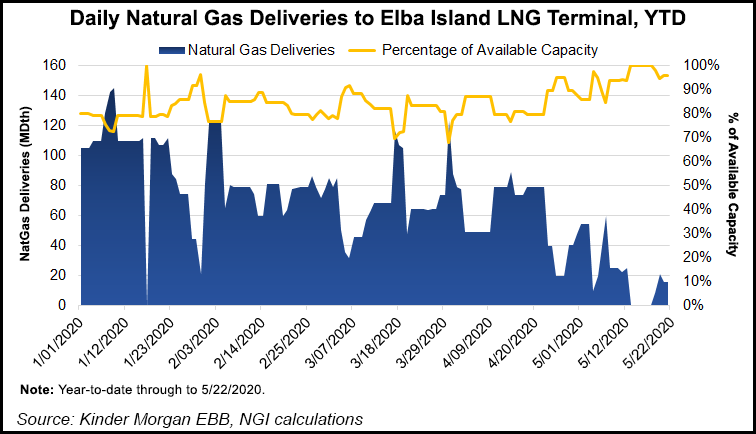 The fire erupted in a mixed refrigerant compressor of the facility’s Unit 2 movable modular liquefaction system, one of six in operation. It forced the company to shut down nearby Units 1 and 3 as a precaution.

Spokesperson Katherine Hill said Unit 3 began the restart process late Tuesday. Unit 1 had also commenced the restart process by Friday. Feed gas deliveries to the terminal were at about 15.8 MMcf on Friday, compared to just 84 Mcf on the same day a week earlier, according to NGI’s U.S. LNG Export Tracker.

An investigation into the cause of the fire is ongoing, Hill said. She added that there is no estimated date for when Unit 2 may be brought back online. Unit 8 is also still undergoing commissioning.

The outages at Elba come as feed gas deliveries to U.S. export facilities have fallen significantly and remained below 6 Bcf since last week. That’s down from highs of 9 Bcf/d earlier in the year as global gas prices plummet and pressure the economics of shipping U.S. LNG overseas. More than 30 U.S. cargoes have been canceled for June delivery, according to ship broker Poten & Partners, while nearly as many are expected in each month through October.

Units at Elba have an individual liquefaction capacity of 0.3 million metric tons/year (mmty), compared to standard liquefaction trains at other export facilities that typically have a 4 mmty capacity. The terminal has the ability to fill about three LNG carriers per month.

The first cargo was sent from Elba last year. Royal Dutch Shell plc holds 100% of Elba’s liquefaction capacity under its tolling agreement with the terminal. Given its smaller capacity, the outage hasn’t had a big impact on the broader market, said NGI’s Patrick Rau, director of strategy and research.