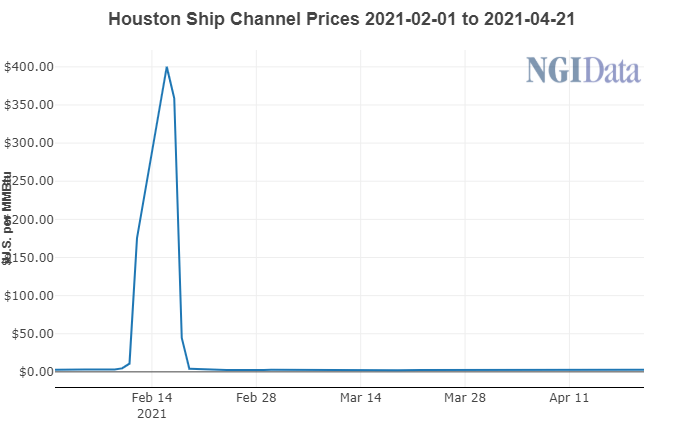 CEO Steven Kean said KMI took several actions prior to and during February’s historic freeze to ensure the midstream giant’s systems, particularly in hard hit Texas and the central United States, could remain operational during the cold snap. Previous investments in assets, particularly gas storage assets, also “were a huge help,” he said.

“We were on maximum withdrawal for days at several of our fields,” Kean told investors Wednesday during the quarterly earnings call.

KMI deployed staff in advance of the storm to keep facilities running and to make any needed repairs quickly. It also delivered additional generators to facilities, and staff were on site at some locations that normally are automated.

“Our team went to key compressor stations, storage facilities and delivery points to keep gas flowing, including a key delivery point to the city of Austin,” the CEO added. “Our investments, and especially our team, winterized us against a terrible storm.”

KMI also purchased additional gas, “some at very high prevailing prices,” to serve power plants and utilities, according to Kean. “We performed well operationally and commercially across our entire gas network, but our financial performance was especially strong in our Texas interstate pipeline and storage network.”

Kean pointed out that a key difference between its Texas intrastate system and interstate gas pipeline systems is that KMI has a purchase and sale business in the state, supported by high deliverability storage assets. In contrast, interstate pipelines nearly exclusively sell unbundled transportation and storage services. Although KMI sells unbundled transportation and storage services in Texas as well, its purchase and sale business is generally done with reference to an index price.

When prices are in a “normal range,” it’s a “very stable” business, with roughly 80% of Texas intrastate pipelines under take-or-pay contracts. In February, however, supply and demand conditions caused prices to increase by more than 100 times and then plunge by the same order of magnitude over the course of a week, Kean noted.

The unprecedented event also brought to light the value of preparation. “Many of our additional sales — whether as a result of higher takes under our existing contracts or incremental sales that we were able to do during that week — took place at prevailing market prices, which during that week at the Houston Ship Channel ranged from $180/MMBtu to $400, versus $3 earlier in the same month.”

Meanwhile, KMI’s carbon dioxide (CO2) business also reaped benefits from the contract it has in place with its power provider, which enables KMI to shed load and be compensated at the prevailing power price.

Kean said the contract “worked as designed, and particularly with prices as high as $9,000/MWh, we earned a substantial financial benefit while letting those megawatts be made available to serve human needs.”

The oil production curtailed was restored quickly following the event, with greater flexibility built into the business, according to the CEO. However, “we have lessons to learn too, and we’ll use those lessons to get even better at severe weather performance for us and for our customers.”

Although the financial performance stemming from Uri was viewed by management as a one-time event, Kean said there is “substantial interest in our services following the storm.”

The midstreamer is pursuing more long-term firm capacity sales and associated capital investments to help customers “be even better positioned for future extreme weather and create incremental value for Kinder Morgan,” according to Kean. Any new contracts would support the base business and in new origination, “the results could be long-term additional and more consistent earnings and investment without the extraordinary and rare game that we experienced in the first quarter.”

Noting that an “appropriate amount” of contracting firm deliverability should be in every portfolio, Kean said he thought any “changes made in the market structure would adequately compensate and incent parties to do so.”

Management is keeping a watchful eye on any legislation related to transportation purchases or other services. There is a “continued and determined focus” on examining winterization and how the energy industry can do better to make sure the events during Uri don’t happen again, Kean said.

“I do think that a lot of that is likely to be resolved not by legislation, but by direction given to specialized regulatory bodies and others to develop in more detail. And we’ll want to be participants in that,” the CEO said. “We’re going to want to show the benefit of what we can do, and we’re also going to want to be constructive in relating how the gas and power industry can better communicate in this state going forward.”

With the unexpected bump in earnings, KMI plans to reduce net debt but also maintain capital discipline through self-funding investments. While there may be some “incremental investment opportunities,” those are not expected to be significant in 2021, Kean said.

Kean also discussed the New Energy Transition Ventures business group launched during the first quarter. The group is to focus on “analyzing and quantifying opportunities for additional assets and service offerings tailored to the ongoing energy transition.”

The team has already identified and is working on a number of specific opportunities, Kean said, though he did not provide details. KMI’s business units also continue to focus on energy transition opportunities that align with their operations. These include using midstream services for renewable diesel and using the gas transportation and storage services to support renewable power.

The company also is marketing its low methane emissions performance as responsibly produced and transported natural gas. It inked a deal with Colorado Springs Utilities in March and has another in the works.

Capital expenditures this year are estimated about $75 million higher than the planned $800 million. The increase is largely because KMI opted to replace some interstate pipe in rural South Texas, rather than continue to spend money running inspection tools and repairing the pipe.

KMI raised the dividend by 3% for 2021 to $1.08/share. The approach to share repurchases, however, remains the same, according to the CEO. “We’ll be selective, not programmatic. We’ll base our decisions on the returns versus the alternative uses for the cash that we generate, including projects or assets.”