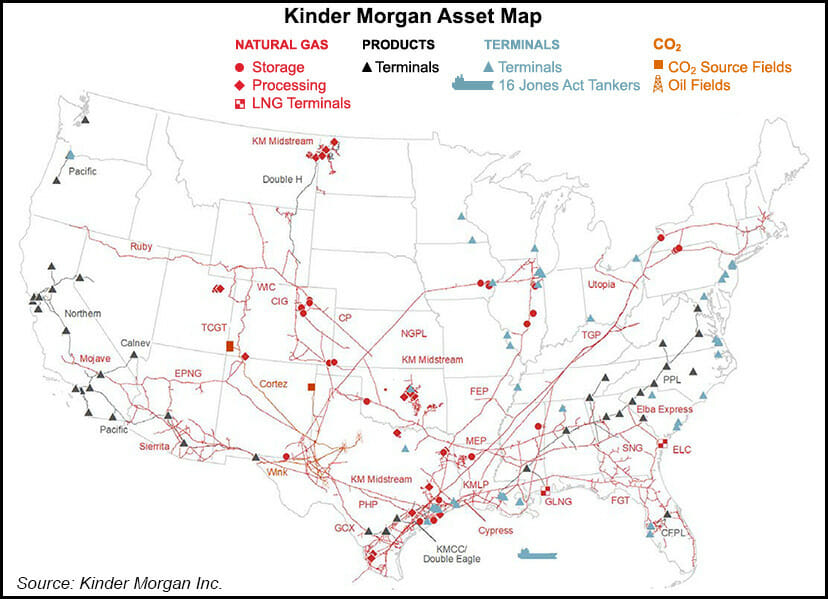 While results were solid, the executive chairman said it had “become apparent, particularly over the last several months,” that the transition away from fossil fuels “will be longer and more complicated than many originally expected.”

The company plans to be a big player in the energy transition game, backed by its broad gas pipeline network and by reducing emissions from its supplies.

“We remain committed to allocating capital conservatively in both our traditional businesses and new opportunities in the low-carbon energy transition,” Kean said. “With multiple new deals and arrangements for transporting responsibly sourced or certified natural gas, we are leveraging our status as a low methane emission intensity leader within our sector.

“Our assets remain well positioned to serve growing domestic markets and export locations for LNG and Mexico. Over the next 25 years, we plan to build on continued strong performance in our base businesses while exploring exciting new opportunities in the growing low-carbon sector.”

Working On RSG And RNG

Pending approval from the Federal Energy Regulatory Commission, the pooling service could be available before the end of June.

“There is a long runway for fossil fuels, and especially natural gas,” Kinder told analysts on the call. “Investing in the energy sector has been very lucrative recently.”

Look for the company to “favor generally smaller-sized projects that are built off of our existing network,” Kean said. “We can do those at very attractive returns, and with less execution risk.”

One such avenue is via small-scale renewable natural gas (RNG), after the company invested $310 million last year in Kinetrex Energy.

Construction continues on Kinetrex’s three landfill-based RNG facilities in Indiana. The first facility is set to be in service by September, with the third ready next January. Kinder could begin monetizing renewable identification numbers, or RINs, from the new plants early next year. Total RNG production from all three sites is estimated at more than 4 Bcf.

Gas transport volumes fell 3% year/year in the fourth quarter, or around 1.1 million Dth/d because of declines on Colorado Interstate Gas Pipeline “due to continued declining production in the Rockies basins.” Also cited for the decline was a pipeline outage on EPNG and contract expirations for FEP.

The declines were partially offset by increased volumes from the PHP going into service in early 2021, as well as gains for the Tennessee system and higher LNG deliveries via the Kinder Morgan Louisiana Pipeline (KMLP), Dang said. The Acadiana expansion project for KMLP went into service in October, ahead of schedule. The project prices 945,000 Dth/d of capacity. It serves Cheniere Energy Inc.’s sixth train at the Sabine Pass LNG facility in Cameron Parish, LA.

Gas gathering volumes rose 6% from 4Q2020, “with higher volumes across multiple systems, most notably on our Eagle Ford assets.” Meanwhile, gas exports to Mexico declined year/year “as a result of third-party pipeline capacity recently added to the market,” Dang noted.