Kinder Morgan Inc. (KMI) executives have confirmed the rumors that have circulated in the oil and natural gas industry for months, indicating that a full ramp-up of its highly anticipated Gulf Coast Express natural gas pipeline is expected a week to 10 days earlier than its planned Oct. 1 start date. 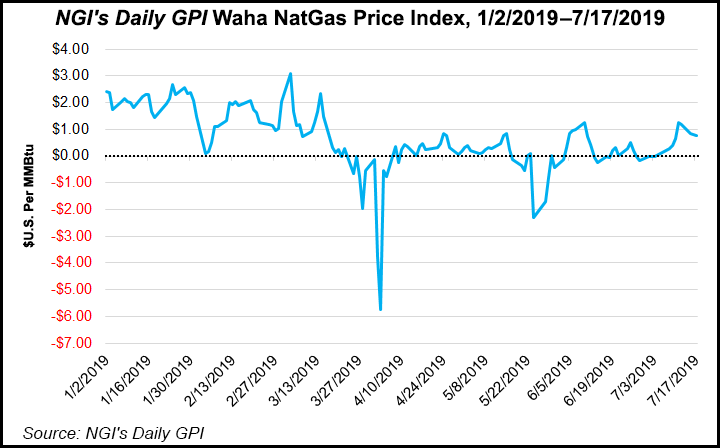 The 2 Bcf/d pipeline is expected to provide a much-needed relief valve for Permian Basin associated gas, which has become increasingly stranded because of a lack of takeaway capacity and, at times, has led to negative pricing in the region.

“The pipe is in the ground, there is still commissioning work going on the compressor and meter stations, but our expectation is for a slightly early in-service date,” KMI CEO Steven Kean said Wednesday on a call to discuss second quarter earnings.

The $1.75 billion Gulf Coast Express runs from the Permian to Agua Dulce, TX and is fully subscribed under long-term shipper agreements.

KMI’s Permian Highway Pipeline (PHP) project, also fully subscribed and sanctioned in September, is progressing on schedule despite a court challenge by Texas landowners that threatened to derail the work. The Travis County District Court’s decision last month, which is pending appeal, crushed a challenge by landowners to the licensing process,* which allows pipeline operators to determine the route and acquire land without a landowner’s consent.

Discussions with landowners are continuing “at a decent pace”, with the 2 Bcf/d project still on target to enter service in October 2020 and on budget, Kean said. “A piece of this pipeline is going through the Hill Country, which we knew was going to be a challenge and so we allowed for extra time in the acquisition of the right of way.”

PHP would move gas through a 430-mile pipeline from Waha to Katy, west of Houston, with connections to the Gulf Coast and Mexico markets. Shippers already committed include EagleClaw Midstream Ventures LLC, Apache Corp. and ExxonMobil Corp.’s XTO Energy Inc.

“Those projects bring opportunities for downstream expansion and optimization as we find homes for all that incremental gas through our connectivity with liquefied natural gas (LNG) facilities, Texas Gulf Coast power, industrial and petchem demand,” Kean said.

Driven by strong producer interest, KMI is also mulling what would be its third 2 Bcf/d pipeline out of the Permian — to be called Permian Pass. Like previous projects, KMI management indicated that it would likely take partners in the project and expects to see interest from very large shippers, though the project is in the very early stages of development and not currently included in the company’s $5.7 billion backlog.

“There is large supply growth in Texas and large demand growth in Texas. We can bridge the two and connect to our premier Texas intrastate pipeline network and stay entirely within the state of Texas where we have more commercial flexibility,” Kean said.

When asked about whether there is enough gas demand to support a fourth pipeline out of the Permian — backers of the Whistler pipeline decided last month to move forward with the 2 Bcf/d project — the company chief said that some projections reflect a need for a fifth line.

“People are looking for opportunities to get that growing associated gas supply out of the Permian, so that they can produce their oil and natural gas liquids too. The proof will be in the sign-ups,” Kean said.

Natural gas transport volumes on KMI systems were up 10% compared to 2Q2018, with the largest gains on El Paso Natural Gas (EPNG) and Kinder Morgan Louisiana Pipeline (KMLP), followed by Colorado Interstate Gas Pipeline Company (CIG), Wyoming Interstate Company (WIC) and Ruby Pipeline. This constitutes the sixth quarter in a row in which volumes exceeded the previous comparable prior year period by 10% or more, according to management.

EPNG benefited from Permian-related activity and colder weather in California, while KMLP’s increase was because of the late 2018 in-service of the Sabine Pass Expansion, which was developed to provide gas to the fifth train at Cheniere Energy Inc.’s Sabine Pass LNG terminal. CIG improved due to increased production in the Denver-Julesburg (DJ) basin and colder weather, and WIC saw higher flows from the DJ and Powder River basins. Ruby volumes were up due to colder West Coast weather and Pacific Northwest pipeline outages.

The midstream giant is also “closing in” on the commercial start-up of its Elba Island Liquefaction Project near Savannah, GA. The first of 10 production units is mechanically complete and expected online soon, according to management.

The first train at Elba Island was due to come online in May, but mechanical issues arose with having the LNG in the cold box at too low a temperature, which caused the LNG to solidify, according to Kean. “Unevenness in the temperatures between the bottom and the top of the cold box had been plaguing our start-up over the last several weeks. We are now past that and ramping up to full service.”

The company chief was unable to provide a more definitive start-up date, but said it is a function of whether the company has to suspend LNG production for additional troubleshooting.

“The lessons we learned with the first unit are being applied to the others,” Kean said. All units are expected to go through the commissioning process throughout the remainder of 2019, with one possibly drifting into 2020.

KMI on Tuesday received federal approval to move forward with another LNG export terminal, the proposed Gulf LNG project in Mississippi. The project calls for expanding KMI facilities in Jackson County, which would include two liquefaction trains, each with a capacity of 5 million metric tons/year (mmty) and maximum capacity of more than 5.4 mmty. It also proposes modifying the existing Gulf LNG Pipeline to provide bidirectional flow.

When asked about customer discussions and a timeline for a possible final investment decision, Kean said that while the Federal Energy Regulatory Commission approval “was a nice step”, the project is “quite a ways off. There is nothing imminent there.”

Meanwhile, KMI in June filed with federal regulators an application for its $145 million Acadiana Project, which would provide 945 MMcf/d to serve the sixth train at Cheniere’s Sabine Pass LNG facility. If approved, the project is expected to start commercial operations in February 2022.

KMI plans to spend about $500 million to expand its existing natural gas gathering and processing footprint in the Williston Basin. Construction is underway on a new 150 MMcf/d cryogenic plant in McKenzie County, ND, that is expected to be online by Nov. 1. About 275 MMcf/d of gathering capacity is also being created through pipeline and compression additions in the area, management said.

In the Northeast, KMI’s Tennessee Gas Pipeline (TGP) has entered into a long-term, binding agreement with Consolidated Edison Inc. to provide 110 MMcf/d of capacity to the utility’s distribution system in Westchester County, NY. The roughly $246 million expansion project, scheduled to go online in November 2023, involves upgrading compression facilities upstream on TGP’s system, with most of the costs to be incurred after TGP receives all required regulatory approvals. The expansion would help ease supply shortages in the state, where the regulatory climate has made it difficult to build greenfield projects.

“These are very valuable projects that are very much in the public interest,” Kean said, noting KMI’s “very careful and thoughtful approach in putting them together because of the permitting risk in the Northeast.”

Kinder Morgan Canada Ltd. (KML) reported second quarter earnings of $21.6 million, a decrease of $1.9 million from a year ago, due to the recognition of a non-recurring gain on an asset sale during 2Q2018. DCF was $28.3 million, down 22% year/year as a result of a $9 million increase in cash tax payments due to the change from a net operating loss to a taxable position as a result of the Trans Mountain sale.

The KML board has authorized a stock buyback program that will allow it to repurchase up to 2 million KML-restricted voting shares during the 12-month period beginning July 22 and ending July 21, 2020.

*Correction: In the original article, NGI incorrectly stated that the Railroad Commission of Texas allows pipeline operators to determine the route and acquire land without a landowner’s consent. The state law is enacted by the Texas Legislature. Additionally, the Railroad Commission has no authority over the routing or siting of intrastate or interstate pipelines. The pipeline route is determined by the pipeline’s owner/operator. NGI regrets the error.