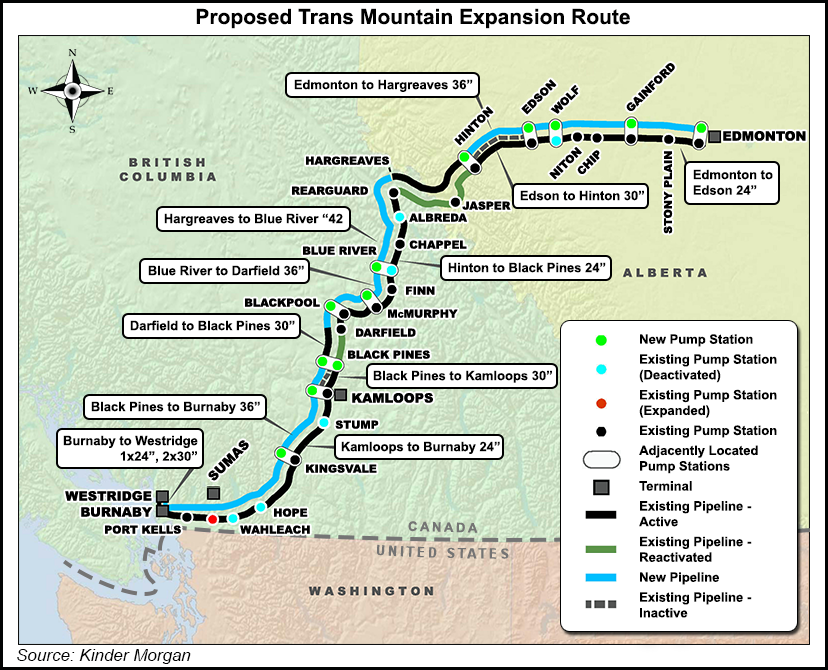 After sailing through squalls of eco-protest in the Vancouver suburb of Burnaby, Kinder Morgan Canada has made the construction application for the last four-kilometer (2.5-mile) leg of new facilities to triple capacity on the Trans Mountain Pipeline.

If approved as proposed to the National Energy Board (NEB), the additions will ship out a river of Alberta and BC oil production, enabling Canadian exporters to break their habit of relying on pipelines to the United States by sending tankers around the globe.

The design will enable simultaneous, continuous operation of three oil docks in Vancouver harbor, where Trans Mountain has shipped out occasional cargos from a marine terminal named Westridge since 1954.

The new facilities will be capable of filling ships at the brisk rate of an Aframax within 24 hours, says Kinder Morgan Canada’s application. Aframax-class tankers are the tramp steamers of the global trade, big enough to stay economic in all market conditions but nimble enough for use in all seas and ports.

An Aframax — named after “average freight rate assessment,” a tanker standardization system adopted in the 1950s — carries about 750,000 bbl, or four-fifths of the 890,000 b/d flow planned for the enlarged Trans Mountain line.

The facilities include a pair of jumbo loading pipelines, each one 30 inches in diameter and capable of 700,000 b/d, to be laid in a tunnel far from public view below an uninhabited mountainside conservation area next door to Burnaby.

The route to the docks was devised after safety and environmental consultations with residents of the Vancouver satellite city. Few of them attended noisy rallies against route survey work this fall.

As a local battle over fossil fuels, carbon emissions, oil companies and tanker shipping, the protests garnered attention across Canada. But a court order that banned physical interference, and police arrests of protesters, opened enough room and time to complete the job, Kinder Morgan told the NEB.

Protesters in Canada and the United States focus on expectations that the northern oilsands could fill the C$5.4 billion (US$4.9 billion) in additions to the line across 1,150 kilometers (690 miles) of foothills and mountains between Vancouver and the Alberta capital of Edmonton.

But over its 61-year history, Trans Mountain evolved into the only North American pipeline that carries a full spectrum of petroleum liquids — from heavy bitumen to light refined products such as gasoline — by using a separation method known as batching.

The Trans Mountain expansion is fully booked by shippers and shows no signs of faltering — unlike the stalled lineup of 18 LNG terminal projects on BC’s Pacific Coast, where BG Group and Malaysian state energy conglomerate Petronas have called indefinite timeouts and others are idling silently in slow regulatory proceedings.

Horizontal drilling and hydraulic fracturing open abundant lower cost targets for development in smaller stages than the oil sands, where 10,000 b/d production sites are pilot or test plants on the industry yardstick of required economies of scale.

On the fracking front, a vast 14.9 billion bbl of natural gas liquids (NGL) and 1.1 billion bbl of oil await production in just the best known, most accessible western Canadian shale deposit, according to a joint federal-provincial assessment of recoverable reserves in the Montney geological formation that straddles 130,000 square kilometers (50,000 square miles) of northern BC and Alberta.

An appraisal group in the Alberta Energy Regulator has calculated that volumes embedded in only the province’s five shale deposits with “immediate potential” for development are 58.6 billion bbl of NGLs and 423.6 billion bbl of oil.

NEB orders for special route engineering studies and delaying actions by protesters have added seven months to the project schedule. But Kinder Morgan is still aiming for efficient approval, by mid-2016, to expand Trans Mountain Pipeline for BC and Alberta production growth.