Houston-based Kinder Morgan Inc. (KMI) is expanding its footprint in the Northeast with the $1.225 billion purchase of the Stagecoach natural gas pipeline and storage system from a joint venture between Crestwood Equity Partners LP and Consolidated Edison Inc. (ConEd). 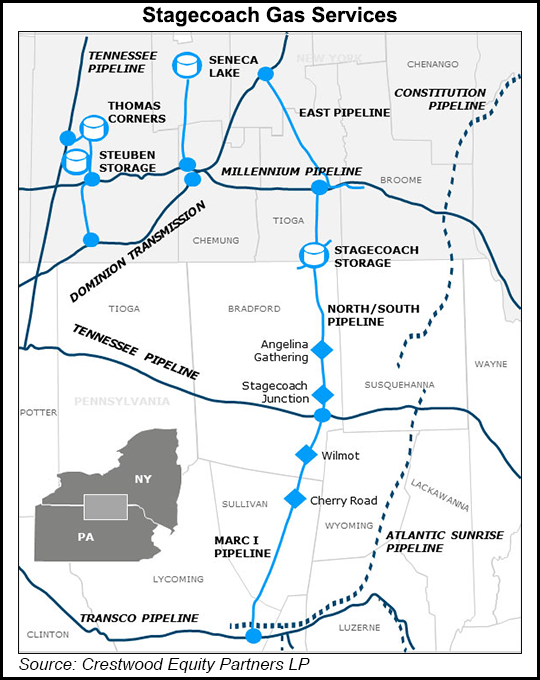 The Stagecoach purchase would deepen midstream giant KMI’s net natural gas storage position by around 8%. Management for the midstreamer touted its investments in storage assets for helping it meet the unprecedented demand stemming from Winter Storm Uri in February. Several of KMI’s Texas storage facilities were “on maximum withdrawal for days,” CEO Steven Kean said on the first quarter 2021 earnings call.

Watson added that natural gas has long been responsible for providing heat and hot water to homes and businesses in the Northeast. It now has an “increasingly vital role as a reliable, low emissions partner backing up growing renewable power generation.”

For its part, Northeast utility ConEd has expanded its efforts to reduce the use of fossil fuels for heating and has set its sights on “leading the transition to the clean energy future,” according to CEO Timothy Cawley. “This transaction is consistent with our strategy to deliver on that future.”

Stagecoach’s potential sale has been a topic of discussion on several of Crestwood’s quarterly earnings calls over the past year.

In April, Crestwood management said the pipeline and storage system continued to see “record demand” as a result of increased production in the Marcellus Shale, with storage and transportation assets nearly 100% contracted. The assets were “performing well ahead of plan for the year,” which was expected to continue through the remainder of the year.

At the time, CEO Robert Phillips said the company was involved with several potential “quality” buyers for the Stagecoach assets, “which to us speaks to the real value of the asset at this point in time.”

However, it booked a $140 million goodwill impairment on its equity investment in Stagecoach during the quarter.

Analysts noted that KMI was able to purchase the Stagecoach assets with the $1.0 billion windfall it received from Uri.

Tudor, Pickering, Holt & Co. pointed out, however, that KMI stock’s modest underperformance following the announcement screens “reasonably,” as the acquisition comes at the expense of more rapid debt retirement or equity buybacks.

In April, KMI management indicated that it planned to reduce net debt with the unexpected increase in earnings. But Kean also noted that there may be “incremental investment opportunities” this year. The “selective, not programmatic” approach to share repurchases would remain the same.

Raymond James & Associates Inc. analysts said they “can’t fault the industrial logic of the transaction, as Stagecoach should fit in well with KMI’s broader U.S. northeast natural gas-focused asset base.”

However, the deal, expected to close in 3Q2021, arrives in the middle of a debate around the base business trends at KMI given the uncertainties around its revised 2021 guidance, according to the Raymond James team, led by analyst Justin Jenkins. The analysts noted that investors interpreted the revised guidance as lower for the remainder of the year after backing out the 1Q2021 upside.

Crestwood, as 50% owner, would receive $612.5 million in cash proceeds. This, according to Raymond James, would “materially” improve the balance sheet and “accelerate the deleveraging process.”

Strategically, the deal reorients Crestwood as a more gathering and processing-focused midstream player and also eliminates concerns that Crestwood could be the acquirer of ConEd’s 50% stake, the Raymond James analysts said. They noted that KMI’s ability to operate the asset, rather than Crestwood, “is one reason this particular combination of transaction partners makes sense.”

Crestwood and ConEd were represented by TD Securities as financial advisor and Latham & Watkins LLP as legal advisor.