South Texas proved to be a sore spot for Kinder Morgan Inc. (KMI), as the company’s 2Q2021 earnings took a hit during an otherwise strong period in which the midstream giant made two substantial purchases. 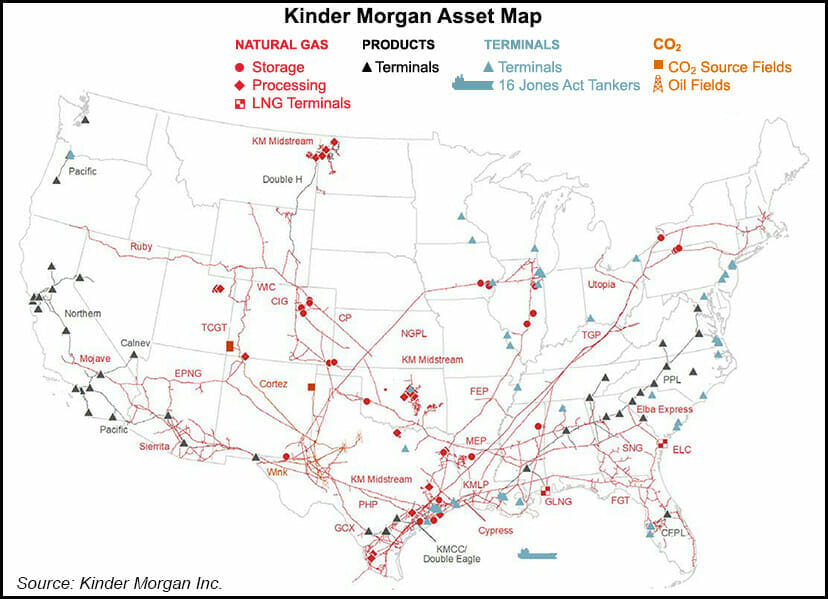 Houston-based KMI recorded a $1.6 billion, non-cash impairment related to anticipated lower volumes and rates on contract renewals on its South Texas assets. However, the natural gas pipelines, products pipelines and terminals all contributed stronger results, and the company is looking to enhance its service offerings with the two recently completed acquisitions that CEO Steven Kean said further strengthen KMI’s interconnected network of assets, but also position the company for participation in the energy transition.

“We continue to see strong long-term value in the assets and service offerings we have today, while also pivoting in an appropriate and value-creating way to the faster-growing parts of the energy business,” Kean said Wednesday on the 2Q2021 earnings call.

The company chief said KMI’s $310 million acquisition of Kinetrex Energy, a renewable natural gas (RNG) and small-scale liquefied natural gas (LNG) player, was a “rare platform investment in a highly fragmented market.” The acquisition, according to the chief, gives KMI “a nice head start” on working on the myriad potential RNG project candidates in the United States.

“We’ve got a lot of opportunity to build this business organically,” Kean said.

KMI brings several competitive advantages to the table, according to the executive, including its existing network and footprint as well as customer access. That, he said, would enable the midstreamer to develop and originate additional business in the voluntary and transport markets.

“We’ve got good project management expertise,” Kean said. “We’re actually looking at whether or not we can make some of the equipment that’s being deployed in these areas. We think we bring a lot to the table. We’re getting a good team as part of this acquisition, so we think we can expand this business organically and do it in a way that the returns are attractive.”

Kean noted that following the acquisition announcement, analysts tied its valuation to the price of renewable identification numbers (RIN). But the business, he said, generates D3 RINs which are created by blending ethanol made from cellulosic material like corn stover and wood chips into gasoline.

“Promoting more of those in the transportation fuel market has had bipartisan support, and even more support from the environmental community than conventional ethanol,” Kean said. While there is some “regulatory flexibility” in the Environmental Protection Agency’s hands, “there is an underlying statutory framework,” with bipartisan support, “combined with widely acknowledged greenhouse gas benefits, that further protects the value of this category of RINs, in particular. Having said that, we believe we’ll have the opportunity to mitigate our exposure to RINs pricing volatility.”

The acquisition, which includes 185 miles of pipeline and four natural gas storage facilities with a total working gas capacity of 41 Bcf, aligns with previous remarks by Kean about the growing value of storage, particularly in the wake of Winter Storm Uri in February. Several of KMI’s Texas storage facilities were “on maximum withdrawal for days” during the unprecedented winter blast.

“We’ve seen that start to show up in our commercial transactions,” the CEO said. “Storage will also become more valuable as more intermittent renewable resources are added to the grid.”

Kean pointed out that the Stagecoach system connects with Tennessee Gas Pipeline (TGP), a KMI subsidiary, as well as other third-party systems “in a part of the country that is constrained from an infrastructure standpoint and frankly, where it is difficult to get new infrastructure permitted and built.”

Even with the added focus on the energy transition, KMI’s core business remains front and center.

The company’s Natural Gas Pipelines segment saw higher contributions from the Texas intrastate systems and from the full in-service of the Permian Highway Pipeline (PHP). There were also increased volumes on the Hiland midstream systems in the Bakken Shale. These, however, were partially offset by lower contributions from the KinderHawk and Eagle Ford gathering and processing assets and from Fayetteville Express Pipeline (FEP).

Natural gas transport volumes were up 4% compared to the second quarter of 2020, according to KMI. In addition to PHP’s in-service, the company also saw an increase in volumes on TGP because of higher deliveries to LNG facilities, power plants and Mexican customers. Texas intrastate systems also recorded stronger volumes because increased Gulf Coast demand from industrial and LNG customers. Volumes also rose on the Elba Express pipeline system because of additional deliveries to the Elba Liquefaction project.

However, a continued decline in production in the Rockies resulted in lower volumes moving on the Colorado Interstate Gas Pipeline. FEP throughput, meanwhile, declined because of contract expirations. Natural gas gathering volumes were down 12% from 2Q2020 across several KMI systems, most notably the KinderHawk and Eagle Ford assets.

“That’s a huge increase versus the second quarter 2020,” Dang said. “LNG volumes also increased versus first quarter of this year by approximately 8%.” KMI’s total market share of LNG export volumes is about 48%.

Gas exports south of the border also increased, rising about 20% year/year. KMI’s share of Mexico volumes is about 54%, according to Dang.

The solid growth in exports isn’t expected to slow anytime soon, according to management. Kean remains “bullish” on the natural gas market, with another 23 Bcf, or 24%, of growth projected in the next 20 years. That’s “a pretty nice long runway, and a lot of that is driven by exports.”

Meanwhile, the map of where those facilities are set to come online is “lined up very nicely with our natural gas pipeline footprint,” he said. Looking at the period through 2030, 80% of the growth is in Texas and Louisiana, where KMI’s assets are “very well-positioned.”

As for the recent rise in gas prices — the August New York Mercantile Exchange contract closed in on $4.00/MMBtu Wednesday — the company chief said the market may need to wait a little longer for producers to adjust their activity plans accordingly. Although there has been “visible” growth in the U.S. rig count, exploration and production companies continue to exercise a “strong financial discipline” that is going to make the supply-side response to the higher prices “a bit more delayed relative to what we’re seeing on the demand side,” according to Kean.

“So I do anticipate a fairly tight supply-demand balance here for the next couple of years at least. And I think that means a higher price environment.”