While the U.S. State Department stopped short of endorsing the U.S.-to-Mexico Sierrita Lateral Pipeline being proposed by Sierrita Gas Pipeline LLC, it said it has “no objections” to a presidential permit being issued for the project.

Sierrita Gas Pipeline, an indirect subsidiary of Kinder Morgan Inc., is seeking authorization to build pipeline facilities to export natural gas to serve the power generation market in northern Mexico. The Sierrita Lateral Pipeline project (formerly known as the Sasabe Pipeline project)would be a 59-mile, 36-inch diameter lateral from El Paso Natural Gas’s (EPNG) system in Arizona to a point south of Tucson near the international border at Sasabe, AZ. El Paso is owned by Kinder Morgan (see Daily GPI, Nov. 16, 2012). The project is expected to have an estimated capital cost of $204 million, and will have the potential to deliver 200 MMcf/d of gas.

The proposed pipeline would interconnect with Sempra Energy’s Sasabe-Guaymas Pipeline at the U.S.-Mexico border to supply gas for electric generation. Sempra’s Gasoducto de Aguaprieta currently is securing the necessary permitting in Mexico to construct the new 36-inch diameter pipeline in the State of Sonora, Mexico.

Sierrita has asked FERC to act on its application by Feb. 7, 2014. It said full construction will need to begin no later than March 2014 in order to go into service by Sept. 30, 2014, which is the same in-service date as the Sasabe-Guaymas Pipeline in Mexico.

Sierrita said it will soon execute a 25-year transportation service agreement with MGI Supply Ltd. for the full design capacity of the project. MGI Supply is a unit of Pemex.

The facilities interconnect with KMTP’s intrastate pipeline in Texas and extend 878 feet to the border at the midpoint of the Rio Grande and then connect with affiliate Kinder Morgan Gas Natural de Mexico, which transports gas from the border to the Monterey area [CP13-94].

The current shipper customer of Kinder Morgan Mexico is Mexico’s Pemex, which buys gas at the U.S.-Mexico border from its affiliate, MGI Supply, to serve customers in the Monterrey area and to support its system throughout northeastern Mexico. In the United States, MGI Supply either purchases gas from KMTP at the border or ships gas to the border on KMTP’s intrastate system.

FERC in June also authorized Kinder Morgan’s EPNG pipeline to place in service its Norte Crossing facilities at the U.S.-Mexico border in El Paso County, TX. The facilities (1,500 feet of 36-inch diameter pipe) run underneath the Rio Grande to deliver up to 366 MMcf/d of gas to a new delivery interconnect with the Tarahumara Pipeline at the border, which in turn is to deliver the gas to new generation plants to be constructed in northern Mexico (see Daily GPI, June 18).

Concurrent with the development of the Sierrita Pipeline, the Comision Federal de Electricidad (CFE) has been actively developing pipeline facilities in Mexico. In October 2012, Sempra Mexico was awarded two contracts by CFE after a competitive bidding process (see Daily GPI, Oct. 24, 2012). The contracts clear the way for Sempra to build two pipe segments that would interconnect to the U.S. interstate pipeline system in Arizona and would provide gas to new and existing CFE power plants that currently use fuel oil.

The first segment, a 36-inch diameter, 310-mile pipeline, would run from Sasabe, south of Tucson, AZ, to Guaymas, Sonora, and would have capacity of 770 MMcf/d. It is expected to begin operations in late 2014. The second segment from Guaymas to El Oro, Sinaloa, is to be a 30-inch diameter, 200-mile pipeline with capacity of 510 MMcf/d. It is planned to begin operations in the third quarter of 2016.

Also to serve the Mexican power generation market, NET Midstream unit NET Mexico Pipeline LP is planning to build a 124-mile, 42-inch diameter gas pipeline to carry gas produced in the Eagle Ford Shale of South Texas to the Texas-Mexico border (see Daily GPI, Feb. 25). The project would be anchored by a long-term firm gas transportation agreement for up to 2.1 Bcf/d with MGI Supply.

NET Mexico would transport gas from the Agua Dulce Hub in Nueces County, TX, to a point near Rio Grande City, TX, in Starr County. The pipeline, which is targeted for service in December 2014, would supply gas from the Eagle Ford Shale to the expanding power generation and industrial markets in Mexico.

The proposed Sierrita Pipeline is part of an eruption of pipeline projects busting out throughout Mexico in response to its energy ministry’s master plan calling for stepped-up conversions and new generation plant construction of gas-fired plants that use low-priced U.S. gas.

At the same time, Mexico plans to step up exports of its own additional natural gas production to Central American markets, according to a partner in a well connected Houston energy law firm.

The conversion of Mexico’s power plants to natural gas is based on the country having a reliable source of natural gas, according to Sierrita. “However, the Mexican government, via the Secretaria de Energia (SENER), has clearly recognized that its national supply of natural gas, as well as the necessary natural gas infrastructure to deliver such supplies, does not support existing and future demand levels.

“In a recent SENER review of Mexico’s natural gas demand needs, the SENER noted that northwest Mexico is projected to require the importation of approximately 918 MMcf/d of gas by 2018,” Sierrita said. 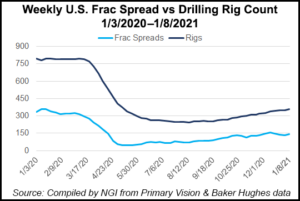 Schlumberger Ltd., the world’s largest oilfield services company, posted solid double-digit revenue growth and sequential margin expansion in North America, both onshore and offshore, in the final three months of 2020. During a conference call on Friday morning in Houston, CEO Olivier Le Peuch said the overall market position improved in 2020, despite the pressure…