Kinder Morgan Inc. (KMI) unit Tennessee Gas Pipeline Co. (TGP) will proceed with the market path segment of its Northeast Energy Direct (NED) project from Wright, NY, to Dracut, MA, the company said Thursday. The project is to be sized at the smaller end of its previously announced capacity range. 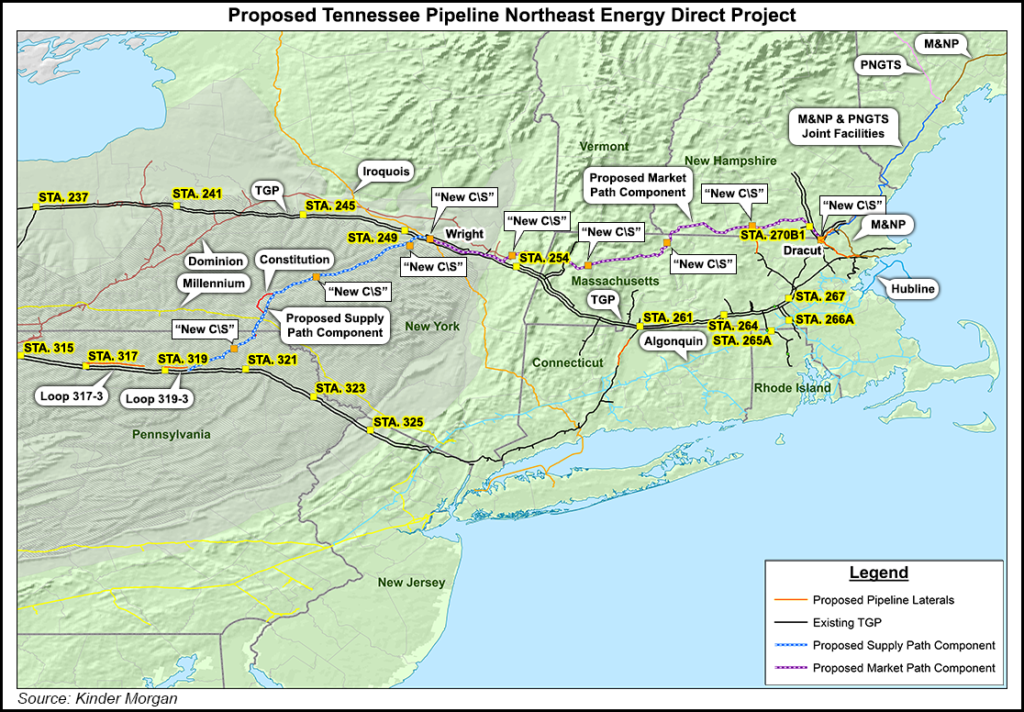 NED would extend the existing TGP pipeline. “At 30 inches in diameter, a 1.3 Bcf/d pipeline will serve the commitments we have received from New England local gas distribution companies (LDC) and commitments we expect to receive from other LDCs and electric distribution companies…” said KMI’s Kimberly Watson, president of the east region pipelines.

Since proposed in 2014, TGP has said that the NED project could involve a combination of 30-inch and 36-inch diameter mainline, and provide between 1.3-2.2 Bcf/d of incremental capacity.

“Our decision to proceed with the 30-inch pipeline option stems from continual outreach and dialogue that began in 2014, including ongoing negotiations with customers, reviewing various state initiatives designed to address the high cost and volatility of natural gas into the New England region, and continuing discussions with stakeholders…[W]e have made numerous adjustments to the proposed right-of-way in order to minimize potential impacts on nearby towns and communities, resulting in approximately 91% of the proposed NED market path segment being co-located along existing utility corridors…”

“While TGP is now moving forward with a 30-inch pipeline design, circumstances could arise in the very near term as more capacity commitments are made that would necessitate a design modification to a 36-inch pipeline design, and that would require us to file an amended application with the [Federal Energy Regulatory Commission],” Watson said. “TGP intends to file the certificate application for the project in October 2015 to meet the full design capacity of 1.3 Bcf/d.” With timely approvals, NED could enter service in November 2018.

That $3.3 billion for the market path portion of NED is now in KMI’s project backlog. Yet to be added to the company’s running tally of capital projects is NED’s supply portion, KMI CEO Steve Kean said during an earnings conference call Wednesday.

“We’re still working on the supply portion of that project. And we’ve made significant recent headway on that one as well, but not to the point where we’re ready to add it to the backlog,” he said. “When and if we do, that would be another $1.6 billion to $2.1 billion.”

As for the market path portion of NED, Kean said utility capacity commitments are still needing state regulatory approval. “…[W]e’re optimistic about the outcome of those reviews,” he said. “We’re comfortable going forward, based on the commitments we have and the progress toward the state approvals on those commitments.”

Kean also said there is value in short-term sales of capacity on NED during the winter months. Enough capacity has been signed for an accretive return, he said, “…but we fully expect to add commitments on the power side that will get us to a very attractive return.”