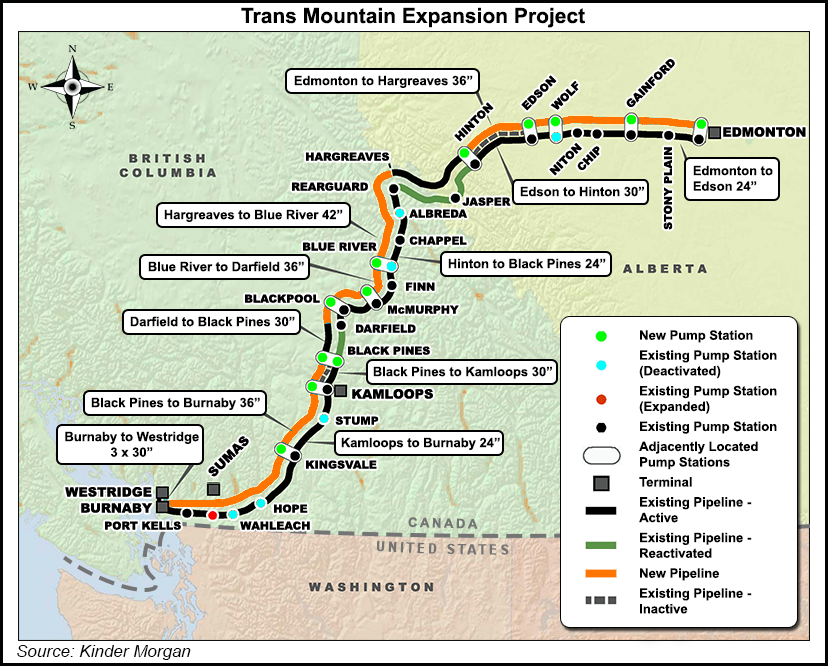 On top of protest lawsuits by environmental and aboriginal groups against approvals granted last fall by the National Energy Board (NEB) and federal cabinet, the plan to triple the line’s capacity to 890,000 b/d for C$7.4 billion (US$5.5 billion) faces a fractured provincial government in British Columbia.

Final results of BC’s May 9 election, after counting absentee ballots, confirmed the pro-pipeline Liberals were reduced to a 43-member minority in the 87-seat provincial legislature. The anti-pipeline New Democratic Party has 41 seats. The even more anti-pipeline Green Party holds the balance of power with three seats.

Just how stands taken in a heated campaign will translate into compromises needed to avoid another election for at least a year or two remains unknown. Political jockeying continues in the BC capital, Victoria, as the parties seek common ground on more issues than just the pipeline project across BC to Vancouver from the Alberta capital, Edmonton.

The Trans Mountain line dates back to the early 1950s, and most of the facilities additions would be done within the original right-of-way. But instead of safety, environmental and land-use details, popular resistance focuses on the project’s role in oilsands development and national aboriginal rights demands for native veto powers over resource industry activity.

The country’s constitution gives the federal government jurisdiction over projects that cross provincial or international boundaries. But a hostile province might be able to interfere with essential construction and operational services, such as access roads and power supplies, the document said.

Kinder Morgan made a final investment decision to go ahead on Trans Mountain expansion construction at the same time as the terms of the Canadian subsidiary’s initial public offering were announced. The share sale is intended to raise C$1.75 billion (US$1.3 billion) by the end of this month. A supplemental open season was completed in March.

While acknowledging political risks ahead, the pipeline company emphasized economic strengths of the project and its success in its national regulatory ordeal so far. Kinder Morgan Canada President Ian Anderson said in a statement, “Our execution planning is complete, our approvals are in hand, and we are now ready to commence construction activities this fall, generating thousands of direct jobs for Canadians, including significant benefits to Indigenous communities in Alberta and British Columbia.”

Most of the new pipeline capacity is supported by 10- to 15-year contracts with shippers. The additional deliveries are virtually all expected to originate in the northern Alberta oilsands, where thermal extraction operations are Canada’s biggest and fastest-growing natural gas consumer.

The project schedule calls for construction to start in September, after further NEB detailed route hearings, and for deliveries in 2019.