Cleveland-based Gas Natural Inc. said Tuesday that it would sell its Kentucky natural gas utility business for $1.9 million in cash to a small private company in the eastern part of the state. 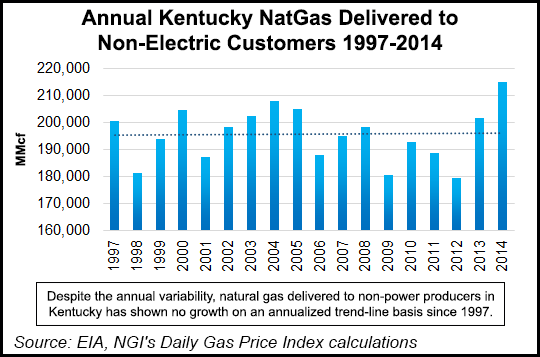 Gas Natural is a holding company with several subsidiaries that serve 68,000 customers in six states. Traded under the symbol EGAS on the New York Stock Exchange’s market for small-cap companies (NYSE MKT), it has recently announced a series of noncore divestitures to raise cash for a growth strategy aimed at expanding natural gas throughput in underserved markets such as North Carolina and Maine.

The company said its subsidiary, Public Gas Co., would sell its utility business in the state to Kentucky Frontier Gas LLC, which was established in 2005 and currently serves only about 4,000 customers in Floyd and Pike counties.

“With the proposed sale of our Kentucky utility, along with the pending sale of our Pennsylvania business and the recent divestiture of our Wyoming operations, we have measurably advanced our plan to rationalize noncore assets,” said Gas Natural CEO Gregory Osborne. “We plan to redeploy the capital from the sales to markets where we can focus on growth.”

Public Gas Co. distributes 147.4 MMcf annually within seven counties in Eastern Kentucky. The sale is subject to regulatory approvals. Gas Natural did not provide a timeline for the sale’s closing.

In July, the company sold its utility and pipeline assets in Wyoming to the South Dakota-based energy services company, Black Hills Corporation, for $17.1 million in cash. Details of Gas Natural’s sale of its Pennsylvania business have not been released.