Junex Inc., a junior oil and natural gas explorer based in Quebec City, said a horizontal oil well drilled two years ago into the Forillon formation in eastern Quebec continues to deliver strong results during a mandatory testing period, with cumulative production representing the largest oil recovery in the province’s history. 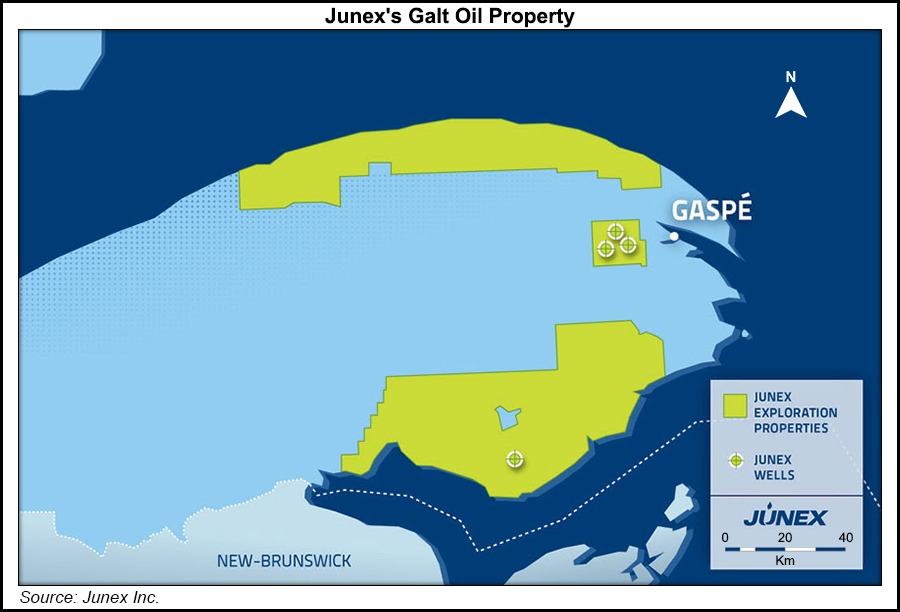 Junex said since the Galt No. 4 was completed in November 2014, cumulative production totaled about 14,100 bbl. During a recent 23-day period, when the company was deliberately attempting to keep production under 100 b/d, the well yielded 1,618 bbl of light sweet crude without a pump.

“To the best of our knowledge, the 23-day period is the longest period of continuous natural oil flow ever seen in a well drilled in Quebec,” said Junex CEO Peter Dorrins. “The production testing of this well has been the principal focus of our efforts at Galt because it is a key element as to the future development of the Galt light oil accumulation.

“The improved understanding of this well’s performance, when integrated with other information such as the 3D seismic data we acquired last year, has influenced the selection of the optimal locations for future wells on the Galt Oil property.”

The Quebec provincial government granted Junex a permit to drill the Galt No. 4 well in 2014 (see Shale Daily, July 3, 2014). The well, in a sparsely populated area about 20 kilometers (12.4 miles) from the town of Gaspe, is Junex’s first horizontal well from an existing vertical wellbore. The vertical wellbore was first drilled in 2012 to target the Forillon Formation.

Junex said a testing program mandated by the provincial government would continue until late November. During that time, the well is to produce at various controlled production rates over different portions of the horizontal wellbore targeting the Forillon formation.

“This production has been and will be through unassisted natural flow and/or by using the pump,” the company said. “Similarly, production testing operations may be temporarily suspended during this time to perform downhole well operations, including but not limited to the retrieval and replacement of downhole pressure gauges in the well.”

Junex completed a second well, Galt No. 5, last June. According to Dorrins, that well was shut in to record the buildup of formation pressure in the reservoir.

“[This] data will provide important details as to the reservoir characteristics in this well, including the potential productivity of this horizontal wellbore,” Dorrins said, adding that the Galt No. 5 “remains shut in for pressure buildup, which will also continue for some time. Once the shut-in period is ended, the downhole pressure gauges will be retrieved and the data analyzed. This will be the basis for determining the next steps for the Galt No. 5 well.”

Junex also forged a partnership (25% working interest) in early 2012 with undisclosed partners for about 2,219 gross acres in Schleicher County, TX, in the Permian Basin. The acreage is operated by Telesis Operating Co.

Quebec has moved slowly on shale development and hydraulic fracturing (fracking) as the provincial government’s position on the issue changes with each new regime.

In 2011, when the Liberal party was in power and Jean Charest served as premier, the Quebec government launched a two-year study of shale gas development and allowed fracking only for exploration purposes (see Shale Daily, March 10, 2011). But the Parti Quebecois (PQ), which came to power in 2012, had campaigned on a promise to shut down shale development and a moratorium was enacted in early 2013 (see Shale Daily, Feb. 8, 2013).

Despite the moratorium, PQ leaders in February 2014 created two joint ventures between the government and four oil and gas producers to drill wells on and offshore Anticosti Island at the outlet of the Saint Lawrence River in the Gulf of Saint Lawrence across from Gaspesie (see Shale Daily, Feb. 21, 2014).

The Liberals returned to power after elections in April 2014, this time with Philippe Couillard as premier. Since then speculation has grown that the province may allow fracking in other parts of the province, although Couillard has been on record as saying he opposes the practice in environmentally sensitive areas (see Shale Daily, April 8, 2014).