The Energy Information Administration (EIA) on Thursday reported a weekly natural gas storage injection that came in on the low side of expectations, and futures picked up some bullish momentum on the news. 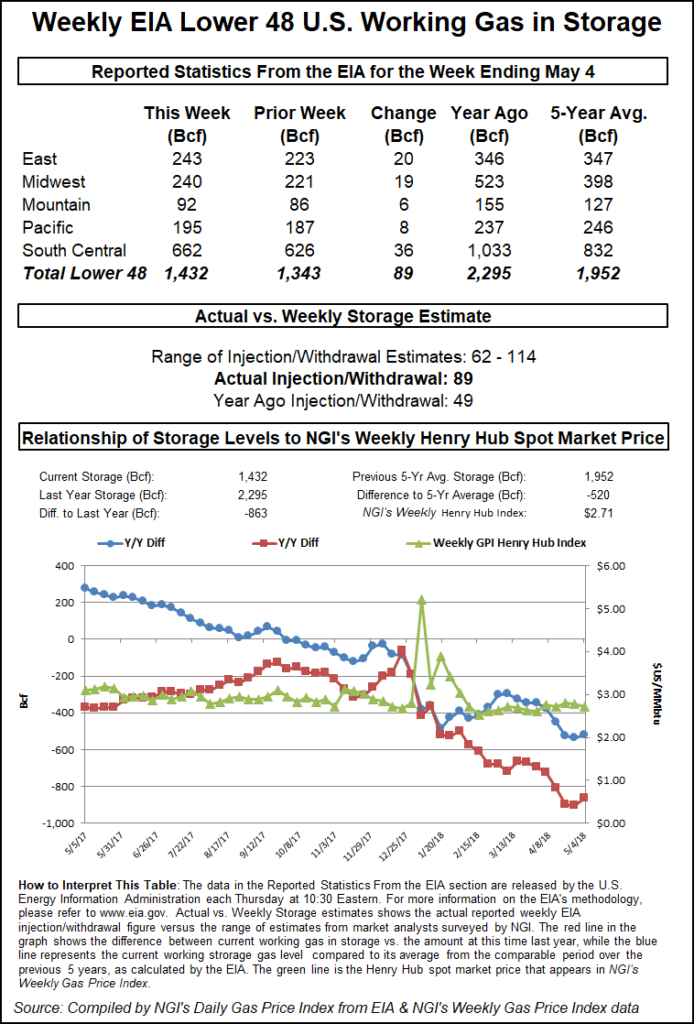 EIA reported an 89 Bcf injection into Lower 48 gas stocks for the week ending May 4, slightly tighter versus consensus estimates for a build in the low- to mid-90s. Last year, EIA recorded a 49 Bcf injection. The five-year average is a build of 75 Bcf.

Shortly after the 10:30 a.m. ET release of the final number, the June contract popped about 3 cents to trade above $2.785 after already gaining a few cents earlier in the session. By 11 a.m. ET, June was trading around $2.795, up about 5.8 cents from Wednesday’s settle.

Prior to Thursday’s report, consensus estimates had the market looking for an injection somewhat larger than the actual figure.

A Reuters survey of traders and analysts on average had predicted a 91 Bcf build, with responses ranging from 75 Bcf to 114 Bcf. A Bloomberg survey had produced a median 90 Bcf injection, with a range of 62 Bcf to 114 Bcf. IAF Advisors analyst Kyle Cooper had called for a 96 Bcf build, while Intercontinental Exchange EIA storage futures settled Wednesday at an injection of 94 Bcf.

Bespoke Weather Services had estimated a 94 Bcf build and said it viewed Thursday’s report as “slightly bullish” for a market that could see further support from cooling demand if recent above normal temperatures persist into late May or early June.

“The print missed by just 5 Bcf, but there were worries that an even larger injection could be reported given how loose data was last week,” Bespoke said. “Instead, we see a print that should help firm up support and may allow prices to attempt a break above the $2.80-2.82 level with any significant cooling demand increases.

“The market was range-bound, not moving much through the week as it awaited a better indication of balance, and this more supportive print certainly skews risk a bit upwards,” the firm said. “Large injections remain, and prices may pull back still, but any dips to $2.70-2.72 are likely buys.”

Total working gas in underground storage ended the period at 1,432 Bcf, versus 2,295 Bcf a year ago and five-year average inventories of 1,952 Bcf. The year-on-year deficit shrank week/week from minus 903 Bcf to minus 863 Bcf, while the year-on-five-year deficit decreased slightly from minus 534 Bcf to minus 520 Bcf, EIA data show.

By region, the largest injection came in the South Central at 36 Bcf, including 14 Bcf injected into salt and 22 Bcf into nonsalt. The East saw a 20 Bcf build for the week, while 19 Bcf was injected in the Midwest. The Mountain and Pacific regions saw builds of 6 Bcf and 8 Bcf, respectively, according to EIA.