Natural gas futures on Thursday could not break out of a narrow range of gains and losses following a benign government inventory report and ongoing fallout from the ransomware attack on a major pipeline that is vital to the East Coast. 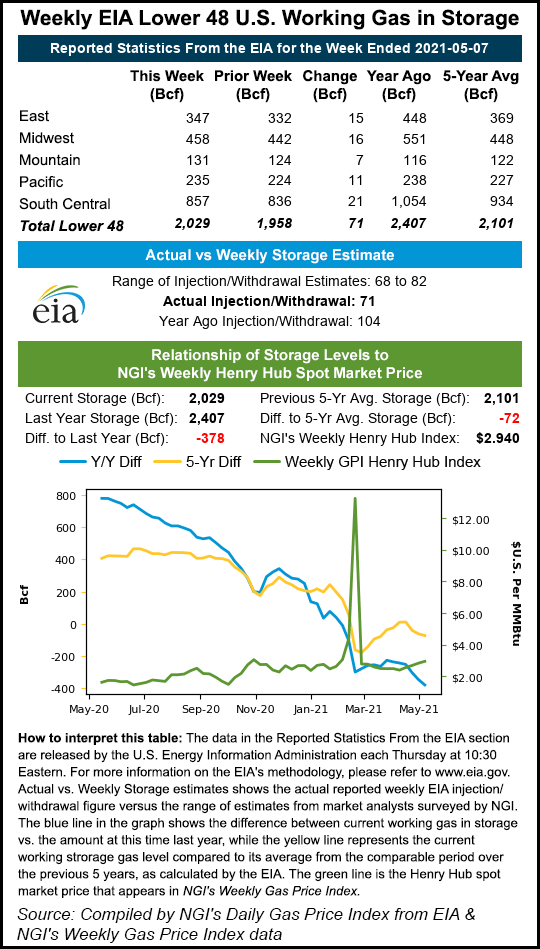 The June Nymex contract crept in and out of the green throughout trading Thursday and ultimately settled at $2.973/MMBtu, up four-tenths of a cent day/day. July inched ahead seven-tenths of a cent to $3.025.

The U.S. Energy Information Administration (EIA) reported an injection of 71 Bcf natural gas into storage for the week ended May 7. The agency posted an implied flow of 75 Bcf – on par with expectations – but it reclassified the amount of working gas in storage previously by 4 Bcf, resulting in the net 71 Bcf print.

The result compared favorably to the five-year average build of 82 Bcf and the year earlier injection 104 Bcf. It was roughly on par with the median estimates found in polls.

Prior to the report, a Bloomberg survey showed a median 75 Bcf injection expectation, while a Reuters poll landed at a median estimate of 77 Bcf. The average forecast in a Wall Street Journal survey was 73 Bcf. NGI’s model forecasted an 82 Bcf injection.

The latest build lifted inventories to 2,029 Bcf, though that is lower than the year-earlier level of 2,407 Bcf and the five-year average of 2,101 Bcf.

The EIA print “is still reflective of a rather tight supply/demand balance, but our thesis is that balances will loosen in the next couple of weeks,” Bespoke Weather Services said. “The market may be sensing this as well.”

The firm said that while cool weather early in May across swaths of the Midwest and Northeast boosted natural gas use at times, weather-driven demand is expected to fade in the second half of the month as comfortable temperatures spread across northern regions. Larger storage increases are expected to follow.

Looking ahead to next week, early injection estimates are hovering around 70 Bcf, though analysts expect injections to rise closer to the triple-digit level by the end of May.

Other fundamentals are generally holding strong. Production and liquefied natural gas (LNG) levels each dipped lower this week amid ongoing maintenance work – common during the spring shoulder season – effectively offsetting each other.

Production declined early in the week amid pipeline maintenance in the Northeast, though that work was scheduled for completion this week, and output had already recovered to recent averages around 90 Bcf on Wednesday.

LNG feed gas hovered near 10 Bcf on Thursday, well below the 11 Bcf level – or higher – that has become the norm this spring. EBW Analytics Group, however, attributed the decline to a Sempra Energy maintenance event at a Cameron LNG facility unit. EBW analysts said the unit is expected back online this week and export volumes would likely bounce back quickly. They cited continued robust Asian and European demand for U.S. LNG.

Demand for U.S. exports is running high following a harsh winter that cut into supplies in Europe and northern Asia.

“We suspect both declines to be brief,” Bespoke said of dips in LNG and production resulting from maintenance. “Outside of that, we see little new in the data.”

Georgia-based Colonial said after markets closed Wednesday that it initiated the restart of full operations – six days after hackers infiltrated the company’s servers and demanded a ransom. The attack forced Colonial to shut down the main lines of its pipeline system last Friday. The system supplies about 45% of the East Coast’s gasoline, diesel and jet fuel.

While the attack was on Colonial’s information technology (IT) system, not the pipeline itself, Colonial shut down the pipeline until it was certain it could safely manage the flow of fuel.

Colonial said that, by midday Thursday, “each market we service will be receiving product from our system,” providing a dose of relief. But the company also said it would take several days for supply levels to return to normal.

In the meantime, markets across the Southeast grappled with near-term gasoline shortages, resulting in panic buying and long lines at stations. Half or more of the gasoline stations in North Carolina, South Carolina, Georgia and Virginia reported running out of supplies, according to Gas Buddy, which tracks supplies and prices at stations nationally.

While Colonial does not transport natural gas, its tribulations raise concern about the energy sector’s overall vulnerability to cyberattacks and expensive ransom demands.

Bloomberg News reported Thursday that Colonial paid a nearly $5 million ransom, delivered via untraceable cryptocurrency, before hackers provided a decrypting tool to restore the company’s IT network. The Federal Bureau of Investigation said organized crime group DarkSide, which is believed to operate from Eastern Europe, executed the ransomware attack.

“The incident could rekindle energy security risk perceptions on Capitol Hill” – in addition to outraged consumers – “that largely abated as the U.S. became a net energy exporter,” analysts at Clearview Energy Partners LLC said. This could ultimately result in new regulations.

“That the latest disruption emanated from the midstream rather than the upstream seems unlikely to engender a voter embrace of pipelines,” ClearView added. “Put another way, supply scarcity and infrastructure vulnerability could have the same effect: making end-users wary of the energy on which they depend, and unhappy about it once again.”

Next-day cash prices lost ground for a third consecutive day as chilly air moved out of the Midwest and East, leaving pleasant conditions.

Spot prices on Thursday declined across the central United States and in the Northeast.

Weather-driven demand is expected to further dissipate as high temperatures in the Midwest and Northeast settle into a comfortable range between the 60s and 80s – too warm to get furnaces cranking but not quite hot enough for air conditioners to hum all day either.

The West, including parts of California, and the Southwest could experience highs in the 90s or even low 100s next week, National Weather Service data show, galvanizing some summer-like demand in those regions next week.

Outside of the West, however, “confidence stays lower than average, given the tendency for models to be biased too warm in the medium range lately,” Bespoke said. This is “likely due to the upcoming strong rise in the global angular momentum anomaly, which in layman’s terms simply means more of an El Niño-ish flavor in the global atmosphere, a regime that is not as conducive for strong heat” before June.

Looking into next month, DTN’s forecast shows gas-weighted degree days holding near the 30-year average, though below the strong demand that has become more typical in recent years.

“The natural gas market has proven relatively sensitive to weather forecasts for the shoulder season — heightening the stakes for what is currently predicted to be the second coolest June of the past decade,” EWB said.

That noted, the 2021 Farmers’ Almanac extended forecast calls for above-average heat across two-thirds of the Lower 48 this summer, with lofty temperatures arriving in July and extending into September.

“While typically the hottest weather can be expected in late July or early August, this year’s summer heat could peak in late August, into early September,” the Almanac said.