Natural gas futures on Tuesday bounced back from the prior session’s losses, as export demand and other key fundamentals held strong, while a critical oil pipeline signaled it could restore operations this week following a ransomware attack. 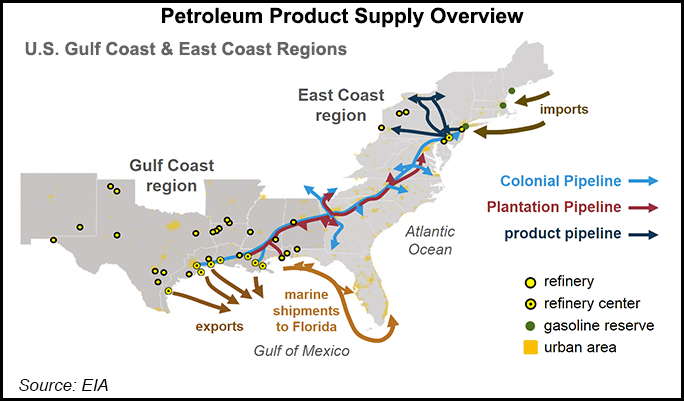 Each had declined 2.6 cents on Monday amid worries about the cybersecurity breach involving Colonial Pipeline Co. The company operates a key delivery system spanning from the Gulf Coast to the East Coast for transportation fuels and other refined petroleum products.

Liquefied natural gas (LNG) levels again topped 11 Bcf on Tuesday. Feed gas volumes have held above the 11 Bcf and near record levels for eight consecutive days as European and Asian demand for U.S. exports of the super-chilled fuel are holding strong.

EBW Analytics Group estimated that LNG feed gas demand has averaged 2.2 Bcf/d higher year-to-date when compared with the same period in 2020, “with comparisons only projected to grow further into mid-summer.”

What’s more, EBW analysts said, markets are soon to begin focusing on expectations for summer heat and the onset of steady national cooling demand. A “renewed upward price trajectory is likely as summer weather begins heating up,” the analysts said.

Bespoke Weather Services said the domestic demand outlook is uneven, with near-term demand holding up early this week as cool shots and chilly rains pepper the Midwest and parts of the East. Heating demand is expected to fade by next week, however.

“Things do moderate beginning this weekend” and “we are just looking at near-normal demand through late month,” Bespoke said.

That noted, Bespoke and other forecasters generally expect above-average temperatures this summer, given weather patterns and, equally important, a spate of hot summers in recent years. Summer 2020 ranked as the fourth hottest on record, according to the National Oceanic and Atmospheric Association. Driven by intensifying summer heat, six of the hottest years globally developed in the past decade.

Given the weather outlook and the pace of exports, the U.S. Energy Information Administration (EIA) on Tuesday forecasted natural gas spot prices at Henry Hub would average $3.05/MMBtu in 2021. The agency said spot prices this year are on track to far exceed the 2020 average of $2.03.

Meanwhile, traders on Tuesday looked past the ransomware attack on Colonial after the company said it had begun to reopen parts of the system. It aims to bring its main lines back by the end of this week.

In televised comments made in the White House briefing room, Energy Secretary Jennifer Granholm on Tuesday said that Colonial executives had assured her the company would be able to relaunch its main line by late Wednesday and resume full service within days.

The pipeline moves about 45% of the East Coast’s fuel. It shut down Friday after hackers broke into the company’s servers, encrypted its data and demanded a ransom to restore access.

The Federal Bureau of Investigation confirmed in a statement that DarkSide, a criminal ransomware group based in Eastern Europe, was behind the cyberattack. The news rattled markets on Monday.

While the Colonial system does not transport natural gas, the cyberattack has raised worries about the vulnerability of the U.S. energy system more broadly. Rystad Energy analyst Louise Dickson said the market was worried about “such an event being repeated and about the severity of future attacks.”

Analysts said while concerns eased Tuesday, they could remerge during trading in coming days if Colonial does not continue to make swift progress toward restoring full operations.

“The attack on Colonial comes at a critically important time for the U.S. refined products sector,” said RBN Energy LLC analyst Housley Carr. “After more than a year of Covid-related demand destruction for motor gasoline, diesel and jet fuel, economic activity and mobility have been rising sharply in recent weeks as the number of vaccinated Americans has increased, constraints on businesses have eased, and — to put it bluntly — people are itching to get out again.”

While traders took the news in stride Tuesday, consumers responded with a degree of panic, with news reports of long lines at gasoline stations in the Southeast and rising prices at the pump. The concern is that, should the Colonial system remain in limbo, fuel shortages could spread across the East.

The national average for a gallon of gasoline rose to $2.98 on Tuesday, according to AAA Travel, up 8 cents so far this week.

After a strong gain on Monday amid unseasonably cool temperatures in the nation’s midsection and East, spot gas prices were mixed on Tuesday.

Hubs in the Midwest and Northeast gave back gains made a day earlier, while prices continued to climb in the West ahead of an early heat wave expected in parts of California and the Southwest this week.

Cool air and scattered rain showers were expected to persist in the Midwest and Northeast on Wednesday and Thursday, with lows in the 30s and 40s. Maxar’s Weather Desk said that presented the potential for what could prove a final dose of heating demand.