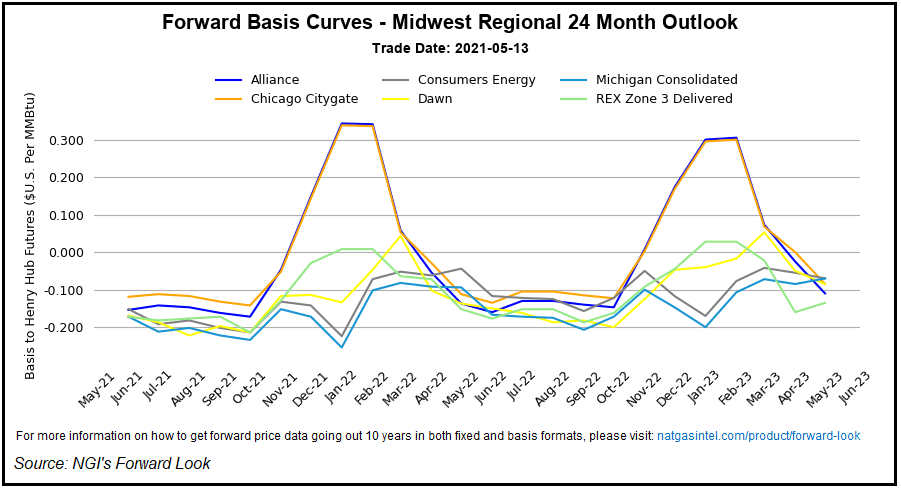 Both the domestic and European weather models Friday showed “a rather bearish pattern the next two weeks as near-perfect highs of 70s and 80s rule most of the country,” NatGasWeather said, explaining the headwinds bearing down on both cash prices and futures.

“The failure for more impressive heat to arrive by the start of June could lead to the natural gas markets getting increasingly impatient,” the firm added. It also noted that liquefied natural gas (LNG) feed gas volumes were relatively weak on Friday – around 10 Bcf for a third consecutive day.

NatGasWeather said the LNG slump was likely because of maintenance work, as opposed to a drop in demand, but the recent declines nevertheless raised eyebrows.

EBW Analytics Group CEO Andy Weissman agreed, noting that feed gas demand had tapered off across the Gulf Coast over the past week – coming down from near-record highs above 11 Bcf/d.

Sempra Energy, he noted, confirmed maintenance work on one train at a Cameron LNG facility, while the Texas Commission on Environmental Quality reported that a lightning strike caused a temporary outage at the Freeport facility. He also noted that feed gas flows at Sabine Pass had also ticked lower, likely because of maintenance work. But he said this was almost certainly a “temporary blip” – enough to help keep futures in check to close the week – but “not the beginning of a trend toward lower demand.”

Weissman said demand in Europe and Asia for U.S. LNG exports remains robust, and is expected to hold strong through the summer.

“Despite the stumble, flows remain 3.8 Bcf/d higher year/year,” Weissman said Friday. “With sky-high premiums at international benchmarks relative to Henry Hub, LNG will not be constrained by insufficient margins this summer. As shoulder-season maintenance fades, feed gas demand could rebound towards 12.0 Bcf/d.”

That helps explain why, Friday’s trading aside, natural gas futures advanced three times this week and hover near the $3.00 level at a time of year when weather-driven demand is light.

The market’s resilience “is carrying it through a period of very low demand,” Weissman said. “Once air conditioning demand starts to ramp up, Nymex futures could soar.”

While government inventory reports are likely to turn bearish late in May – given expectations for comfortable temperatures and only modest cooling demand – analysts noted that the latest U.S. Energy Information Administration (EIA) storage report proved a touch bullish. The upcoming print on Thursday could as well, given pockets of late spring chills early this month.

EIA reported an injection of 71 Bcf into U.S. natural gas storage for the week ended May 7. The agency posted an implied flow of 75 Bcf, but it reclassified the amount of working gas in storage previously by 4 Bcf, resulting in the net 71 Bcf print.

The result compared favorably to the five-year average build of 82 Bcf and the year earlier injection 104 Bcf.

Analysts at Tudor, Pickering, Holt & Co. (TPH) also noted that the latest EIA result was bullish versus seasonal norms, “widening the storage deficit to 5% versus the five-year average.”

The South Central region “continues to be an area worthy of additional focus, with four consecutive below normal builds,” taking storage to 9% lower than the five-year average, TPH analysts said.

LNG volumes, pipeline exports to Mexico and industrial demand “are all contributing to strong demand in the South Central region, which also has limited coal-to-gas switching capacity to serve as a correcting mechanism, creating a particularly strong setup for regional hubs (Henry included) this summer.”

The TPH team is modeling a 50 Bcf injection with the coming EIA storage report, below the five-year average of 84 Bcf.

Colonial Pipeline Co., meanwhile, reiterated Friday that it restarted its full system after a ransomware attack a week earlier – the restart process started late Wednesday – but it noted it would take several more days for its supply chain to return to normal.

As of Friday, Colonial, which moves gasoline, diesel and jet fuel from Texas to the East Coast, said its system was about five days behind schedule. Resulting fuel shortages from the Colonial shutdown were likely to drift through the weekend.

While the company’s system does not move natural gas, its challenges over the past week raised concerns about the broader energy sector’s vulnerability to cyberattacks.

Spot gas prices failed to find momentum Friday and moved lower as they did the three prior trading sessions.

There were small pockets of gains but overall light weather demand kept progress at bay. Prices dropped throughout the Midwest as the last remnants of a late spring cool shot pushed out of the region.

Prices also sunk in the Northeast. Daytime temperatures had dipped into the 50s early in the week, fueling some heating demand. By Friday, however, highs hovered in the 70s.

Out West, where prices proved volatile this week despite forecasts for robust cooling demand, Kern Delivery gave back 28.0 cents to $2.755 and SoCal Citygate plunged 55.5 cents to $2.890.

NaGasWeather said to expect much more of the same in coming days as the “northern U.S. will warm into the very nice upper 60s to lower 80s…as high pressure builds.” States across the South “will also be mostly comfortable with highs of 70s and 80s, with only locally 90s over portions of southern Texas and Florida.”

The West, however, will be “warm to very warm” with highs ranging from the 70s all the way into the 100s in the Southwest deserts, the firm said in its Friday outlook to May 20.