The June Nymex natural gas futures contract rallied toward its expiration on Thursday, pushing above $9.401 in intraday trading and reaching the highest level since 2008. Even as traders digested a weak storage print and renewed concerns about a supply crunch, many took profits in the final hour of trading that ultimately sent futures into the red. June settled at $8.908/MMBtu on Thursday, down 6.3 cents day/day. 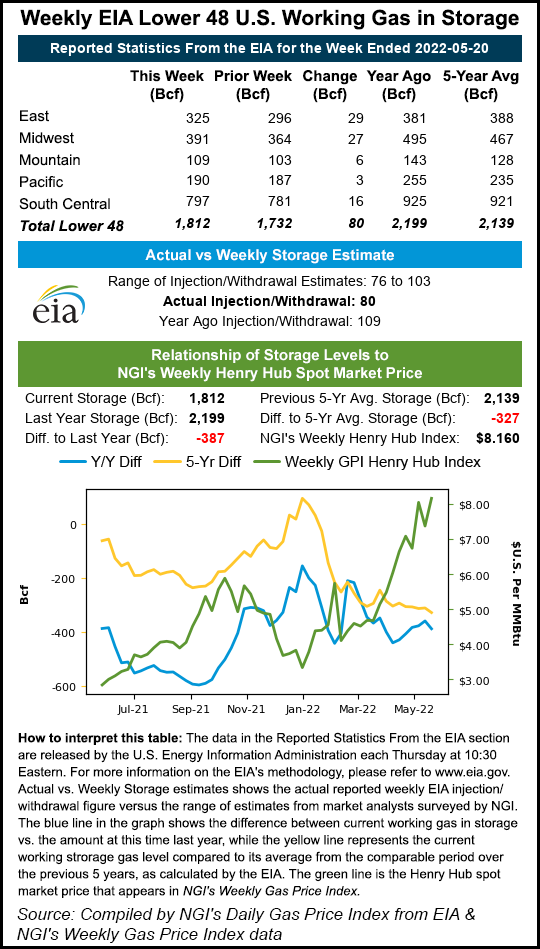 “It has been a remarkable month” for the June contract, analysts at Mobius Risk Group LLC said.

Still, bulls have plenty on their side as summer approaches.

Forecasts called for strong cooling demand to start June, marking the unofficial onset of a summer that multiple outlooks show will feature above average temperatures nationally.

Countries across the continent are moving with haste to distance themselves from Russia’s gas because of the Kremlin’s invasion of Ukraine. This has punctuated already strong European demand for U.S. exports after a cold winter left supplies light.

At the same time, U.S. production has failed to maintain momentum through the spring, hindering utilities’ collective ability to stow away excess supplies needed for next winter.

Fundamentals suggest there is no end in sight for the conditions that sent prices surging in May, Enverus Intelligence Research analysts said. Along with LNG, Enverus senior vice president Al Salazar highlighted limited gas-to-coal switching for electric generators amid the shift to cleaner-burning energy sources.

The U.S. Energy Information Administration (EIA) on Thursday reported an injection of 80 Bcf natural gas into underground storage for the week ended May 20. The result came in well below market expectations and historic norms, compounding the supply/demand imbalance worries.

Additionally, production proved modest nationally. It hovered around 94 Bcf during the covered week – as it has again this week — notably below the roughly 97 Bcf level analysts say may be needed to meet summer cooling demand and fortify stockpiles.

By region, the East and Midwest led with increases of 29 Bcf and 27 Bcf, respectively, according to EIA. The South Central reported 15 Bcf injection into nonsalt facilities. Salt supplies, however, were flat. Mountain region stocks increased by 6 Bcf, while Pacific inventories rose by 3 Bcf.

Early estimates for the week ending May 27 submitted to Reuters ranged from injections of 69 Bcf to 100 Bcf, with a mean increase of 91 Bcf. That would compare bullishly with a five-year average injection of 100 Bcf.

The latest EIA print “points to precariously low end-of-season storage levels if we cannot make, and sustain, significant gains in production over the next several weeks,” Bespoke said.

Next-day cash prices dropped for the first time this week amid a brief reprieve from widespread heat.

Following a round of milder conditions late this week, however, NatGasWeather said temperatures were poised to climb back into the 80s in the Midwest and higher in other regions by the weekend.

Southern and eastern markers were expected to warm into the 80s and 90s this weekend through early next week. In the South, this is expected to include 100s over portions of Texas and the Southwest deserts, the firm said.

Maxar’s Weather Desk, in its latest forecast, predicted toasty temperatures in the Midwest and along the East Coast during the six- to 10-day time frame, running from Tuesday through June 4.

While hubs in California posted modest declines Thursday, prices remained elevated and upward pressure is expected to persist this summer.

An extended drought there could cut the state’s summer electricity generation from hydropower nearly in half compared with normal precipitation conditions, according to an analysis by the U.S. Energy Information Administration (EIA).

EIA expects the hydropower slump will lead to an 8% increase in California’s electricity generation from natural gas this summer.

“Our study shows that a significant decrease in hydropower generation this summer could lead to higher electricity prices,” said EIA Administrator Joe DeCarolis.