Natural gas futures faltered on Wednesday, ending a three-day rally ahead of expectations for a more substantial build in underground inventories with this week’s government storage report. 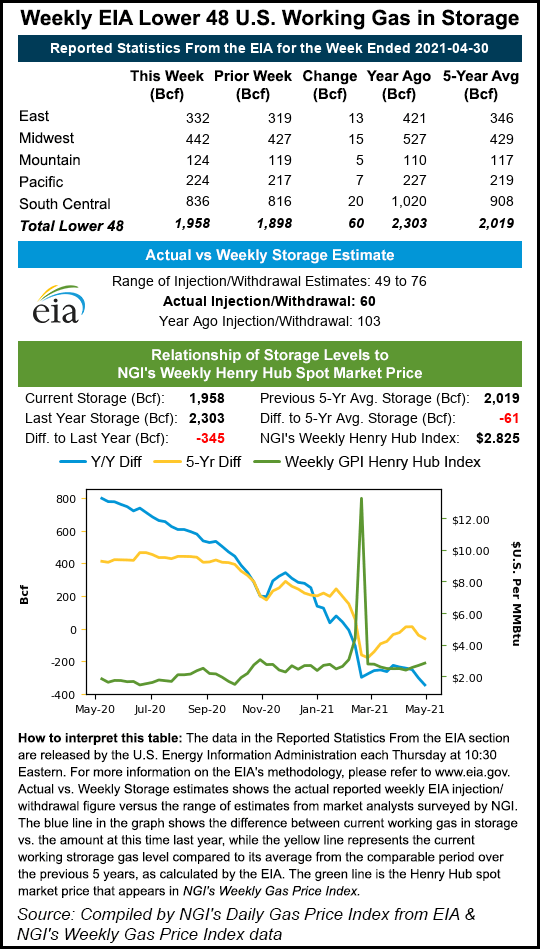 NGI’s Spot GasNational Avg. lost ground for the first time this week, declining a half-cent to $2.760.

The U.S. Energy Information Administration (EIA) on Thursday is expected to report a storage injection for the week ended April 30 that could be more than four times greater than the prior week. If the result falls in line with projections, it would actually compare favorably to historic norms. However, traders effectively moved to the sidelines Wednesday to wait out the potential for a bearish surprise.

A Bloomberg survey Wednesday showed a median estimate for a 66 Bcf injection, with predictions ranging from 49 Bcf to 76 Bcf. Estimates generated by a Reuters poll spanned increases of 49 Bcf to 76 Bcf, with a median of 65 Bcf. The Wall Street Journal’s weekly survey showed estimates ranging from increases of 52 Bcf to 70 Bcf, with an average of 62 Bcf.

Last week’s report showed a 15 Bcf injection for the week ended April 23. That, however, was notably lighter than normal for this time of year, leaving U.S. inventories at 1,898 Bcf — 302 Bcf lower than a year earlier and 40 Bcf below the five-year average.

Median estimates for the April 30 week, while much higher, still compare favorably to recent history. EIA recorded a 103 Bcf build in the comparable week of 2020, while the five-year average injection is 81 Bcf.

Bespoke Weather Services predicted a 71 Bcf build, which it characterized as bullish. However, it said markets may have pulled back after solid gains for futures in recent weeks. The firm cited both the possibility of a surprise result and the likelihood of bigger injections in coming weeks as weather-driven demand is often modest in mid-May.

Bespoke said an increase in the low 70s Bcf would still point to tight supply/demand balances, “though we do have some larger injections on the way and do still believe that the large price rise over the last few weeks will induce some loosening. The market likely needs a new bullish catalyst to break through the $3.00 level.”

EIA is scheduled to release its latest storage assessment at 10:30 a.m. ET Thursday.

Pipeline exports to Mexico have been strong and steady in recent weeks, while liquefied natural gas (LNG) levels continue to hold near record levels. Forecasts are calling for elevated demand through the summer and beyond amid supply shortages in Europe and Asia.

A total of 28 countries imported U.S. LNG in April, a record number for a single month, according to Bloomberg data. The previous record of 24 was set in March.

The company expects ongoing LNG market tightening. “We discussed over the last few years that we viewed 2021 as a transition year to a tight market,” Chief Commercial Officer Anatol Feygin said on an earnings call with analysts Tuesday. “That has played out so much faster than we expected.”

Rystad Energy this week also said it forecasted a continuously tightening market until 2024 as demand for U.S. LNG continues to grow. Strong export volumes have tightened balances in recent weeks, along with several rounds of cold spells in April that galvanized seasonally strong residential heating demand.

While fully embedded in the spring shoulder season, weather-driven demand remains a factor early in May as well. Bespoke on Wednesday modestly increased its gas-weighted degree day projections for the next two weeks. The firm cited heating degree days (HDD) “in the Midwest to Northeast this weekend into the start of next week.”

Analysts at The Schork Report said the Nymex prompt month has failed to close above “the $3.00 psychological barrier” yet this week, but most “indicators remain impressively bullish” for this time of year.

Spot gas prices declined on Wednesday despite chilly air and cold rains in the Midwest and Northeast, where highs have hovered in the 50s and 60s.

Forecasts called for bouts of unseasonably cool air in parts of Texas and the Southeast this week as well.

Next-day prices climbed across all of those regions early in the week but pulled back slightly in most of them on Wednesday.

Declines in the Southeast were notable, though still modest at most hubs.Dominion Energy Cove Point fell 5.0 cents to $2.750, whileFlorida Gas Zone 3 declined 7.0 cents to $3.000.

The Northeast, where prices climbed at most hubs, was the exception to the rule Wednesday.Tenn Zone 6 200L was a leader in the region, rising 20.5 cents to $2.870.

Looking ahead to the remainder of this week and into next, Maxar’s Weather Desk’s Steve Silver, senior meteorologist, said bouts of relatively cold overnight lows remained in the cards over swaths of the central and eastern United States.

“Below and much below-normal temperatures encompass most of the eastern half” of the Lower 48, he said. “Changes to the forecast are less significant in the West, where aboves are in California early and expand inland during the mid to late period.”