Natural gas futures kicked off the trading week Monday on a sour note as forecasted weather demand eased, production ticked up and power burns were light. 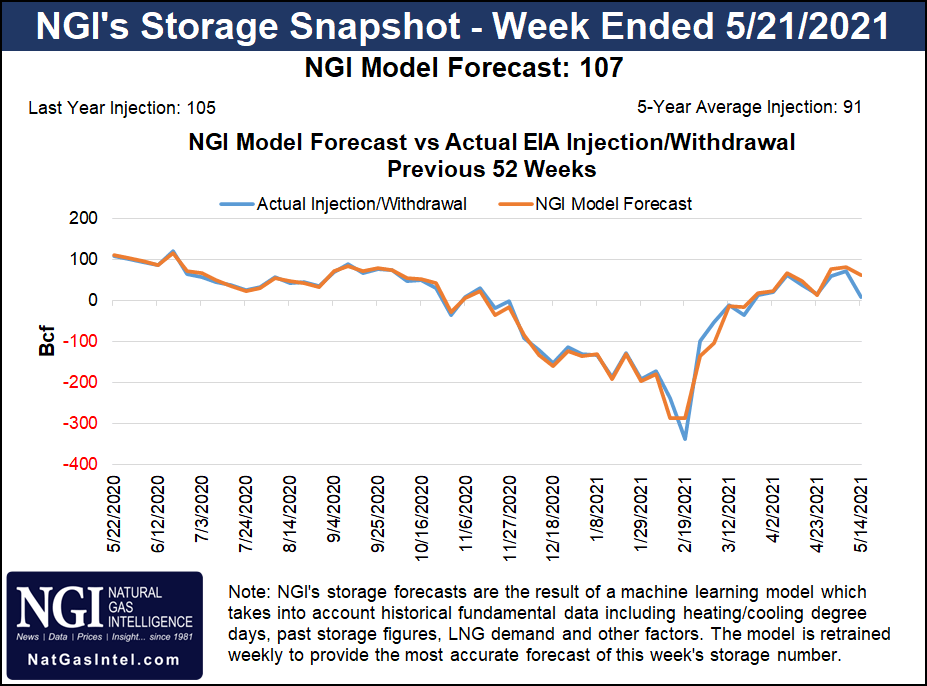 Both the American and European weather models on Monday showed cooler shifts by the coming weekend and into the start of next month. While actual temperatures this week were expected to rise above normal over parts of the East, highs were forecasted to peak by Friday and then cool notably over the long Memorial Day weekend ahead.

Commercial and industrial demand is also expected to taper off over the three-day weekend, as businesses and industrial operations close or scale back hours for the holiday. The outlook weighed on futures.

After expectations last week for heat through the end of May, forecasts on Monday fixated on “a cooler trough” that could result in “below normal temperatures showing up in the Midwest and East,” Bespoke Weather Services said. “This cooler period is sandwiched between the heat coming later this week, which now peaks Thursday into Friday…and some above normal heat as we move to and beyond June 5, though the strongest heat in that period is actually out in the West.”

“While the change is definitely quite bearish for overall natural gas demand compared to Friday, it does still fit into the theme we expect to see in the month of June, where there is variability, but when totaled up, we arrive at a month that features slightly above normal demand on the national level,” Bespoke added.

The firm noted that liquefied natural gas (LNG) volumes held strong on Monday at around 11 Bcf, but it also said natural gas output was up to start the week.

“We see production almost reaching 91 Bcf, which is on the higher end of the range it has been in over the last several months. LNG remains strong, but power burns still look weak, weather adjusted,” Bespoke said. “…After next week’s cooling, we are not convinced of massive downside risks ahead but can see a continued slide down to the $2.80 level” for the prompt month.

Additionally, as a result of the “drastic cooler change” in the forecast, two of the next three Energy Information Administration (EIA) storage reports are now likely to show triple-digit injections, according to Bespoke.

Looking ahead to Thursday’s EIA report, Bespoke expects a storage build of 106 Bcf for the week ended May 21. NGI’s model is calling for a 107 Bcf injection. That would eclipse the 105 Bcf injection recorded for the year ago period and exceed the five-year average build of 91 Bcf.

Analysts at Tudor, Pickering, Holt Co. (TPH) noted that last week’s EIA print of 71 Bcf proved bearish relative to expectations for an injection around 60 Bcf. However, “the market continues to exhibit tightness” as the build reported last week was below the five-year average of 84 Bcf — the fifth straight week that occurred.

“Since the beginning of injection season, cumulative builds are 19% below the five-year average,” the TPH team said. “The end of May typically represents trough demand for the gas market,” with heating-degree days gradually giving way to cooling demand, “putting power demand back in focus” this week.

Analysts are also focused on export demand. Following frigid conditions across Europe and parts of Asia this past winter, natural gas stocks are depleted across both continents and demand for U.S. LNG exports is strong.

ClearView Energy Partners LLC analysts said their models suggest the variable costs of shipping U.S. LNG to Asia and Europe could be below domestic prices on both continents for the remainder of 2021. “Thus, the window for U.S. LNG exports to Asia and Europe appears open to us” for several months, they said.

Spot gas prices advanced across the West as temperatures rose in the desert Southwest and the specter of drought began to pressure prices in California.

Demand for natural gas in California could quickly rise as temperatures climb and drought conditions threaten to cut into hydropower supplies, forcing a greater reliance on gas-fired power plants.

The TPH analysts said California may need to increase natural gas imports by up to 7% this summer to offset lower hydro output. “We expect West Coast natural gas pricing to catch a bid” upward as a result, the analysts said.

Looking ahead, NatGasWeather expects areas of showers and thunderstorms over parts of the Northwest and Midwest this week, with comfortable temperatures. Still, highs could reach the 80s over large swaths of the country and the 90s in both the Southeast and the Mid-Atlantic, the forecaster said Monday.

“A cooler trending system is expected to track across the far northern U.S. later in the week, with highs of 50s to 70s. “This will help shift the warm ridge over the Southeast to Texas and the Southwest with highs of 80s to 100s,” the firm said, for regional cooling demand in the Lone Star state and farther west.

Meanwhile, threats to production could loom sooner than normal this summer.

The National Hurricane Center (NHC) said over the weekend that it recorded the first named storm of the year in the Atlantic Ocean – well before the official June 1 onset of the hurricane season. The storm, Ana, transitioned from a subtropical storm to a tropical storm on Sunday, according to the NHC, though it was not expected to become a hurricane. The Climate Prediction Center of the National Oceanic and Atmospheric Administration last week said there was a 60% chance of an above-normal hurricane season this year.