Natural gas futures took a step back Wednesday, quickly erasing the gains mounted following the holiday weekend. With export demand remaining a threat and eyes on a plump storage injection, the June Nymex gas futures contract expired 7.1 cents lower at $1.722. July, which takes over the prompt-month position on Thursday, fell 5.9 cents to $1.886. 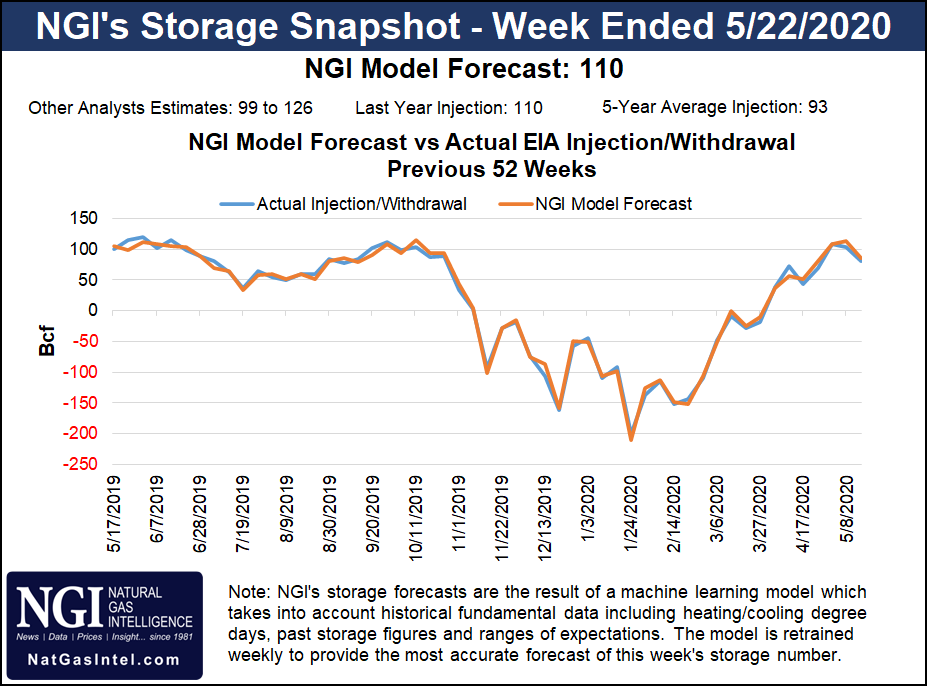 With expiration in sight, futures traders attempted to follow through on Tuesday’s strength, pushing the June Nymex contract to a $1.815 intraday high early Wednesday. The surge had several factors working in its favor.

Weather models continued to warm, with the overnight data being “a touch hotter” for the June 5-7 period across the southern United States due to upper high pressure strengthening, according to NatGasWeather. However, models still favor the upper ridge weakening June 8-11, and this is where the national pattern needs to be hotter, the firm said. “Again, the data isn’t quite as bearish as Friday’s data and needs close watching, as it wouldn’t take much hotter trends to look increasingly bullish.”

Meanwhile, Bespoke Weather Services said power burns were coming in stronger than expected as local economies across the country reopened amid the coronavirus pandemic.

However, the futures rally was short lived. On a macro level, some of the decline could be viewed as a sympathetic move in response to oil prices, which fell Wednesday amid renewed U.S./China tensions and some apprehension regarding Russia’s commitment to production cuts. Typical volatility ahead of contract expiration also could have had a hand in the decline.

On a more fundamental level, though, the pullback likely stemmed in part from expectations for the Energy Information Administration (EIA) to report another hefty injection in the next storage inventory report, scheduled for 10:30 a.m. ET Thursday.

Ahead of the report, a Bloomberg survey of three analysts produced a range of estimates from 99 Bcf to 126 Bcf, with a median of 103 Bcf. Reuters polled 16 analysts, who had the same range of estimates but arrived at a median of 106 Bcf. NGI projected a 110 Bcf build, which is on par with last year’s 110 Bcf injection but well above the five-year average build of 93 Bcf.

Last week, the EIA said inventories grew by 101 Bcf, boosting stocks to 2,503 Bcf, which is 779 Bcf higher than year-ago levels and 407 Bcf above the five-year average.

Ongoing concerns related to U.S. liquefied natural gas (LNG) exports also remain a massive headwind for pricing. Although NGI data shows that feed gas volumes for Wednesday were higher day/day, deliveries were still well off late-March highs at around 6.5 Bcf/d, and the outlook for summer remained rather bleak.

More than 30 U.S. LNG cargoes have been canceled for June, and international prices are signaling that oversupply conditions will linger for a while, even when accounting for any increased demand in the wake of Covid-19.

BTU Analytics LLC said in addition to the likelihood that U.S. cancellations would continue for the next several months, the low international prices also could potentially increase LNG imports in the near term. While spreads between international prices and Henry Hub may not move high enough to incentivize major international shippers such as Australia or Qatar to send cargoes to the Lower 48, they could convince shippers that are closer to take advantage of premium U.S. pricing, according to the firm.

In particular, the island nation of Trinidad and Tobago (T&T) appears well positioned to potentially take advantage of higher U.S. prices. Over the past two years, T&T has consistently exported 1.6 Bcf/d to countries around the world, BTU noted. The bulk of the exports, about 48% in 2019, go to Europe and Asia, while North America accounts for about 13% on average.

“These cargoes that have traditionally gone to Europe and Asia could instead make the shorter journey to the U.S., taking advantage of both higher gas pricing as well as lower shipping costs to increase netbacks,” said BTU analyst Connor McLean. “Alternatively, cargoes could also find their way to Mexico, backing out pipeline imports from the U.S. in the process.”

While LNG imports into the United States are not uncommon, a demand surge in the summer months “would be unexpected to say the least,” McLean said. The United States currently imports an average of 0.2 Bcf/d throughout the year, according to BTU, but those imports are heavily weighted to the winter months when the Northeast requires imports to meet peak winter heating demand.

“The summer months are typically much more barren, with three months last summer seeing no LNG imports at all,” McLean said. “In a potential scenario where only half of the previously identified Caribbean exports make their way to the United States, LNG imports would see levels generally seen during the peaks of winter.”

Meanwhile, RBN Energy LLC said progress for the so-called second wave of U.S. LNG export projects is at a near standstill. At this time last year, industry warnings of a global oversupply in the mid term were beginning to rise, but a “frenzy” of regulatory approvals and commercial activity suggested a slew of final investment decisions were “imminent and that 2019 would be a watershed year” for many projects.

“It’s safe to say that fervor (and the capital behind it) is dead,” said RBN analyst Sheetal Nasta. Momentum began to fizzle out in the latter half of 2019 as the global gas supply glut worsened, Nasta said, largely a result of project completions and growing exports from the United States and Australia. However, other factors including the U.S.-China trade war and high European storage levels exacerbated the situation.

“Any remaining optimism has since been squashed by the Covid crisis, which crushed global demand after lockdowns began in February 2020, and the oil price collapse, which has made oil-indexed LNG prices overseas much more competitive against U.S. LNG, almost all of which is priced off the Henry Hub gas benchmark price,” Nasta said.

Spot gas prices traded both sides of even on Wednesday as no major changes were expected in weather patterns for the next couple of days.

NatGasWeather said hot high pressure was forecast to continue across California and the Southwest, with near-record highs of 90s and 100s, and locally 110s in the Southwest deserts. However, the intense heat was expected to be countered by the rest of the country experiencing “mostly comfortable” highs in the 60s to 80s, including in Texas, the South and the Southeast, where weather systems were expected to stall with heavy showers and thunderstorms. A cooler-trending weather system was forecast across the Northeast late this weekend, although the forecaster said it’s too late in the season to expect much heating demand.

On the pricing front, Algonquin Citygate posted one of the only significant moves across the Lower 48 as the pipeline wrapped up pig runs, with next-day gas falling 13.5 cents day/day to $1.585. Prices throughout the rest of the Northeast swung within a nickel of the previous day.

On the pipeline front, Texas Eastern Transmission (Tetco) said as of Tuesday, it had restored partial service on Line 25, increasing capacity through Owingsville, KY, to 300 MMcf/d. Tetco expects to further increase capacity through Owingsville to 600-700 MMcf/d in the coming days once it completes initial flow testing following the explosion on its 30-inch diameter pipeline.

Price changes also were small across Appalachia and the Southeast, with a mix of gains and losses. Prices were mostly lower in Louisiana and Texas, although West Texas prices managed to tack on a few pennies day/day.

Tennessee Gas Pipeline on Thursday is scheduled to conduct a one-day pigging operation at its MLV 317-1 to MLV 313-1 location in Tioga, PA, disrupting flows nearby at Station 315. While this maintenance event is short lived, significant flow impacts were likely to materialize, according to Genscape Inc.

“Throughout the duration of this maintenance event, operational capacity is expected to be restricted to 1.34 Bcf/d, curtailing 486 MMcf/d of flows based on the prior seven-day flow average,” said Genscape analyst Preston Fussee-Durham.

The event comes after Tuesday’s completion of water wash maintenance at Station 315, which resulted in impacts of 191 MMcf/d from Sunday’s pre-maintenance flows. Thursday’s cleaning operation may further cut an additional 300 MMcf/d of gas flows out of the Appalachian Basin, Fussee-Durham said.

On the West Coast, modest price swings were seen throughout the Rockies and California, where the SoCal Border Avg. slipped 2.0 cents day/day to $1.810.