Natural gas futures pulled back in early trading Thursday as the market awaited the release of updated government inventory data, expected to show a build in line with historical norms. The June Nymex contract was down 17.3 cents to $7.467/MMBtu at around 8:50 a.m. ET. 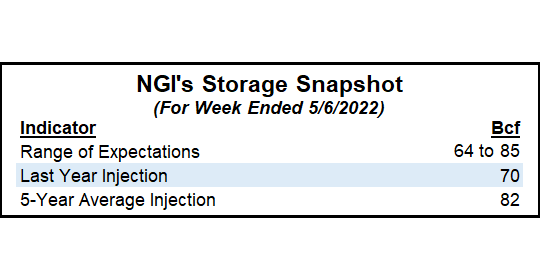 Surveys suggest the Energy Information Administration (EIA) will reveal a net injection in the high 70s or low 80s Bcf when it releases its latest weekly storage report at 10:30 a.m. ET.

Bloomberg’s survey spanned estimates of 64 Bcf to 85 Bcf, and landed at a median expectation for an injection of 81 Bcf. A Reuters poll produced a 78 Bcf median; predictions ranged from 68 Bcf to 85 Bcf for the upcoming report, which covers the week ended May 6.

“It was warmer than normal across the southern U.S., while slightly cool across the northern U.S.,” NatGasWeather said of temperatures during the latest EIA report period. The firm called for an 80 Bcf injection.

With the year-on-five-year-average deficit on track to hold near 300 Bcf into late May, the background state for the U.S. market is “relatively bullish,” NatGasWeather said. The deficit could then “increase further if a hotter than normal summer comes to fruition, as we expect.”

Looking at overnight trends in the weather outlook, NatGasWeather saw little change in demand expectations from the latest model runs. A mix of late-season heating degree days and early-season cooling degree days points to a “seasonal” pattern over the next two weeks, “typical of mid-May,” the firm said.

Among some of the other “key data points” heading into Friday’s session, Bespoke Weather Services noted estimates showing production easing back from recent highs.

This comes as “power burns have been quite strong recently, despite high wind generation and increased nuclear output,” Bespoke said. “This strong trend in burns is something that may be with us for a while, given the heat we have on the way, and expect to see as we move forward into the month of June.

“This supports our view that risks to prices are skewed more toward the upside, though today’s EIA storage report will have a say in what happens here in the near term.”