A mild start to the summer, combined with demand that continues to struggle amid the coronavirus pandemic, weighed down June natural gas bidweek prices. Although pockets of heat boosted prices in California, small losses were seen in most markets across the Lower 48, sending NGI’s June Bidweek National Avg. down 8.5 cents to $1.545/MMBtu. 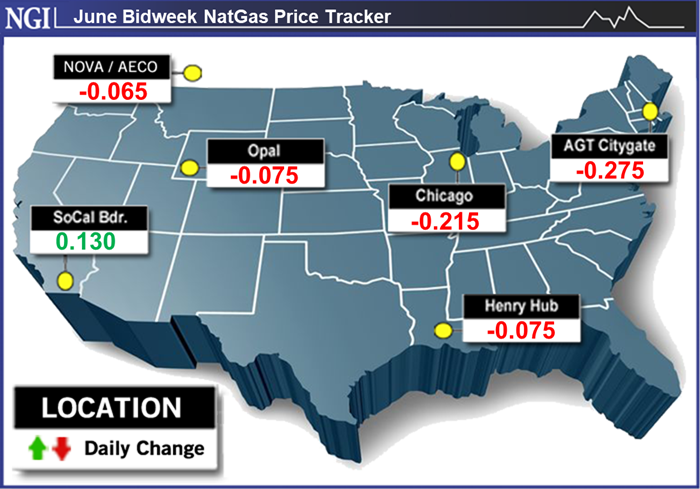 The June bidweek average is a sharp discount to year-ago levels, when the 2019 June bidweek National Average sat comfortably above $2.000 at $2.105. It’s also below the $1.722 settlement of the expiring June Nymex gas futures contract, which set the course for the Henry Hub bidweek prices to tumble 7.5 cents month/month to average $1.720.

In the days since the June contract rolled off the board, the July Nymex contract has mostly traded in the red as liquefied natural gas (LNG) demand — or the lack thereof — has cast a large shadow over a market that until earlier this year had benefited from substantial growth.

However, with Covid-19 exacerbating a supply glut that emerged following a mild winter, which left global inventories fuller than usual, international prices have sunk to record lows and resulted in a slew of domestic cargo cancellations. More than 30 cargoes reportedly have been canceled for June, and analysts expect to see large, double-digit cancellations through October.

The cancellations lessen the need for gas to liquefy, and the latest NGI data show that on Monday, feed gas deliveries tumbled more than 1.8 Bcf/d from Friday to around 4.3 Bcf/d. The bulk of that decline occurred at Cheniere Energy Inc.-owned terminals, where Genscape Inc.’s evening cycle data for June 1 gas flows show gas nominations down 592 MMcf/d at Corpus Christi LNG and down about 1.36 Bcf/d at Sabine Pass LNG.

“These precipitous declines come after an end-of-the-month head-fake as LNG feed gas deliveries rebounded sharply off of May 24 lows of 5.32 Bcf/d to weekly highs of just over 6.2 Bcf/d on May 26 and 28,” Genscape LNG analyst Allison Hurley said. “Alas, the great LNG pushback is upon us.”

Any gas not shipped overseas means more is stranded in the United States, which doesn’t bode well for storage inventories, analysts have noted. “This drop in feed gas flows, if it persists, could signal another major leg down in the market, since it could lead to a major further increase in the storage surplus versus last year and five-year average levels. Gas prices could drop to $1.50 or lower later this month,” said EBW Analytics Group.

Meanwhile, though not likely a major factor in the lower Henry Hub bidweek prices for June, the market is monitoring what could be the first named storm to hit the Gulf Coast this Atlantic hurricane season, which officially began Monday. A low pressure was centered over the southern Yucatan Peninsula and was expected to slowly drift into the southwest Gulf of Mexico through mid-week, possibly redeveloping into a tropical cyclone, according to the National Hurricane Center.

“There remains a good deal of uncertainty regarding where the impact would be, with anything from Texas to the Florida Panhandle on the table if something forms,” Bespoke Weather Services said.

The decline in June bidweek prices at Henry Hub is on par with most markets across the country, which generally fell up to 10.0 cents or so from May bidweek levels as weather forecasts thus far lack any significant widespread heat. The latest outlooks do show warmer weather and higher demand for this week, but then cooler weather beginning this weekend and into the second week of June.

This week’s heat is stronger in the West, where the National Weather Service showed parts of the region continuing to experience an “expansive dome of summer heat” that was forecast to spread into the northern Plains. High temperatures Monday were forecast to reach the 90s across the Northern/Central High Plains, with more triple-digit heat in the Desert Southwest.

“Following a cool Monday, the West Coast should see temperatures return to summer-like levels,” the NWS said. “The growing area of sweltering temperatures, along with relatively dry and gusty conditions, makes fire weather a growing concern, most notably in the Four Corners and Great Basin regions.”

The early summer heat in California sent June bidweek prices at SoCal Citygate up 13.5 cents month/month to $2.055. Smaller gains were seen farther north in the state, while Malin dropped 10.0 cents to $1.560.

Prices throughout the Rockies were mostly lower, though maintenance scheduled throughout June on El Paso Natural Gas and Transwestern Pipeline resulted in small gains of around a nickel on those systems. El Paso San Juan June bidweek prices climbed 6.0 cents month/month to $1.500.

Bidweek prices also were stronger in the Permian Basin, where the effects of a pullback in drilling activity were starting to reflect in associated gas production. Genscape Inc. noted that Permian gas output was down around 443 MMcf/d from last Tuesday through Thursday (May 26-28), leading an overall decline in production down to less than 86 Bcf/d.

Meanwhile, the decreases in gas production weren’t limited to the Permian. EQT Corp. began curtailing about 1 Bcf/d of Northeast Pennsylvania output last month and said the cuts could extend through June. Nevertheless, pricing throughout the East was weak, driven lower by mild weather demand and a still unfolding road to economic recovery amid the coronavirus.

Algonquin Citygate June bidweek prices plunged 27.5 cents month/month to average $1.340. Similar decreases were seen throughout the Northeast, while in Appalachia, most losses were limited to around 20.0 cents or so. Texas Eastern M-3, Receipt dropped a steeper 31.5 cents decline to $1.200.

The Energy Information Administration (EIA), in its latest Drilling Productivity Report, said gas production should decline in June in each of the seven major Lower 48 plays, with total production falling to 81.47 Bcf/d from 82.25 Bcf/d in May.

The outlook becomes less clear later this year, however, as the pullback in oil-focused drilling has resulted in a 13% drop in supply in so short a time that it raises concerns for the industry’s ability to recover, according to Powerhouse President Elaine Levin. This reflects, in part, the rapid decline curve associated with unconventional oil wells, Levin said. Replacing existing production requires developing new wells, but “drilling has not yet responded” as rig counts are making new lows.

Indeed, as of last Friday (May 29), the Baker Hughes Co. (BKR) rig count showed the overall domestic tally nearly 700 units behind the 984 rigs running at the same time last year. U.S. operators had now laid down nearly 500 rigs since mid-March, one of the many signs of the economic shocks delivered by the Covid-19 pandemic.

Among plays, the Permian shed another 14 rigs to drop to 148, a fraction of the 452 rigs active at this time last year, according to BKR. The Marcellus Shale and Williston Basin each dropped two rigs on the week, while the Arkoma Woodford and Utica Shale each added one, the firm said.

With West Texas Intermediate (WTI) crude oil prices back in the $30/bbl range, some producers already have indicated they would start to bring back wells back online, but the recovery may be a slow one. Rystad Energy said monthly output is unlikely to top 11.7 million b/d before 2022, a sharp detour from March, when production totaled 12.9 million b/d. Last November, U.S. production hit 12.885 million b/d.

“Next year will not be the year of salvation: despite a gradual output increase, monthly production is expected to only touch 11.7 million b/d at the end 2021,” according to Rystad’s base-case price scenario, which assumes an average $30 WTI price in 2020 and $39 in 2021.

On the gas side, Raymond James & Associates Inc. expects crude production to continue driving the gas supply bus for the foreseeable future. Given the firm’s crude production expectations, “we foresee a sizable decline in gas supply relative to our previous model in 2020/2021,” which is a decrease of 1.8 Bcf/d in 2020 and a decline of 0.5 Bcf/d in 2021. Furthermore, the Raymond James team said the market may be underestimating the degree to which domestic supply may decline in 2021 without a “substantial move in one or both of the U.S. oil or gas strips.”