With the news that a bit more natural gas than had been expected was injected into storage for the week ending April 22, traders pushed June futures lower on Thursday morning, perhaps in an effort to align the newly minted prompt month with where the May contract terminated on Wednesday. 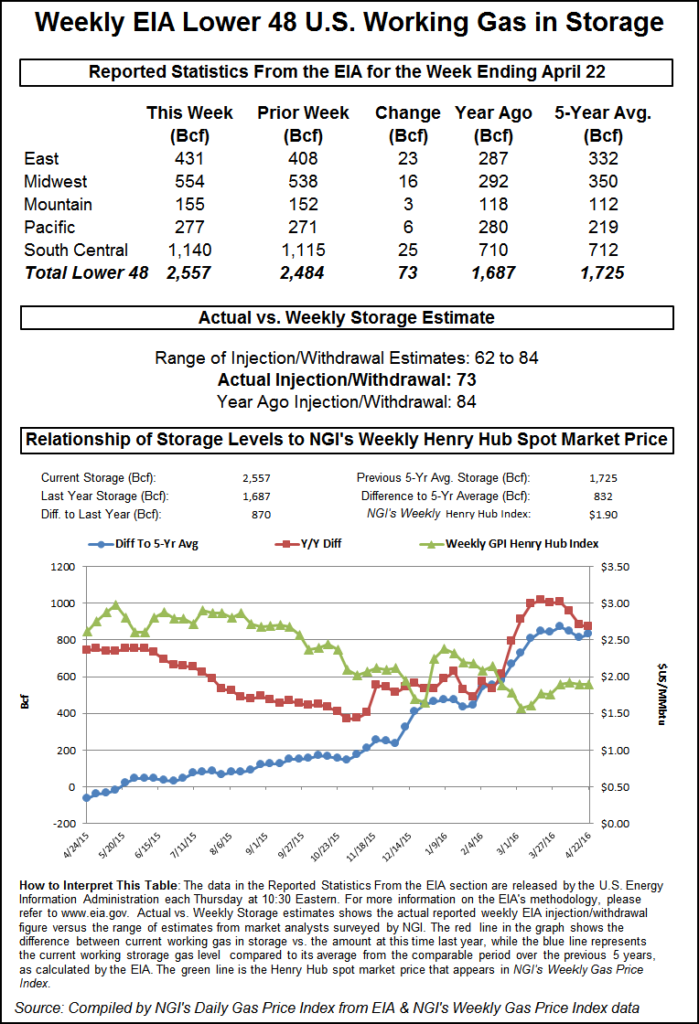 The Energy Information Administration (EIA) reported Thursday that 73 Bcf was injected into underground stores for the week ending April 22, which was a few more molecules than industry consensus expectations. Prior to the 10:30 a.m. EDT report, June futures were already at a discount to the contract’s $2.153 Wednesday close. In the minutes before the report, the contract was hovering at $2.095, and immediately after the release, June sunk to a session low of $2.075. After some back-and-forth, the prompt-month contract was trading at $2.088 as of 11 a.m., which was down 6.5 cents from the contract’s regular session close on Wednesday.

Before the report, many were expecting an inventory build to fall between last year’s 84 Bcf addition for the week and the five-year average of a 52 Bcf injection. Citi Futures Perspective analyst Tim Evans was on the record with an 81 Bcf injection expectation, while a Reuters survey of 22 industry experts produced a 62 Bcf to 84 Bcf build range with a consensus estimate of a 70 Bcf injection.

The weak winter, which left robust storage inventories, has some analysts concerned that the U.S. storage capacity limit could be tested this refill season. However, others are not so sure. Some market-watchers took Thursday’s deficit to last year’s build for the week as a sign that the storage situation could be undergoing some corrective action.

“We believe the storage report will be viewed as neutral,” said Randy Ollenberger, an analyst with BMO Nesbitt Burns Inc. “Storage remains at record levels but the level of injections is well below last year and points to a rebalancing over the course of the summer. We believe that U.S. working gas in storage could exit the summer season at five-year lows, assuming normal weather.”

While the 73 Bcf build was smaller than last year’s 84 Bcf build, the margin was significantly slimmer than the prior week, where 7 Bcf was injected for the week ending April 15, compared to 82 Bcf in the previous year’s week.

As of April 22, working gas in storage stood at 2,557 Bcf, according to EIA estimates. Stocks are now 870 Bcf higher than last year at this time and 832 Bcf above the five-year average of 1,725 Bcf. For the week, The South Central Region injected 25 Bcf and the East Region injected 23 Bcf, while the Midwest deposited 16 Bcf. The Pacific and Mountain regions each chipped in 6 Bcf and 3 Bcf, respectively.