What a difference a few days can make. 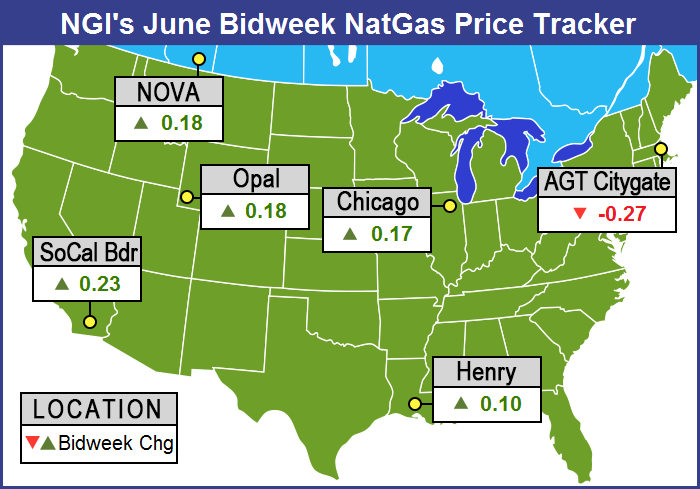 June natural gas futures came off the board before the Memorial Day weekend at $3.236, helping to lift NGI‘s June National Bidweek Average 10 cents to $2.99/MMBtu. The gains came after the May bidweek average eased 3 cents, holding on to most of the gains from a 49-cent surge in April.

But that was then and this is now.

July’s first two and a half days as the prompt month were a blood bath. For a market looking to transition out of the shoulder season heading into June, summer weather failed to show up as expected. Bearish storage injection figures for the last report week of May piled on to drive July natural gas from a $3.20 support level to knocking on a $3 floor to start the new month.

A larger-than-expected storage report appeared even larger thanks to a reclassification from working gas to base gas.

The Energy Information Administration (EIA) reported that 81 Bcf was injected into underground stores for the week ending May 26, but the reclassification pushed the implied flow for the week to 85 Bcf, a double dose of bearish news.

In the minutes leading up to the 10:30 a.m. EDT release of inventory data on Thursday, the July contract was hovering around $3.070, which is near where it finished Wednesday’s regular session. In the minutes that immediately followed the report, the prompt-month contract plunged and notched a $2.994 low just before 11 a.m. EDT as the 81 Bcf injection, as well as the implied 85 Bcf build, were both bearish compared to industry expectations.

But EIA’s figures only confirmed what the bears — which had seized control of the market even before the report’s release — already knew.

“We had a major break on both the spot month price and the winter month strips a couple days back,” Powerhouse’s David Thompson, executive vice president of the Washington, DC-based energy brokerage firm, told NGI. “We first had some weakness show up on May 23. We held for a couple days, and then Tuesday we really ripped lower and took out some critical support levels.”

The lack of speculators coming in to buy the dips this week “tells me that the bears are firmly in control of the market at the current time.”

Speaking before the release of Thursday’s storage numbers, Thompson said he expected the market to test support at $2.98-3.02, with continued cooler-than-expected weather potentially pushing down to a lower support zone of $2.88-2.90.

The weather outlook heading into June just wasn’t what speculators were expecting, according to Tom Saal, vice president of FCStone Latin America LLC in Miami. The prices haven’t been what the longs were expecting this week, and they’ve been getting out, he said.

“You were in a shoulder period, now you’re kind of transitioning into a higher demand period. Warmer weather is coming, and the market is anticipating that,” Saal told NGI. “The market’s falling because the weather appears to be lackluster.”

The shift in market sentiment stands in sharp contrast to the broad bidweek gains across much of the country. With the exception of a 10-cent drop in the Northeast for June, most regional averages climbed 10-20 cents, reflecting the expectations for a transition into the summer cooling season that helped push Henry Hub to $3.24/MMBtu.

Points across Texas enjoyed notable gains, especially in West Texas, no doubt helped by prospects for continued demand growth from Permian Basin exports to Mexico. Mexico’s recent announcement that it’s planning a July 1 launch of its pipeline capacity reservation contract model has spurred optimism. Meanwhile, Energy Transfer Partners LP announced in early May that its Trans-Pecos and Comanche Trail pipelines — both designed to bring natural gas from West Texas to the Mexican border — are officially in service.

Waha gained 19 cents for June bidweek to reach $2.81, gaining some ground on Henry Hub and offering welcome news for those concerned about infrastructure constraints out of the fast-growing Permian Basin. El Paso Permian added 22 cents for June to finish at $2.79. Other parts of Texas enjoyed a bump as well. Houston Ship Channel added 22 cents to finish bidweek trading at $3.33, while Texas Eastern South TX climbed 13 cents to $3.22.

“I think the Mexican market has shown a lot of resilience and that demand continues to grow,” FC Stone’s Saal said. Demand from Mexico, and from liquefied natural gas (LNG) exports, could help support the market and keep it above $3, but they likely won’t be enough to push prices higher this summer without some weather support, he said.

“It looks like the weak 2016/2017 winter might have had a greater impact on prices if it hadn’t been for exports picking up the slack,” NGI Markets Analyst Nathan Harrison said. “Peak winter U.S. consumption was below 93 Bcf/d, but exports to Canada and Mexico pushed North American demand above 100 Bcf/d, putting it more on par with previous winters. We’ll probably see more impact of exports this summer as we become more of a storage field for Mexico power generation.”

In the Northeast, a number of New England points dropped sharply for June. Algonquin Citygate, coming off a stretch of flow-restricting maintenance events in May, gave up 27 cents and switched from a positive to negative basis, finishing at $3.10 for June. Tennessee Zone 6 200 L fell 24 cents to $3.09. Further south, Transco Zone 6 NY added 8 cents to finish at $2.89.

In Appalachia, a May 10 Federal Energy Regulatory Commission order to halt new horizontal directional drilling on the 3.25 Bcf/d east-to-west Rover Pipeline has created concerns that a major source of new Appalachian takeaway capacity will come online later than expected. The project’s Phase 1 will see a partial delay after the setback, backer Energy Transfer recently revealed.

Finishing at $2.69, Dominion South added 10 cents in June and managed to hold its ground against Henry Hub, trading at an average negative basis of 55 cents, with basis as wide as minus 70 cents.