Natural gas futures extended their rally as a hotter long-range forecast, a dip in production and bullish technical momentum lifted the prompt month ahead of expiration. The July Nymex contract rolled off the board at $6.551/MMBtu, up 5.0 cents on the day. The August contract, which moves to the front of the Nymex curve on Wednesday, settled 2.4 cents higher at $6.570. 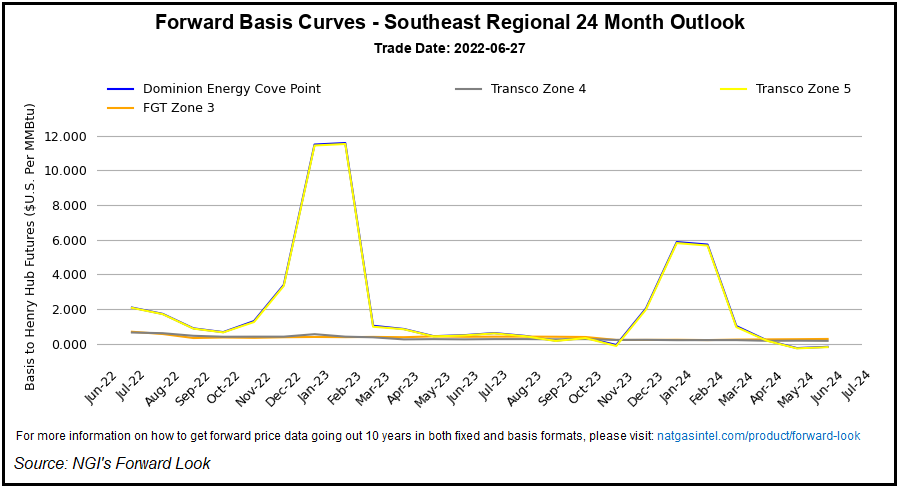 Fresh off a 28.1-cent jump for futures on Monday, bulls were eager to keep the momentum going at the start of Tuesday’s session. Fundamentals lent a hand in boosting the July 2022 contract on its final day on the Nymex strip. The prompt month surged to a $6.765 intraday high before a sell-off in the last half hour of trading.

Weather data remained supportive by trending hotter for the July 1-12 period, according to NatGasWeather. The forecaster said a strong upper high pressure is expected to rule most of the Lower 48, with daytime temperatures reaching the upper 80s to 100s for strong national demand. Although the midday model run gave back a small amount of projected demand, the pattern still leaned bullish overall.

Meanwhile, the National Hurricane Center (NHC) was monitoring a tropical disturbance in the northern Gulf of Mexico (GOM). As of Tuesday afternoon, the system had a 40% chance of cyclone formation in the next 48 hours as it remained unorganized. However, some additional development is possible as it moves slowly westward or west-southwestward and approaches the Texas coast in the next two days.

“Regardless of development, heavy rain will be possible among portions of the Texas coast later this week,” NHC forecasters said.

Price Futures Group analyst Phil Flynn said with gas supplies still below normal and refining capacity extremely tight, it’s critical that the tropical storm activity brewing in the GOM doesn’t do any damage to either the production side or the refining side.

Production data also aided in Tuesday’s rally along the Nymex futures curve. Top-day data pointed to a more than 1 Bcf day/day decline in output. Although the data was likely to be revised higher – especially in light of recent highs – another dip may materialize in the days ahead as the calendar flips to July. Production estimates often fluctuate wildly at the start of a new month.

That said, production growth of “significant magnitude” is seemingly inevitable, according to Mobius Risk Group. With recession risks still in play, and a “steady drumbeat” of reducing reliance on fossil fuels, a legitimate argument could be made that from a purely economic standpoint, the Nymex curve does not need to be as “rich” as it is now, Mobius said

“However, such a narrative is dangerously short sighted on several fronts,” according to the firm.

First, pure economic decision making is “out the window” when it comes to production as labor, material and timing challenges remain, according to Mobius. Second, a collapse in longer-dated contracts could potentially bring natural gas back to being a cheap fuel relative to coal. As a result, natural gas could see year/year growth in the power stack. Finally, and most important, there is the ever-present weather risk in a market that can see available inventory diminish rapidly without readily available fuel switching alternatives.

“One can never know what Mother Nature will offer up, but $30-plus pricing in downstream liquefied natural gas markets and steep backwardation on the home front seem to suggest global gas markets are not yet ready to bet against this wildcard,” Mobius analysts said.

The Mobius team said it’s also important to keep in mind that the gas market is in anything but a purely economic world at present. “Refining capacity is not maxed out, yet crack spreads are at record highs. Europe is only now beginning to consider adding a significant amount of coal back into their energy mix, and supply chain issues have become as accepted as the rising and setting of the sun.”

That said, gas prices look like they may have bottomed, Flynn said. “We are getting closer to the point where Freeport will reopen. The Freeport export terminal really put a damper on the natural gas rally.”

Even without Freeport taking in 2 Bcf/d of gas as repairs and investigation into an early June explosion continue, storage inventories have a steep uphill climb to return to historical levels that are adequate for the upcoming winter. The Energy Information Administration said stocks as of June 17, which had risen by a larger-than-expected 74 Bcf that week, were still 331 Bcf below the five-year average at 2,169 Bcf.

“To our view, if weather patterns remain hotter than normal most days in July and August, as we expect, the damage inflicted from the Freeport outage will be minimized for now,” NatGasWeather said.

With heat’s return quickly approaching, spot gas prices continued to firm on Tuesday. Gains were more significant as several locations crossed back above the $7 mark.

Henry Hub cash moved up 48.0 cents to average $6.545 for Wednesday’s gas day. Gains there were in line with the rest of the region as Gulf South Pipeline Co. was scheduled to perform a meter restoration Wednesday at its Henry Hub interconnect delivery with Sabine Pipe Line. Operational capacity at Henry Hub (Sabine) would only be 168,300 MMBtu/d, resulting in a cut of 165,220 MMBtu/d based on Tuesday’s timely cycle nomination of 333,520 MMBtu/d.

Prices across the Midwest and Midcontinent picked up anywhere from 35 cents to as much as 63.5 cents on rising temperatures in the region. Highs could approach the century mark in the coming days before a cool front is set to arrive by the weekend.