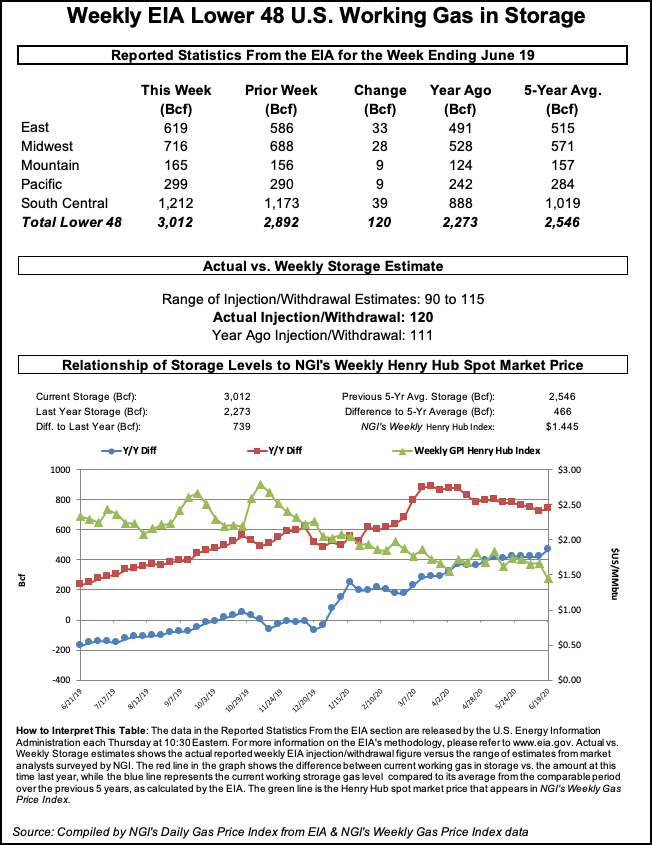 The U.S. Energy Information Administration (EIA) reported an injection of 120 Bcf for the week ending June 19. The build lifted inventories to 3,012 Bcf, well in excess of the year-earlier level of 2,273 Bcf and the five-year average of 2,546 Bcf. A week earlier, EIA reported a 93 Bcf injection.

“As bearish as things have been for a while in the natural gas market, today went to another level,” Bespoke Weather Services said Thursday. “No doubt, the supply/demand balance reflected by this number is disastrous,” referring to the injection figure. “If extrapolated forward, it would greatly increase the risk of containment this fall.”

The robust injection deepened balance concerns at a time when supply could be further supported by a return of associated gas production as oil drillers resume activity, and when the demand side needs either exceptional summer heat or a sustained recovery in liquefied natural gas (LNG) exports. Bloomberg data show that U.S. crude oil production reached 11.0 million b/d on June 19, up nearly 5% from the 2020 lows reached earlier this month.

Summer heat has intensified in June and forecasts call for continued high temperatures across most of the Lower 48 next month. However, it may not envelop all of the country, leaving analysts unenthusiastic.

Forecasts “signal for the strongest heat coming as we head into the 11- to 15-day time frame, with a classic La Niña look to the pattern,” Bespoke said. “This easily keeps total demand above normal over the next two to three weeks,” with the greatest heat relative to norms in the Midwest and Northeast. The South holds closer to normal, “which does limit the bullishness of the pattern.”

Bespoke noted that recent balance data were headed in the right direction, but there is little conviction this will remain the case. As of Thursday morning, production was down about 1.5 bcf this week, while LNG export levels were up and hovered above 4.0 Bcf/d.

LNG demand, however, remains well below pre-coronavirus levels and in a precarious situation, amid a pandemic that shows few signs of abating, restraining both economic activity and energy consumption. The United States on Wednesday reported a daily record number of virus cases — more than 45,500, according to Johns Hopkins University — and the World Health Organization posted its single-day peak last Sunday of about 183,000.

Against that backdrop, demand from Europe and Asia remains anemic. China’s economy has recovered more quickly than others, and the country had in the spring emerged as a promising LNG destination. New virus outbreaks, however, may choke off any new demand.

The Desk’s John Sodergreen, writing on the company’s online energy platform Enelyst, noted that only two U.S. LNG ships departed for China in June after 10 made the voyage in April and May.

The “elephant in the room,” Sodergreen said, is “renewed fears over a second wave of this awful pandemic.”

Analysts with Tudor, Pickering, Holt & Co. (TPH) said Thursday the month ahead does not look favorable for exports.

“Industry scuttlebutt pegged June cargo cancellations in the 30-35 range, with July weaker at a speculated 40-45 cancellations,” the TPH team said, citing press reports this week. “We’re currently modeling 3.7 Bcf/d of feed gas demand for July, down from a June average of 4.0 Bcf/d, and we don’t expect a meaningful recovery until September.”

Goldman Sachs Commodities Research analysts, noting that demand from Europe also looks dubious in the near term, estimated that LNG export cancellations will add more than 760 Bcf to U.S. gas storage by the end of summer.

“This is effectively the last shoe to drop in a global gas rebalancing process that started with Asia pricing its LNG lower to push excess cargoes towards Europe, followed by Europe sorting its resulting gas market overhang out by pricing high-cost gas supply — U.S. LNG — out of the market,” the Goldman analysts wrote in a note to clients.

Spot prices declined across the country on Thursday, despite ongoing expectations for intensifying summer heat and greater cooling demand.

“The onus is squarely on hot weather patterns coming through this summer, and every time it doesn’t, it could lead to disappointment, especially due to hefty surpluses,” the firm added. “Make no mistake, the first week of July pattern is a very warm one with highs of 90s and 100s over the Southwest, central U.S., and 90s at times over the Midwest, South, and Southeast.” But markets “are suggesting it needs to be further hotter.”

In pipeline news, Columbia Gas Transmission said it is performing planned pigging on Line LEX, spanning from West Virginia into Ohio. Genscape estimated that restrictions in place for Friday and June 30, when the work is slated for completion, could limit up to 353 MMcf/d of receipts and 605 MMcf/d of westbound flow.

Separately, the Federal Energy Regulatory Commission on Wednesday authorized the Cheyenne Connector and Cheyenne Hub projects to begin operating. Genscape said initial flow is expected Friday. Genscape estimated the projects will add 600 MMcf/d of incremental throughput from the Denver-Julesburg Basin up to and via the Rockies Express Pipeline to various demand markets.