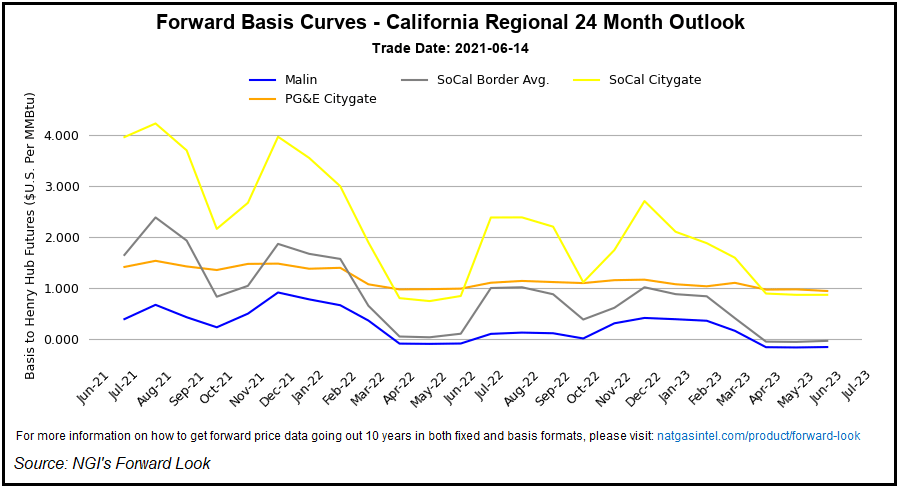 After a steady climb over the previous five trading sessions, however, futures pushed up against technical resistance near $3.40 and, absent a new catalyst yet this week, this triggered selling, he said.

“Technically, the market just failed to break out of the high end of its recent range,” Saal told NGI.

There were several competing factors in play Tuesday.

Liquefied natural gas (LNG) levels, which hovered near record levels above 11 Bcf most of the spring, have proven choppy in June amid annual maintenance work at export facilities. That has continued this week.

After dropping below 10 Bcf all of last week, LNG feed gas volumes climbed back above that threshold on Monday, reigniting expectations that export strength will resume this summer. U.S. export destinations in Asia and Europe are short on gas supplies and are expected to boost demand as summer temperatures spur seasonal cooling needs.

However, LNG volumes fell back below 10 Bcf on Tuesday, according to NGI data. At the same time, the National Hurricane Center (NHC) said it was tracking a weather system causing disorganized showers and thunderstorms over the Bay of Campeche in southern Mexico that could affect LNG shipping.

The weather system was not expected to move substantially before Thursday, but it could push northward at that time, with a tropical depression likely to form late in the week. The system could then move across the central Gulf of Mexico, the NHC said, bringing heavy rains.

The tropical storm could cause LNG cargo delays, adding to maintenance interruptions, NatGasWeather said. The system may dampen cooling demand later this week in states along the Gulf Coast as well.

“The system could also bring minor production disruptions in the Gulf of Mexico, but overall it’s more likely to bring stronger bearish impacts versus bullish” in terms of natural gas prices, the firm added. “Impacts are likely to be the loss of demand from clouds and showers, as well as the potential to delay LNG cargoes and bring heavy squalls to LNG facilities.”

Separately, markets continued to mull potentially prolonged restrictions on the Texas Eastern Transmission Co. (Tetco) system that could last for months. Tetco said a 20% pressure reduction that began this month on part of its 30-inch diameter system could last until late in the third quarter.

Additionally, ahead of the trading week’s start, Pacific Gas and Electric Co. (PG&E) said it reclassified 51 Bcf from working gas to cushion gas, effectively removing that amount from the available inventory. The adjustment will affect the storage inventory level PG&E reports to the U.S. Energy Information Administration (EIA) beginning with the week ending Friday (June 18).

Looking to the next EIA storage report on Thursday, covering the week ended June 11, analysts are expecting a relatively modest increase.

Energy Aspects issued a preliminary estimate for a 61 Bcf injection. “Gas in power ratcheted up by more than 9 Bcf/d” during the report week, Energy Aspects said. “This early cooling season heat saw daily burn hit around 39 Bcf/d for two days” during the period. “That demand strength was more than sufficient to offset production of above 92 Bcf/d and weak LNG feed gas demand from maintenance.”

NGI forecast a build of 74 Bcf for the week. Last year EIA reported an increase of 86 Bcf, while the five-year average is 87 Bcf.

On the weather front, meanwhile, forecasts continue to point to solid summer demand. The American and European models added a few cooling degree days for this weekend but lowered cooling demand expectations for late next week, NatGasWeather said.

“No major changes as national demand will be near normal this week due to weather systems bringing comfortable highs of 60s to low 80s to the Great Lakes, Northeast, and Mid-Atlantic, countering record setting heat across California and the interior West as strong upper high pressure brings dangerous highs of mid-90s to 120,” the firm said.

National demand is expected to increase June 26-29 “as upper high pressure over the southern U.S. expands a little further north and eastward to keep this important period just hot enough to satisfy.”

Next-day cash prices lost momentum as well on Tuesday, as hubs in the West gave back some of the whopping gains posted a day earlier.

Upward price pressure could soon resume. An estimated 85% of California is currently grappling with severe drought or worse, according to state estimates. When heat and persistently dry conditions converge, air conditioning demand tends to surge, pressuring gas supplies at times when hydropower’s share of the state’s electricity generation necessarily declines because of water shortages.

Additionally, scorching high pressure over the Mountain West, Texas and Plains will bring highs of 90s to low 100s this week, in addition to highs of 110 to 120 in the deserts of the Southwest and California, National Weather Service forecasts showed.

Aside from western markets, cash prices were mixed Tuesday. A few hubs in the Rocky Mountains and Midwest posted gains.

On the maintenance front, Equitrans Pipeline said it planned pigging runs on Wednesday (June 16) that could limit receipts in Wetzel County, WV, according to Wood Mackenzie. 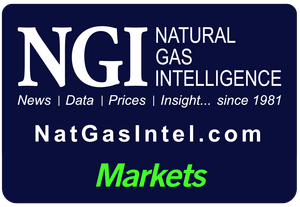