The U.S. Energy Information Administration (EIA) on Thursday reported an injection of 16 Bcf into natural gas storage for the week ended June 11. Natural gas futures dived lower after the report. 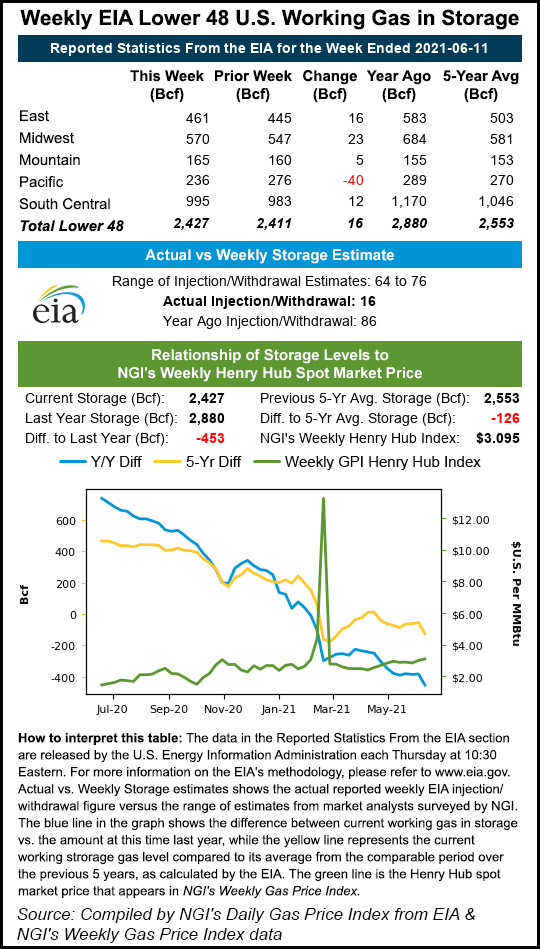 The result was skewed by a one-time adjustment in the Pacific that resulted in a steep decrease in working gas stocks in that region. EIA announced an implied build of 67 Bcf for the week, a few below median estimates. However, the large reclassification in the West made the actual storage change only 16 Bcf.

Pacific Gas and Electric Co. (PG&E) said it reclassified 51 Bcf from working gas to cushion gas, effectively removing that amount from the available inventory. PG&E initially reported that the change would take effect with next week’s storage report, but EIA pushed up the timeline. The PG&E adjustment reflected a change in the company’s accounting methodology.

Analysts on The Desk’s online energy platform Enelyst said the magnitude and accelerated timing of the adjustment likely caused some traders to pause to digest the change. It marked the largest reclassification in any one region to date.

“The scale of this is preposterous,” said one participant on The Desk.

Prior to the report, a Bloomberg survey showed a median estimate for a 70 Bcf injection for the latest week. Responses ranged from 65 Bcf up to 76 Bcf. A Reuters poll of analysts, whose estimates ranged from a build of 64 Bcf to 76 Bcf, landed at a median injection of 73 bcf.

NGI’s model predicted a 74 Bcf injection. Last year EIA recorded an 86 Bcf build for the similar week, and the five-year average is an injection of 87 Bcf.

Temperatures during the EIA report week were “very warm/hot versus normal over most of the U.S. besides the cool and showery West Coast,” NatGasWeather said. The firm said the relatively light build on an implied basis reflected robust cooling demand during the covered week.

The Midwest injection of 23 Bcf led the way, followed by the East’s 16 Bcf increase.

The South Central posted a build of 12 Bcf. This reflected a 15 Bcf injection into nonsalt facilities and a withdrawal of 3 Bcf from salts. Mountain stocks increased by 5 Bcf.

Pacific region stocks, meanwhile, fell by 40 Bcf, reflecting the PG&E reclassification. The change equaled the implied flow of 11 Bcf minus the 51 Bcf adjustment.

Looking ahead to next week, early estimates call for a similarly modest build that reflects the intense heat – and steady cooling demand – that is permeating most of the western United States in June.

Bespoke Weather Services, for one, estimated a 72 Bcf injection for the week ended June 18; the five-year average is 83 Bcf. “We remain on pace for a high-end hot June overall, ranking in the top five hottest in the historical record,” the firm said.