Dragged lower after a bearish government inventory report, natural gas futures plunged on Thursday after rallying more than 7.0 cents into the expiration of the June contract a day earlier. 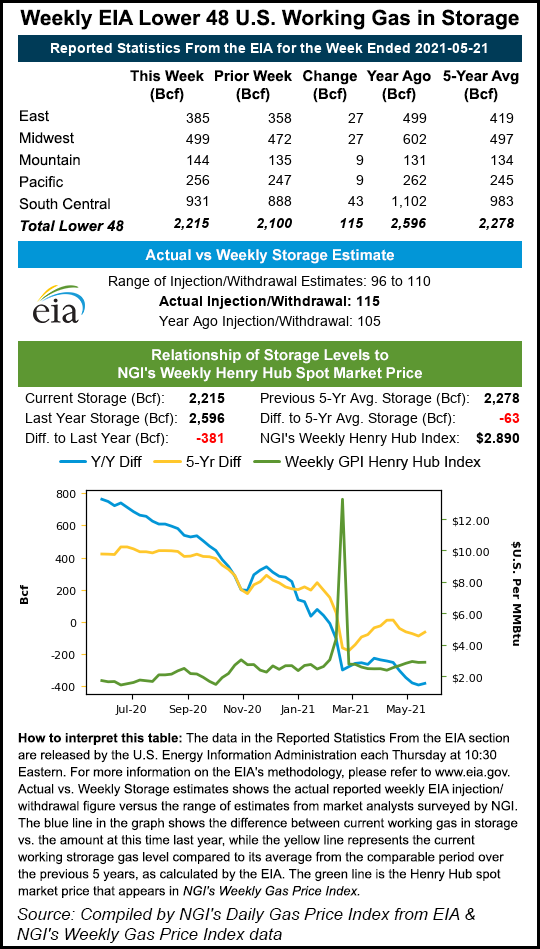 The July Nymex contract, in its debut as the front month, dropped 6.9 cents day/day and settled at $2.958/MMBtu. It had closed above $3.00 on Wednesday.

NGI’s Spot Gas National Avg. shed 6.0 cents to $2.640 as temperatures cooled in the Upper Midwest and forecasts called for light demand this coming weekend. Trading on Thursday was for gas delivered Friday through Monday, May 31. Natural gas trading on Friday will be for June gas delivery on Tuesday June 1.

Futures traders pulled back after a disappointing U.S. Energy Information Administration (EIA) storage result that eclipsed the high end of analysts’ projections and signaled weaker demand than most had in their models.

EIA reported an injection of 115 Bcf natural gas into stockpiles for the week ended May 21.

Temperatures during the storage report week were cooler than normal over the southern United States and along the Mid-Atlantic Coast but warmer than normal – and generally comfortable — over the Mountain West and northern portions of the country. The weather minimized demand in key regions, according to NatGasWeather.

Still, cooling demand had emerged in the West, and analysts anticipated a lighter build than what EIA delivered. Prior to the report, a Bloomberg poll showed a median estimate of 106 Bcf while a Reuters survey landed at a median build of 106 Bcf. A Wall Street Journal survey found an average build expectation of 101 Bcf. NGI’s model called for a 107 Bcf injection.

The estimates compare with a 105 Bcf increase in storage a year earlier and a five-year average injection of 91 Bcf.

“We expect a volatile close to the week as major players position for the long Memorial Day Holiday,” NatGasWeather said.

The build for the May 21 week lifted inventories to 2,215 Bcf. That compared with the year-earlier level of 2,596 Bcf and the five-year average of 2,278 Bcf. But the increase for last week nevertheless signaled some easing in demand.

The storage result pointed to a “notable loosening in supply/demand balances, and this has already brought the new prompt-month July contract right back to the middle of the long-running $2.90 to $3.00 prompt month trading range,” Bespoke Weather Services said. “Given some heat in the forecast, that may keep support at the bottom of this range, but the balance makes it tougher to rationalize breaking above $3.00 for a while.”

The South Central accounted for a big chunk of the inventory increase. The region reported a build of 43 Bcf that included a 27 Bcf injection into nonsalt facilities and an increase of 16 Bcf into salts. The Midwest and East regions followed, with both reporting builds of 27 Bcf, according to EIA. Mountain and Pacific region stocks each increased by 9 Bcf.

On a bright note, analysts expect LNG and weather demand to both bounce back this summer.

After essentially trading sideways the two previous days, next-day cash prices dipped lower on Thursday, led by declines in the Midwest and Northeast.

In the Midwest, where several markets saw highs in the 50s – including Chicago – prices declined across the region.

NatGasWeather noted that a late-season cool shot brought thunderstorms and chilly winds to the Midwest Thursday. It was expected to track across the Great Lakes and Northeast Friday through Sunday for “light heating needs.”

That noted, the firm said, the recent hot ridge over the Southeast is projected to shift over Texas and the Southwest in the next few days, resulting in highs of 80s to 100s, for a mixed weather outlook to start next week.

“There’s still plenty of weather to play out before hotter temperatures arrive around June 6-7,” NatGasWeather said.

Maxar’s Weather Desk’s Brad Harvey, a senior meteorologist, said by late next week “most areas turn warmer,” ushering in more consistent summer demand. “Above- and much-above-normal temperatures are along the West Coast and in the Northern Rockies, while aboves return to the Midwest and East.”

Harvey’s firm also noted that, while maintenance work is expected to lessen, the threat of hurricanes picks up notably in June. The Maxar forecast is for 17 named storms, including eight hurricanes. Such storms often interrupt production, adding at least temporary upward pressure to spot prices.