Bidweek came at an opportune time for market bulls as weather forecasts showing warmer-than-normal weather across much of the country for the first half of the month lifted July bidweek prices, with especially stout increases seen in southern California, the Pacific Northwest and the Northeast. 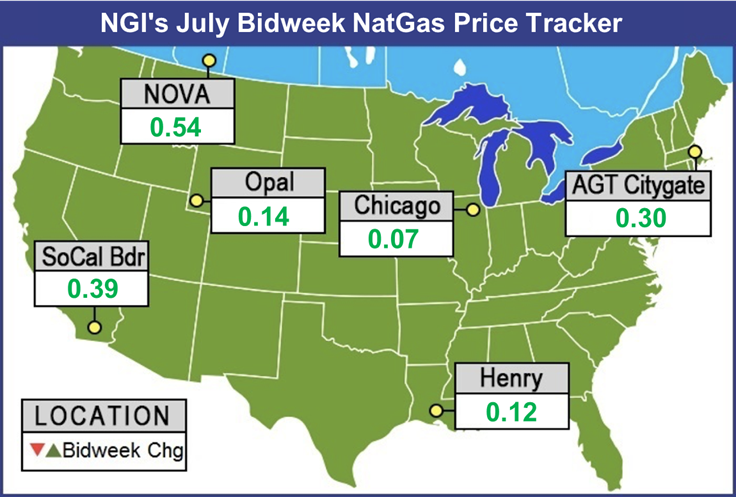 The NGI July National Bidweek Average jumped 16 cents from June Bidweek to $2.64, which represents a 9-cent discount to the July 2017 Bidweek Average.

Current weather forecasts are quite bullish, according to Bespoke Weather Services, and the forecaster expects a consistent string of 15 straight days of above-average gas-weighted degree days through the middle of July. Weather models, however, have likely already picked up on the extent and intensity of heat through the medium range, and if anything, cool risks should continue to increase through the long range. Atmospheric indicators and climate guidance both show a pattern with significantly less cooling demand by later week 3, which models may reflect soon as well.

“The result is that through mid-July, we would expect to still see cooling demand above average but would similarly expect to gradually transition to a pattern with less intense heat (to normal) than we are seeing over the next week and a half,” Bespoke said.

The weather forecaster cautioned, however, that there remains a “solid amount of uncertainty” in the forecast as weather models have yet to converge on where any late-month heat will be situated. In addition, models should show increasing atmospheric response to forming Nino conditions. As such, risk is skewed for weather models to begin cooling this weekend.

“Additionally, though heat looks to be rather impressive, it should linger below record levels, especially with heat focused far more across the Midwest and Northeast than the South,” Bespoke chief meteorologist Jacob Meisel said. Into week 3, Bespoke would still look for heat to gradually get eroded across the country as cooler risks rise through July, “though we note cooler risks may be slower to enter through week 3 than previously expected.”

The less intense heat over the South is welcome news for the Electric Reliability Council of Texas. Abnormally hot stretches of weather in May and June have already set new monthly demand records for the electric grid operator, and it estimates a reserve margin of just 11% for the summer, which is lower than previous years and its 13.75% reference reserve margin. The lower anticipated reserve margin is mainly a result of three large coal plants retiring in early 2018 and forecasts of record-breaking summer electricity demand.

ERCOT’s final seasonal assessment of the anticipated reserve margin for the summer increased to 11% from earlier projections of 9.3% after a new generator moved up its online date, a mothballed generator became available and a switchable generator that can choose to connect to either ERCOT or Southwest Power Pool became available to ERCOT.

Still, the grid operator is again predicting record-breaking summer electricity demand, as it has for the past two summers, with a peak load forecast of 72,756 megawatts (MW) based on normal weather conditions. This forecast is more than 1,600 MW higher than the current all-time peak of 71,110 MW set in August 2016. While May 2018 was one of the hottest Mays on record for Texas, leading to a new May demand record that was more than 8,000 MW higher than the previous May record, the June-August summer period is only expected to be slightly hotter than normal.

In a bit of good news for the overall Gulf Coast, Colorado State University (CSU) on Monday updated its outlook for the 2018 Atlantic Hurricane Season. CSU is now calling for a below-average season with 11 named storms, four hurricanes and one major hurricane. CSU weather forecasters attributed the reduction to anomalous cooling in the tropical Atlantic, as well as the possible formation of an El Nino.

July bidweek prices across Texas were mixed, with small declines seen at the Houston Ship Channel, which slipped 2 cents to $3.01, and at the Katy Hub, which fell 6 cents to $2.99. At Carthage, however, bidweek prices were up 12 cents to $2.84, and similar gains were seen across South Texas.

In West Texas/southeast New Mexico, prices posted substantial declines as maintenance continued in the region throughout bidweek, limiting flows out of the Permian Basin and creating uncertainty about whether limitations would extend into July. El Paso-Permian dropped 15 cents to $1.74, and Waha plunged 21 cents to $1.76.

During the June 30-July 1 weekend, however, the force majeure event on El Paso Natural Gas’ (EPNG) Line 1100, between the Guadalupe and Cornudas compressor stations, was lifted effective Intraday 3 cycle on July 1. The force majeure was originally declared on June 18 due to pipeline anomalies.

The operational capacity at the “GUADLUP” constraint point has consequently been increased to 1,154,000 Dth/d (roughly 1,126 MMcf/d), according to Genscape Inc. As of evening cycle for the July 2 gas day, scheduled capacity through the constraint was at around 952 MMcf/d. “This rebound in scheduled flows is right in line with scheduled capacities seen prior to the force majeure declaration; only 11 MMcf/d lower than the seven-day average leading up to the restriction, Genscape natural gas analyst Joe Bernardi said.

The Energy Information Administration (EIA) has projected that production would grow another 1.1 Bcf/d in July, which could add further downward pressure to regional prices, especially if hot weather does not materialize.

The battle between growing production and persistent storage deficits has played out front and center since the traditional injection season began in April. The EIA showed storage inventories at 2,074 Bcf as of June 22, versus 2,809 Bcf last year and five-year average inventories of 2,575 Bcf. Week/week, the year-on-year storage deficit shrank from 757 Bcf to 735 Bcf, while the year-on-five-year deficit increased slightly from 499 Bcf to 501 Bcf, EIA data show.

Regardless, many market analysts expect prices to soon begin retreating in earnest. EBW Analytics said that despite extremely hot weather for the first week of July, a bullish shift in the 15-day weather forecast and a much smaller-than-expected reported storage injection, “the August natural gas contract was unable to post gains last week, with no net change for the week.

“This trading action suggests that, with temperature extremes expected to fade later this month and natural gas production continuing to surge, the early summer rally may have peaked, setting the stage for significant declines after the July 4 holiday,” EBW said.

That sentiment was echoed by ICAP Technical Analysis, which noted that the five-year average seasonal peak is on June 15. While market bears had been unable to crack support at around the $2.91 level, “it looks more like they ran out of time rather than steam,” ICAP analyst Brian Larose said.

Assuming the bears can take out this area of contention to start the week, ICAP will be taking aim at more critical support at $2.869-$2.867-$2.855-$2.853-$2.848. “As a reminder, bears need to produce a decisive close beneath this dense band of support to derail the case for another round of fresh highs,” Larose said.

Given the volatility that ensued once warmer weather showed up in weather forecasts during June and the pipeline restrictions that remain in place on the SoCalGas system, the California Public Utility Commission (CPUC) decided to allow SoCalGas to increase the Aliso Canyon storage facilities inventory from 24.6 Bcf to 34 Bcf.

After the Aliso Canyon leak was stopped in early 2016, state law granted the CPUC the authority to set working capacity limits for the facility. Before the leak, the working capacity was 86.2 Bcf; it has been set at 24.6 Bcf since last fall. SoCalGas’ current overall storage inventory is 60.1 Bcf. The three non-Aliso storage facilities have a combined working capacity of 49.1 Bcf, which is estimated to be 72% full at 35.5 Bcf, Genscape said.

Meanwhile, AccuWeather shows highs in Los Angeles soaring to the low 100s by the July 7-8 weekend before falling back to more seasonal highs in the mid-80s for the second week of July.

Similar gains were seen across the Midcontinent and Midwest, while points in Appalachia and the Northeast posted more significant increases. In the supply region, Tennessee Zone 4 Marcellus July bidweek prices shot up 66 cents to $2.11, while Tennessee Zone 4 200L rose 21 cents to $2.64. Dominion South was up 12 cents to $2.34.

Permian Basin giant Pioneer Natural Resources Co. has formally adopted targets by 2030 to sharply cut emissions across its Lower 48 operations, and it plans to tie executive incentive compensation to the goals. The strategy, to cut greenhouse gas (GHG) emissions by 25%, with methane emission intensities by 40%, was laid out in the Dallas-based…