July natural gas bidweek prices swooned across a broad front as traders keyed off of a lack of weather developments and elected to follow conventional trading patterns. 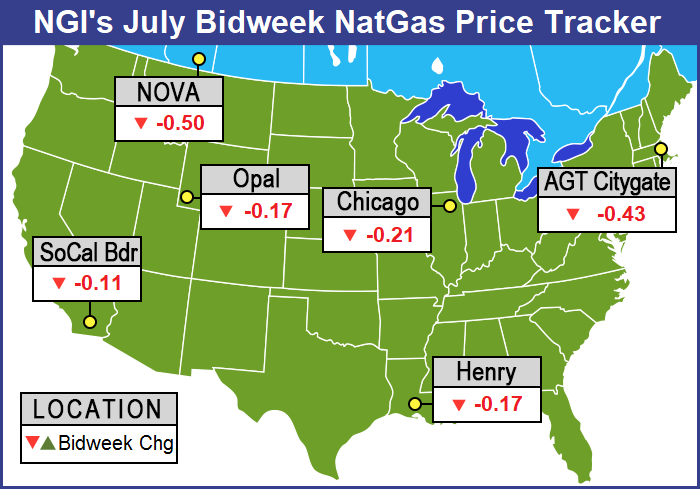 No point followed by NGI made it into positive territory and the NGI National Bidweek Average plunged 26 cents to $2.73, not far above year-ago levels at $2.66. Of the actively traded points the strongest market point was Enable East losing just a penny to $2.88, and at the bottom of the totem pole, Dominion North fell 89 cents to average $1.80.

July futures terminated Wednesday at $3.067, down 16.9 cents from the settlement of the June contract.

Traders reported little in the way of activity outside normal business practices.

“Bidweek activity can be a function of expectations of expected weather, but it can also be dependent on prior demand, which we haven’t had a lot of,” said a Houston pipeline veteran. “It’s been pretty marginal so I don’t think there are a lot of expectations of higher bidweek prices.

“It just looks like a pretty normal business cycle right now. If you think there will be less demand and you will make up any needed volumes on the daily market, you are taking a price risk.”

A Midwest utility which had been seeking to unload excess volumes during June bid week is now in the market for July volumes. “We are buying for summer storage,” said a Midwest supply manager. “We did pretty well and managed to get our deals done before the long holiday weekend.

“Prices came in pretty well, but we will be doing some buying on the daily market for power generation.”

At the end of trading Thursday physical natural gas for Friday delivery managed to outdo a futures market that seemed to have had its fill of bullish weather reports. Gains in the Northeast, Appalachia, and California were able to offset softer quotes in the Midwest, Midcontinent, and Louisiana, and the NGI National Spot Gas Average rose 4 cents to $2.77.

The Energy Information Administration (EIA) reported a storage build of a miserly 46 Bcf for the week ending June 23, about 6 Bcf less than expected, but the futures market nonetheless turned lower. At the close last Thursday August had lost 5.2 cents to $3.042 and September was down 5.0 cents to $3.037. August crude oil added 19 cents to $44.93/bbl.

Prior to the report traders were looking for a somewhat larger storage build. Last year 41 Bcf was injected and the five-year average stood at 72 Bcf.

Citi Futures Perspective calculated a 54 Bcf injection and IAF Advisors estimated a 51 Bcf increase. A Reuters survey of 22 traders and analysts showed an average of 52 Bcf with a range of +40 Bcf to +60 Bcf.

“The market came up a bit, but fell off its highs,” said a New York floor trader. “The market really didn’t do much of anything, but it’s holding above $3, which is a positive, and that’s probably where it is going to hold for now.”

The Denver analytical team at Wells Fargo said the storage data “provides further confirmation that the natural gas markets are at least 2 Bcf/d undersupplied. Over the last nine weeks, this state of undersupply has caused the surplus to fall by 120 Bcf from 307 Bcf at the end of April.

“Based on current weather forecasts, our model indicates a 102 Bcf cumulative injection over the next 2 weeks, which would bring the storage surplus (versus the five-year average) down to just 147 Bcf. As a reminder, our forecast for end-of-injection season storage is 3.88 Tcf, which is in-line with the five-year average and incorporates 3 Bcf/d of lost power generation demand due to gas-to-coal switching driven by higher summer natural gas prices.”

“The 46 Bcf build for last week was smaller than both the 52 Bcf consensus estimate and the 72-Bcf five-year average, a clear bullish surprise,” said Tim Evans of Citi Futures Perspective. “In our view, this keeps the market on track for further gains, with failed technical support at $3.25, and the $3.50 level last tested in mid-May as possible targets in the weeks ahead.”

Inventories now stand at 2,816 Bcf and are 319 Bcf less than last year and 181 Bcf greater than the five-year average.

In the East Region, 23 Bcf was injected, and the Midwest Region saw inventories rise by 20 Bcf. Stocks in the Mountain Region were 2 Bcf higher, and the Pacific Region was down 1 Bcf. The South Central Region increased 2 Bcf.

As bidweek drew to a close Friday physical natural gas for delivery over the extended holiday weekend took a nose dive as traders saw no reason to commit to what amounted to a five-day deal. Double-digit setbacks were widespread and only a single point followed by NGI made it to the positive side of the trading ledger. The NGI National Spot Gas Average plunged 13 cents to $2.64.

Futures traders saw a weak market but admit that forecast warm weather is likely to prop prices up and limit moves to the downside. At the close August had slipped seven-tenths to $3.035 and September was off six-tenths to $3.031.

August futures opened a penny lower Friday morning at $3.03 as weather forecasts moderated and traders reacted cautiously to inventory data that was expected to drive the market higher.

“Natural gas is looking a little soft,” said a New York floor trader. He hedged his bets somewhat and added, “I think we will get a lot more heat now, and you notice they put a little bit less in this week so the bullish [storage] numbers could stay.

Higher prices would be music to the ears of producers expected to increase drilling in the Marcellus/Utica and Permian basins. U.S. oil and gas rig activity remained pretty steady during the last week of June as those in search of oil declined by two to 756, while those drilling for natural gas added one to 184, according to data from Baker Hughes Inc.

Combined, the 940 U.S. oil and gas rigs in service marks a 118% increase over the 431 rigs that were in operation one year ago.

Economics are still favoring plays with strong oil returns, especially the Permian Basin and its various sub-basins. For the week ending June 30, the Permian Basin only added one rig to reach 370 in the play. While the increase was small, the 370 rigs in operation represent a 140% increase over last year’s level of 154 rigs.

Ritterbusch and Associates senses that the market is sending off some bearish vibes given its inability to advance off of last week’s seemingly bullish Energy Information Administration storage report that offered a smaller than expected 46 Bcf injection. In a morning report to clients it said while contraction in the surplus is likely to slow appreciably next week, the short term temperature views continue to favor additional contraction in the supply excess against 5 year averages of around 40 Bcf next month.

“This dynamic should prove sufficient to keep values supported above last week’s lows of about $2.87 per nearby futures. However, our expected advance up into the 3.22-3.25 zone is being pushed back a couple of weeks as some moderation is beginning to show up in some of the weather views toward mid-month. All factors considered, we are still sidelined in this market in anticipation of some wide price swings in both directions with prices apt to post negligible change a couple of weeks down the road.

“For now, we will await price pullbacks into the $2.87-$2.92 zone to approach the long side for an investment type trade given what is shaping up to be a much smaller storage cushion with 2-3 months remaining in the” cooling degree day (CDD) “season. We are, however, keeping a hold on long Sept ’17-short March ’18 bull spreads.”