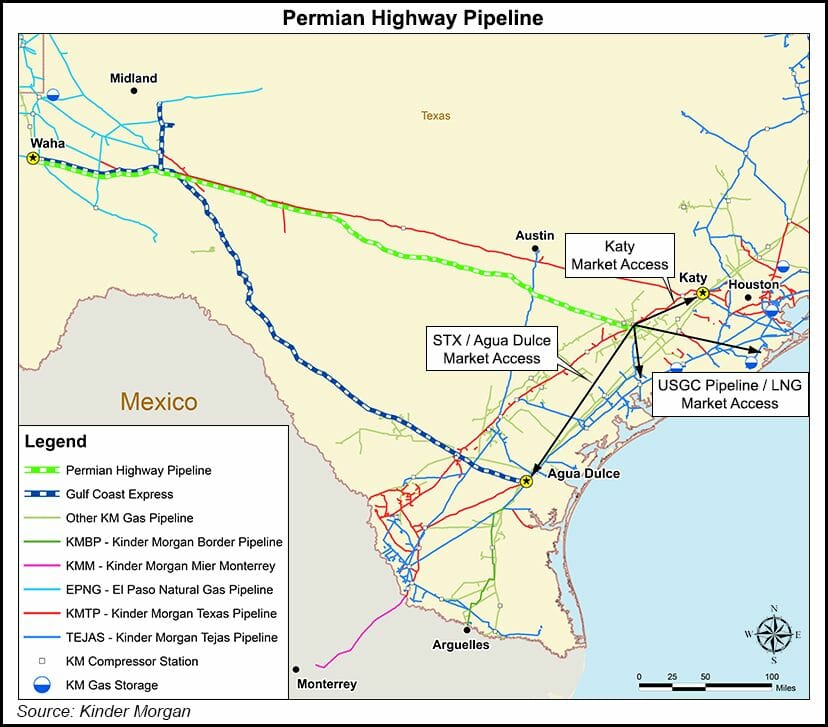 Judge Robert Pitman of the Western District of Texas in Austin rejected a request to impose a temporary restraining order (TRO) on construction of the 430-mile system, which is underway through the iconic Hill Country.

The request for a TRO is part of a lawsuit filed earlier this month by the cities of Austin and San Marcos, Hays and Travis counties, the Barton Springs Edwards Aquifer Conservation District and some landowners against the U.S. Department of Interior, its U.S. Fish and Wildlife Service (USFWS) and Kinder affiliates.

The plaintiffs have sought TROs as part of the route extends through habitat of the endangered golden-cheeked warbler and through parts of the Edwards Aquifer. Kinder separately is facing a lawsuit filed by landowners related to the U.S. Endangered Species Act (ESA).

In his eight-page order, Pitman wrote that granting a TRO is considered “an extraordinary and drastic remedy,” which “clearly carries the burden of persuasion…” The plaintiffs “have not satisfied one of the four required prongs” to impose a TRO: irreparable harm. “Having made that determination, the court does not reach the other three prongs of the TRO analysis.”

Pitman said he appreciated plaintiffs’ arguments and is concerned about the fate of the warblers whose habitat is in the path of the pipeline, but “the court cannot grant a TRO at this juncture when plaintiffs have not met their burden of a showing of irreparable harm to the species as a whole.”

A previously issued biological opinion (BO) by the USFWS found construction was “not likely to jeopardize the continued existence” of the warbler, Pitman noted. The USFWS estimated impacts to about 0.04% of the breeding habitat available for the species in three identified regions. It also specified “reasonable and prudent measures” be taken to minimize incidental take of the warbler during construction.

“Importantly, the incidental take statement specifies that Kinder Morgan is prohibited from clearing vegetation within the warbler habitat from March 1 to July 31,” Pitman wrote. Kinder had been ordered to implement the measures outlined in the BO, including protecting 1,363 acres of occupied warbler habitat on the Igua Ranch in Travis County. Kinder’s preservation efforts are expected to “fully offset impacts to the species,” Pitman noted.

In addition, “it appears that adequate remedies exist to address future harm, e.g., the requirement that Kinder Morgan establish additional conservation areas that will create ”large, contiguous areas of high quality habitat,’” Pitman wrote. The USFWS said the warbler was “able to tolerate the loss of poorer quality habitat when offset with larger acreages of permanently protected high quality habitat.”

Kinder and PHP affiliates “look forward to continuing construction on this vital infrastructure project,” spokesperson Melissa Ruiz told NGI on Tuesday. “Throughout its development, we have actively worked with all of our stakeholders to ensure we have the best possible route.

“These outreach efforts have resulted in nearly 200 route changes to accommodate landowners and address what we have learned in land surveys,” Ruiz said. “As a result of these diligent efforts, we have reached agreements on 100% of the right-of-way for this project.”

Kinder and PHP “are in full compliance” with the ESA, she said. “We have actively worked with the appropriate state and federal agencies, including those agencies tasked with protecting endangered species.

“PHP’s environmental assessments, among other things, comprehensively considered those endangered species that could potentially be affected by the project, and our construction plans have been designed to minimize impacts to those species. We remain committed to preserving the environment including endangered species, and we have gone above and beyond established requirements to do so.”