Jordan Cove Energy Project LP Monday was granted conditional authorization to export liquefied domestic natural gas to countries that are not parties to a free trade agreement (FTA) with the United States from the Jordan Cove LNG Terminal in Coos Bay, OR. 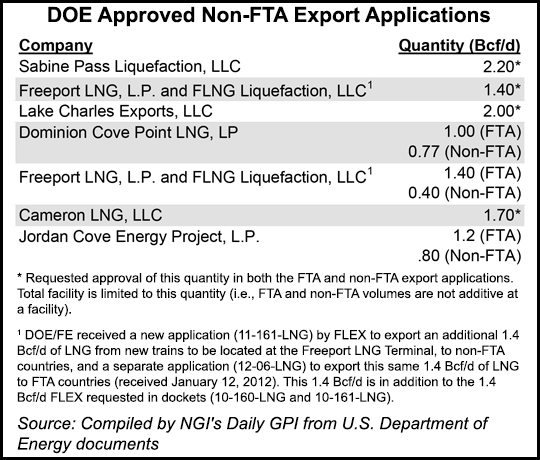 Subject to environmental review and final regulatory approval, the facility is conditionally authorized to export at a rate of up to the equivalent of 0.8 Bcf/d of natural gas for 20 years. The Jordan Cove application was next in the order of precedence after the U.S. Department of Energy (DOE) conditionally authorized the proposed Cameron LNG facility (see Daily GPI, Feb. 11).

In February Canada’s National Energy Board green-lighted export of Canadian gas to the United States for liquefaction and further export to global markets via the planned Jordan Cove terminal (see Daily GPI, Feb. 21).

Jordan Cove officials cited a pending FERC construction permit as the next milestone for their project. They hope to begin operations by 2019. They said the project has gained momentum from approvals to import gas supplies from western Canada and a number of heads of agreements (HOA) they claim exceed the 6 million metric tons per year capacity of the facility.

“Receipt of the DOE approval to export to non-FTA countries completes a key development milestone and brings us one step closer to making a final investment decision,” said Elliot Trepper, president of Jordan Cove Energy Project LP, a unit of Canadian-based Veresen Inc.

“In addition to the nonbinding HOAs announced last October, [we] have further entered into a number of HOAs (see Daily GPI, March 10) with large-scale, prospective customers, including various emerging and traditional LNG buyers located throughout the Asia-Pacific region,” Trepper said. He said binding, long-term agreements with the HOA participants are being sought — both tolling and transportation deals.

DOE said it conducted “an extensive, careful review” of the Jordan Cove application.

A few Bcf/d here and a few Bcf/d there, and what one eventually has is another Qatar, at least on paper. Analysts at ClearView Energy Partners LLC in a Monday note following the approval announcement said the total of approved non-FTA export volumes is 9.27 Bcf/d. That’s nearing the nameplate liquefaction capacity held by LNG heavyweight Qatar: about 10.3 Bcf/d, ClearView said.

Add to the 9.27 Bcf/d of approvals the 0.5 Bcf/d that the Federal Energy Regulatory Commission (FERC) has OK’d for Cheniere Energy Inc.’s Sabine Pass project but that has not yet been signed off on by DOE, and the total approved non-FTA nameplate capacity rises to 9.77 Bcf/d, ClearView said.

This latest approval comes amid geopolitical concerns centered around the conflict between Ukraine and Russia and the desire by the United States and other countries to see Russia’s influence in Europe’s natural gas markets weakened by the alternative LNG provides (see Daily GPI,March 20). DOE is aware of the geopolitical discussion, ClearView said, calling out a passage of the latest DOE order:

“To the extent U.S. exports can diversify global LNG supplies and increase the volumes of LNG available globally, it will improve energy security for many U.S. allies and trading partners,” DOE said in the Jordan Cove order. “As such, authorizing U.S. exports may advance the public interest for reasons that are distinct from and additional to the economic benefits identified in the LNG Export Study.”

Speaking of the export study, the one completed for DOE by NERA Economic Consulting and criticized by anti-export interests, NERA recently completed an update of the study on behalf of Cheniere Energy. It found that exports are even more in the public interest — based on an analysis using more recent Energy Information Administration data — than previously thought (see Daily GPI, March 11).

ClearView analysts said in their note that DOE might be moved by the study revision in ways that Cheniere had not intended when it paid NERA to do the update. NERA’s study used 12 Bcf/d as a theoretical volume of authorized exports. The cumulative volume of DOE authorizations is nearing that amount and would pass it should DOE grant the export authorization Cheniere is seeking for its terminal project in Corpus Christi, TX.

“Although it was transparently intended to make the case for further export authorizations, it may have unintended consequences,” ClearView said of the updated study. “Regulators go to great lengths to avoid the perception of bias. Cheniere’s Corpus Christi project [see Daily GPI, Dec. 6, 2013] straddles the 12 Bcf/d ‘bubble,’ which could make it difficult for DOE to justify an approval without an independent study of some sort.”

Pro-export interests have been paying attention to the findings of the various export studies, too and are happy to remind DOE and the Obama administration of them. “As numerous studies have shown, the export of natural gas can bring reliable, affordable energy to our allies around the globe and to developing nations,” said Frank Macchiarola, executive vice president of the pro-export America’s Natural Gas Alliance. “…[W]we would prefer a process that expedites DOE export approval and welcome the broad support in Congress for such a policy, a policy that will allow companies in the U.S. to seize this opportunity and compete globally.”

Among lawmakers pressing for quicker approval of non-FTA exports is U.S. Sen. Mary Landrieu (D-LA). On Tuesday she is to chair a hearing of the Senate Energy and Natural Resources Committee on “how natural gas exports can create jobs and turn the United States into an energy superpower.” Her praise Monday of the Jordan Cove order suggested that DOE recently stepped up its pace of approvals.

“The Department of Energy’s approval of the Jordan Cove LNG export terminal in southern Oregon is necessary to create more high-paying jobs in America and to solidify the U.S. as an energy superpower. A quick and efficient approval process to responsibly export natural gas from our shores will also reduce the stronghold that countries, like Russia, currently exercise over their neighbors,” Landrieu said. “I appreciate the accelerated pace by which this permit was issued, and I will continue to press for an even more streamlined process in the future.”

Bill Cooper, president of the Center for LNG, seized on the same idea. “Thanks to an abundance of natural gas, the U.S. is in the unique position of being able to supply our allies and trading partners in times of crisis, while maintaining affordable domestic natural gas prices and bringing wealth into the country. With widespread support for LNG exports from lawmakers, economists and energy experts, it’s time for the administration to allow the U.S. realize this opportunity and act quickly on the remaining applications.”

America’s Energy Advantage (AEA), which represents anti-export interests such as some manufacturers and petrochemicals businesses, said this and the previous non-FTA export approvals represent “…a grievous error that puts billions of dollars of investment and millions of jobs at risk. Stable and affordable natural gas is powering an American manufacturing comeback.”

AEA cited billions of dollars that are being spent to develop new and expand existing petrochemical plants in the United States to take advantage of low-cost ethane and other feedstocks and fuels made possible by the shale revolution (see Daily GPI, Dec. 30, 2013).