Natural gas markets were lower across the board as the Christmas Eve storm projected to hit the U.S. is now expected to bring cold air and rain, instead of snow, to key market regions like the Midwest and Northeast. 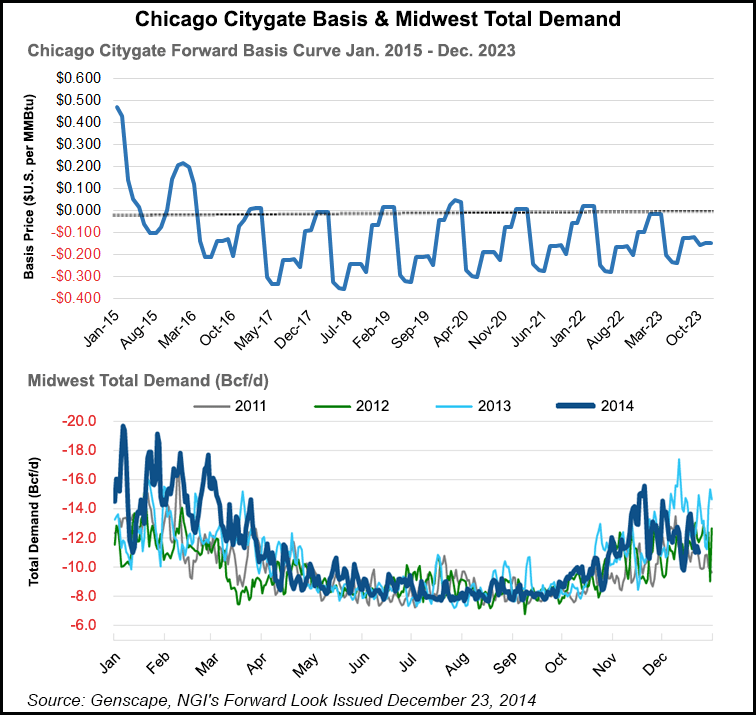 With plenty of uncertainty still looming regarding weather systems forecast for the U.S. during the next couple of weeks, forward basis traders began selling off positions last week, and the trend appears to be continuing this short Christmas holiday week.

The steepest declines occurred in New England, where cash prices plunged by well more than $2 in Monday trading as forecasts show daytime temperatures hovering in the 50s for the rest of this week in Boston.

“The markets were clearly disappointed the Christmas Eve storm isn’t expected to play out colder, and since it’s taking a slightly more westward track, it will bring inches of rain to the eastern U.S., instead of snow,” said forecasters with NatGasWeather.

But while the market may be disappointed with the approaching Christmas Eve storm, forecasters remain confident colder air is coming.

“We have been expecting much colder weather systems and associated cold blasts to follow just after Christmas Day and into the New Year’s for quite some time, which remains on track,” NatGasWeather said. “However, once again, the details of how much colder northern Canadian air is tapped, and where the cold sets up needs refining, especially with how aggressive some of the cold blasts are for the important northeastern and south-central regions. Make no mistake about it, the pattern will be getting much colder,

and there will likely be dangerously cold air flirting with the northern U.S. at times well into the first week of January, it’s just there is plenty of uncertainty in this very unstable and challenging pattern.”

At the Algonquin Gas Transmission citygates, January basis plummeted $2.291/MMBtu between Friday and Monday to plus $9.505/MMBtu and was down nearly $4 from the previous Monday, Dec. 15, according to NGI’s Forward Look. February tumbled $2 to plus $10.015/MMBtu, while the February-March package dropped about $1.42 to plus $7.729/MMBtu.

At Transco zone 6-New York, January tumbled $1.90 to plus $6.257/MMBtu, and the balance of winter lost 80 cents to reach plus $2.817/MMBtu. Like Algonquin, the next two winter strips posted steep, double-digit declines as well, trimming off 24 cents and 15 cents, respectively.

Texas Eastern M3’s January package also fell more than $1, but losses were limited to 30 cents or less further out the curve.

TETCO’s TEAM 2014 expansion and Transco’s Northeast Connector appear to be alleviating some of the price pressure in the Z6 NY and M3 markets, with cash basis coming in well below year-ago levels as the pipeline projects have relieved constraints at various compressor stations in the regions.

For example, TEAM 2014 has allowed more gas to reach NYC and M3 by relieving upstream constraints at Armagh, in Pennsylvania. Armagh utilization has peaked at 96% this winter. In the same period last winter, it hit 100% utilization on three days, aiding M3 spikes, according to Bentek Energy.

Midwest markets moved lower as well, although losses there were not nearly as pronounced as in the Northeast.

The decreases in the Midwest come even as AccuWeather forecasts show daytime temperatures in Chicago tumbling next week to the low 20s, about 10 degrees below normal.

Meanwhile, forward basis prices in western Canada posted the only gains between Friday and Monday. Prices at AECO in Alberta typically move against Nymex futures, which shed some 32 cents during that same time frame.

AECO January basis jumped 19.3 cents to minus 33.5 cents/MMBtu, resulting in a gain of 29 cents since Dec. 15. As we noted in the December 22 Forward Look, some of AECO’s strength can also be attributed to low storage inventories in the region.

Recent mild weather and strong production in the region also improved the storage picture, however.

Further out the curve, AECO’s balance-of-winter strip was down 3 cents to minus 65.8 cents/MMBtu, as was the summer 2015, which landed at minus 70.1 cents/MMBtu.