Of the roughly 1.9 million employment opportunities projected to come from the U.S. oil and natural gas and petrochemical industries between now and 2035, 37.9% will be held by minorities and 15.6% by women, according to a study by the American Petroleum Institute (API). 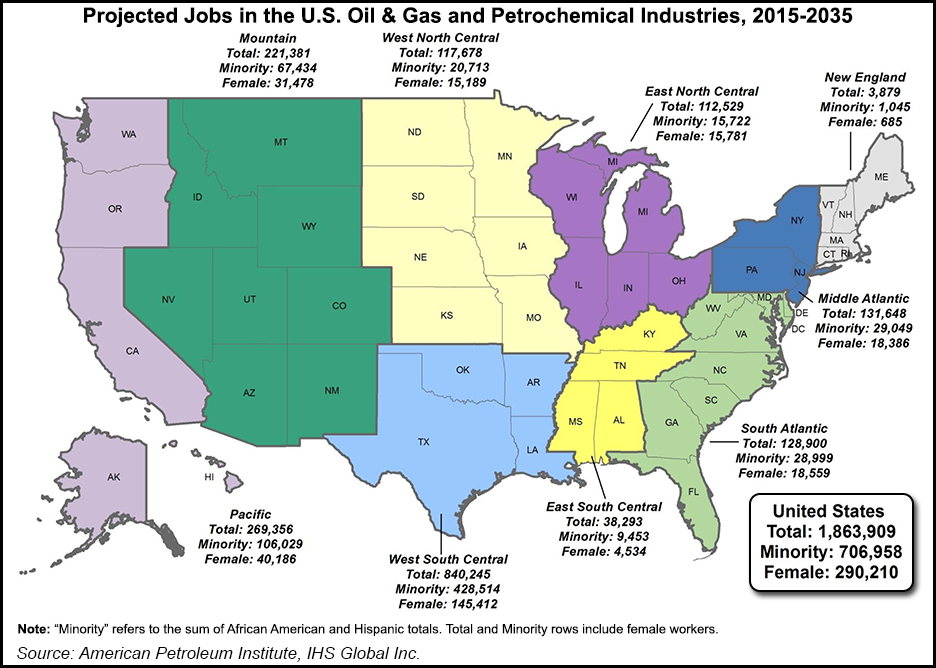 “The oil and natural gas industry pays wages significantly higher than the national average and can provide tremendous career opportunities for women and minorities,” API CEO Jack Gerard said. “These careers can help shrink the income inequality gap without spending a dime of taxpayer money.”

Most of the job opportunities (slightly under 1.4 million) are forecast to be in the upstream sector, but it is expected to employ fewer minorities (35.4%) relative to the midstream (45.5%), downstream (46.3%) and petrochemical (44%) segments.

The petrochemical segment is seen employing the highest percentage of women during the forecast period at 20.3%, followed by downstream (17.5%), upstream (15.7%) and midstream (13.5%).

The study, Minority and Female Employment in the Oil & Natural Gas and Petrochemical Industries 2015-2035, was prepared for API by researchers from the Washington, DC-based IHS Global Inc. The 1.9 million in projected industry jobs does not include indirect employment impacts and assumes an upward lift from a “pro-development policy” as opposed to a “regulatory constraints” scenario.

Women are expected to “share in the growth of more skilled white collar jobs in the industry” in “management and professional occupations, such as petroleum engineers, environmental scientists, accountants and technicians,” according to the report. However, “the already low shares of women in the semi-skilled and unskilled blue-collar occupational groups are projected to decline further, which will hold down the overall increase in female employment in the industry.”

African American and Hispanic workers are expected to account for 25% of the management, business and financial jobs through 2035.

The researchers estimated that 57% of all job opportunities created in the forecast period will be blue collar jobs, creating a “tremendous opportunity for workers with a high school diploma and some post-secondary training.” About one-third of the potential jobs to 2035 are forecast to be in “scientific and managerial occupations,” generally requiring a college degree.

Urging political leaders to “abandon backward energy policies,” Gerard said the industry has the resources to “help millions of workers, ranging from Americans with high school degrees and post-secondary training to those with postgraduate degrees. These new high paying jobs have the potential to be a strong tool in reversing the trends of poverty.”