Every bottle of Jim Beam Kentucky Straight Bourbon could be a little greener in the near future thanks to Beam Suntory Inc.’s inclusion of a renewable natural gas (RNG) project as a part of an expansion at its iconic Kentucky distillery. 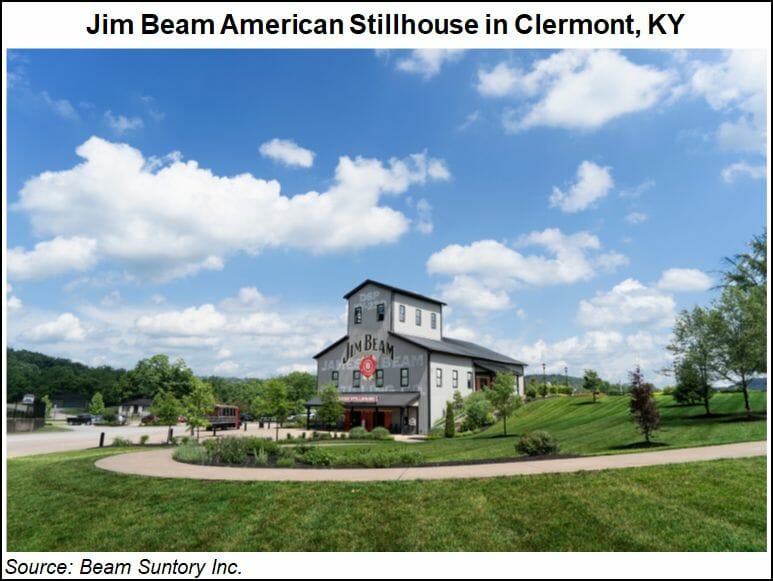 The Chicago-based producer of spirit brands like Jim Beam and Maker’s Mark has announced a $400 million expansion of its Booker Noe distillery in central Kentucky. The expansion could boost the distillery’s production capacity by 50% but is also intended to cut emissions from the facility.

As a part of that project, Beam Suntory is including designs for a facility that would use Booker Noe’s production waste to create an RNG fuel source that would power the distillery.

“This expansion will help ensure we meet future demand for our iconic bourbon in a sustainable way that supports the environment and the local community that has helped build and support Jim Beam,” CEO Albert Baladi said.

By 2024, when the project is expected to be completed, Beam Suntory estimates that the Booker Noe facility will be powered 65% by RNG and have its greenhouse gas emission slashed by half of current levels. The remaining 35% of the distillery’s energy demand is to come from fossil-based natural gas, according to the company.

The company tapped 3 Rivers Energy Partners, a renewable infrastructure firm specializing in RNG projects, to create the facility across the street from the distillery.

Under the expansion plans, 3 Rivers would develop a facility with anaerobic digesters that would capture gas released from the spent grains Beam Suntory normally discards after the distilling process. The facility then would process the captured gas into usable RNG that could power Booker Noe’s high-efficiency gas boilers.

Beam Suntory reported it also intends to distribute the waste material used for RNG production as a fertilizer for local farmers. With the use of additional scrubbing technology, Beam Suntory estimated around 100,000 tons of carbon dioxide could be repurposed annually.

Kentucky’s bourbon industry has attracted other RNG producers to the state, including Synthica Energy LLC. In April, the company announced it was creating a Lebanon, KY, facility to produce RNG with stillage and food waste from the region’s numerous distilleries. Archaea Energy LLC also finished construction on a landfill-based facility last year that produces pipeline-ready RNG in Kentucky.

Over the summer, Kinder Morgan Inc. outlined plans to convert four natural gas-to-power facilities in Michigan and Kentucky to RNG after closing the acquisition of North American Natural Resources.