Japan’s latest efforts to decarbonize could leave the liquefied natural gas (LNG) sector in the lurch as the nation looks to further reduce the share of fossil fuels in its energy mix by 2030. 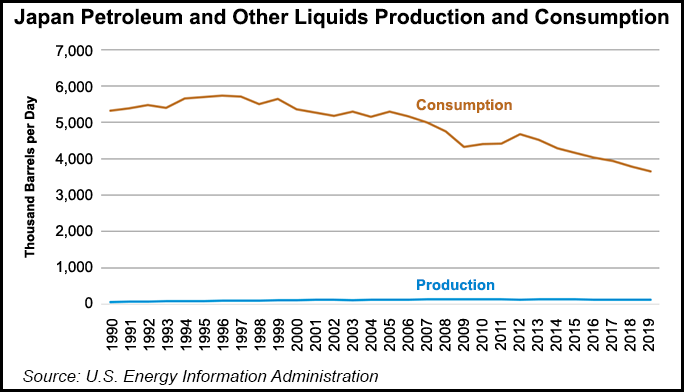 A draft plan unveiled by the government last month would see the nation reduce the share of fossil fuels in its energy mix from 76% in 2019 to 41% in 2030. About half of the new target is expected to be supplied by natural gas, which Japan imports as LNG.

The nation is currently the world’s largest LNG importer, and the plan could pose significant risk to the sector if adopted, experts said.

Rystad Energy Vice President of gas markets Xi Nan also noted that importers might be more hesitant to sign long-term contracts, adding that the situation would likely increase exposure to a volatile spot market. Spot prices in Asia are currently hovering around $17/MMBtu, with Japan-Korea Marker front-month futures  near $16.

“Importers with long positions in the coming years may similarly have to on-sell volumes into other regions, effectively operating as portfolio players,” Nan told NGI’s LNG Insight.

The move would also create additional headaches for importers by essentially turning their facilities into stranded assets, Feer said.

“That’s a lot of expensive infrastructure that ratepayers are paying for right now,” he told NGI’s LNG Insight. “So I think it has a lot of potential consequences.”

Both Rystad and Wood Mackenzie said the proposal could result in about 10 million metric tons/year (mmty) of demand being cut from the market. However, that amount would still be enough to dampen prospects for export projects currently awaiting sanction, Nan said.

In addition, exporters would need to adjust their trade strategies with Japanese buyers if the plan moves forward, she said. U.S. suppliers, which hold about 6.6 mmty of long-term LNG contracts with Japan, are not as exposed as Australia, where exporters have 28 mmty under long-term contracts.

However, Nan also noted that the government unveiled the proposal at a time when LNG projects are already facing delays related to financing, sanctioning and construction, “suggesting a volatile market ahead with potential for downward pressure on demand.”

The plan’s aggressive targets for emissions reduction imply even greater environmental scrutiny across the value chain going forward, she added

“For U.S. projects, upstream flaring and venting will likely be in focus,” she said. “However, built-in flexibility and diversity of supply should keep U.S. producers in the game.”

The proposed plan also targets a big jump in renewable energy. The draft calls for renewables to make up 36-38% of the nation’s energy mix by 2030, double the fiscal March 2020 level and higher than a previous target of 22-24%.

Japan’s draft plan comes as a number of countries are floating roadmaps to lower their carbon footprints ahead of the United Nations Climate Change Conference, aka COP 26, later this year. It also gives Japan a roadmap for achieving its goal of net-zero emissions announced last year.

“I think a lot of countries are sort of trying to assert some sort of leadership by getting ahead of these kinds of issues,” Feer said. For Japan, the draft plan would aim to help the country transition to a more efficient, less polluting economy as it anticipates lower population levels, and thus lower consumption, in the coming decades.

The shift could influence other nations in Asia to also adopt low-carbon plans, Nan said. However, emerging nations that prioritize energy security over lowering their emissions profiles could also potentially take on the volumes cut by Japan.

She also anticipates the increase in intermittent renewables could impact the LNG spot market, as more spot deals are expected when power demand spikes.

The new plan sets a target of 20-22% for nuclear’s share in the power mix, unchanged from previous goals. It also makes room for hydrogen and ammonia amounting to just 1% of the nation’s energy mix. Nan said that suggests the fuels may gain prominence only after 2030.

The draft plan still has a way to go before it is finalized. Rystad expects a final version to be handed down in the fourth quarter.

While Feer is hopeful the final plan may not be as tough on hydrocarbons as the draft, Nan anticipates only “minor” amendments.

“There may be minor changes to the mix, but the clear direction – towards lower emissions – would be difficult to amend,” Nan said.

But if adopted as-is, meeting the goals of the plan would pose a huge challenge.

Wood Mackenzie principal analyst Lucy Cullen said the consultancy’s current forecast predicts a 30% share of renewables, “so the proposed 36% renewables share is a stretch.” The target laid out in the proposal “can only be possible with additional government support,” she added.

Nan said Rystad’s forecast was “generally in line” with the new renewables trend. However, she also said the new 20% target for natural gas “sounds ambitious.” Achieving that target will depend on the nation’s ability to realize its planned deliveries of nuclear power, she said.

“We think a gas share of above 25% in Japan’s energy mix is more realistic.”

Japan also faces an uphill battle in advancing nuclear power, which is unpopular in the wake of the 2011 Fukushima disaster.

“I think one of the hardest parts is the nuclear part,” Feer said. The sector faces an additional issue of running on aging infrastructure as Japan looks to reopen old plants instead of building new ones. “They’re already extending the life of them, but if it’s going to take you another five to eight years to reopen the plants, they’re just getting that much older.”

“Over-optimism on nuclear targets has potential to undermine the government’s plans to cut fossil fuels share,” Cullen said. “With greater emphasis on emission reduction reflected in the revised targets, how the government balances between generation costs and emission concerns will determine relative shares of coal and LNG and the role each plays in offsetting a likely missed nuclear target.”

The Department of the Interior (DOI) will release a proposed five-year offshore oil and gas leasing program by the current program’s expiration date of June 30, Secretary of the Interior Deb Haaland said Thursday. Haaland confirmed DOI’s intentions during testimony before the Senate Committee on Energy and Natural Resources. She said the Trump administration had…