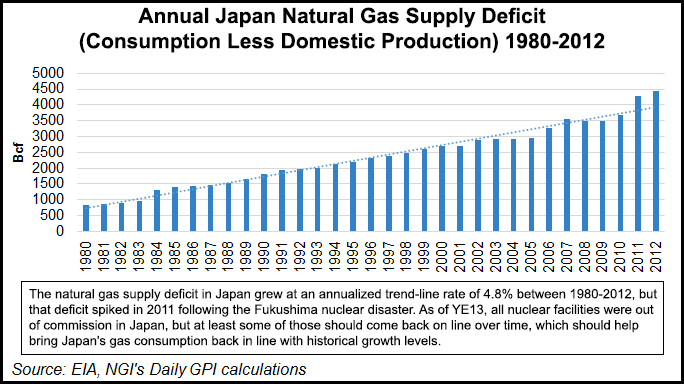 The investment will provide equity required for the development of Freeport’s first train at the terminal. Investment capital will be drawn down over the first train’s 45-month construction period. The balance of capital for first train is expected to be sourced from a consortium of lenders made up of a Japanese government financial agency and commercial banks. The transaction with Osaka and Chubu is expected to close in the second half of 2014 upon receipt of regulatory approvals.

First train customers Osaka Gas and Chubu Electric are two of the largest Japanese utilities and together account for almost 25% of all Japanese LNG purchases, said Freeport LNG CEO Michael S. Smith. “Combined with the previously announced equity investment by IFM Investors in our second train facility [see Daily GPI, Dec. 16, 2013], the funding to be provided by Osaka Gas and Chubu Electric satisfies all of the equity capital needs for construction of the initial two trains of the liquefaction project.”

Last December Freeport LNG awarded two contracts, each valued at $2.5 billion, to a joint venture of CB&I Inc. and Zachry Industrial Inc. to construct the first two trains. Commencement of construction requires authorization from the FERC and a final investment decision by Freeport LNG.

Freeport LNG said it expects Federal Energy Regulatory Commission authorization for the project’s initial three trains around the middle of this year, with construction beginning on the first two trains during the second half of the year. Construction of the third train is expected to begin during the first half of 2015. The first train is expected to begin operation 45 months from construction start, with the second and third trains in operation at six month intervals thereafter.

The natural gas supply deficit in Japan grew at an annualized trend-line rate of 4.8% between 1980-2012, but that deficit spiked in 2011 following the Fukushima nuclear disaster. As of year-end 2013, all nuclear facilities were out of commission in Japan, but at least some of those should come back on line over time, which should help bring Japan’s gas consumption back in line with historical growth levels.