Natural gas bidweek buyers looking out across the weather/storage landscape lost no time in locking in supplies as a previous storage surplus slid into deficit to both last year and the five-year average and forecasters were calling for successive incursions of cold, Canadian air. The NGI National Bidweek Average rose a hefty $1.11 to $4.31, and all points followed by NGI were solidly in the black, some by multiple dollars. 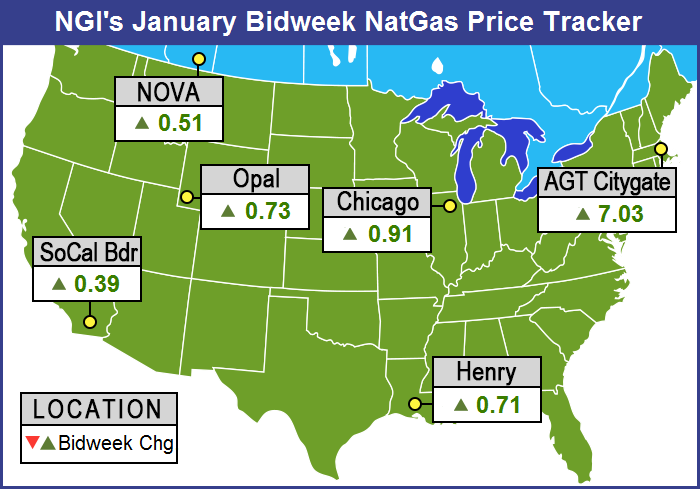 The January futures contract settled Wednesday at $3.930, up 69.8 cents from the December futures settlement.

Marketers having to price their gas relative to the settlement of the January futures were not happy. “It was not good,” said a Michigan marketer buying gas for their end-user clientele.

“Given the number of contracts [January] that were traded, it was relatively low. You can just imagine a lot of it was paper trading, and we are not pleased about that. There were probably not a lot of physical traders, and in February there were like 115,000 trades and there were 15,000 in January. I mean, hello, this is just going to hurt people. It just doesn’t add up that it is necessary for it to have gone up so much.”

Others were more concerned about storage volumes. “We didn’t need too much [bidweek gas], and we need to make sure we get all our gas out of storage,” said a buyer for a Midwest utility.

“Even though we had a cold spell in December, our storage levels were high enough that we wanted to pull that down. The one issue we did have was that the index trading went very quickly and we didn’t get everything bought at index we wanted to and had to buy some fixed price.” He added that they buy their gas indexed to Northern Natural Gas and periodically run into liquidity issues.

As bidweek trading wound down Thursday, what should have been a bullish EIA storage report had just the opposite effect on the futures screen. EIA reported a withdrawal of 237 Bcf for the week ending Dec. 23, the highest yet this season and light years ahead of historical averages. Futures put in a half-hearted rally once the figures were released, but at the close February had fallen 9.6 cents to $3.802 and March was down 7.1 cents to $3.754.

Even though the EIA storage report dwarfed last year’s 51 Bcf withdrawal and a five-year average of 80 Bcf, it didn’t seem to matter.

Traders were expecting a pull about 15 Bcf less than the reported 237 Bcf, and February futures reached a high of $3.884 immediately after the figures were released, but by 10:45 a.m. February was trading at $3.828, down 7.0 cents from Wednesday’s settlement.

“We were looking for between a 220 to 225 Bcf draw,” said a New York floor trader. “Apparently traders thought it would be a lower number because it rallied after the number came out but came back to where it was before the number came out. $4 is going to be a big, big resistance number. If you look straight across the board, you don’t see any $4 prints.”

In Friday’s trading, natural gas bulls were somewhat circumspect about the way 2017 is kicking off, as physical natural gas for Sunday January 1 through Tuesday January 3 delivery eased a few pennies. Gains in California and the Rockies were unable to offset broader setbacks in Producing Zones and Midwest Market Zones, as well as the Northeast and Mid-Atlantic.

The NGI National Spot Gas Average dropped 3 cents to $3.64. Futures prices eased as some speculated that upcoming cold had been more than fully priced into the market and that a “show-me” approach might be advisable regarding forecast cold. February futures retreated 7.8 cents to $3.724 and March gave up 7.0 cents to $3.684. February crude oil shed a nickel to $53.72/bbl.

On the West Coast the storage-challenged SoCal Citygate jumped to reach parity with PG&E Citygate as temperatures were anticipated to be well below normal in the Los Angeles Basin over the holiday weekend. AccuWeather.com forecast that the Friday high in Los Angeles of 62 degrees would drop to 59 Saturday before slipping to 57 by Tuesday, 11 degrees below normal.

Analysts see a market overdone to the upside vis-a-vis current weather forecasts but at the same time acknowledge potential structural market changes. “This market is pulling back this morning as it appears that the dramatic price spike since early last week has been overcooked within the context of cold weather forecasts that are beginning to see some moderation beyond next week,” said Jim Ritterbusch of Ritterbusch and Associates in a Friday morning note to clients.

“While Arctic air will be moving across virtually the entirety of the U.S. next week in driving another huge storage withdrawal, this factor has also been priced in with the market beginning to shift focus to some expected moderation within the eight-14 day time frame. However, we are viewing yesterday’s storage withdrawal that exceeded our expectation by a whopping 36 Bcf as a bullish consideration that will be limiting downside price possibilities.

“[T]he dynamic of a decisive shift from a long-standing supply surplus against average levels that persisted for more than 1.5 years to a sizable deficit is a major supportive development that has yet to be fully priced. The approximate 80 Bcf supply deficit per yesterday’s EIA report is apt to expand appreciably next month into the 200-300 Bcf zone in increasing this market’s sensitivity to occasional and inevitable cold spells such as the one that will be developing next week.”

Gas buyers for power generation across the MISO footprint over the weekend were expected to have to deal with seasonally warm conditions followed by snow with little in the way of wind generation.

“High pressure will support mostly fair conditions and highly anomalous warmth through the weekend,” said WSI Corp. in its Friday morning report to clients. “Daytime highs are expected to rise into the 20s, 30s, and 40s. A deep upper-level disturbance is forecast to dig across the area early next week, [and] this should drive snows across the North early next week, and severe thunderstorms across the South this weekend. Total precipitation over the South will be near 1-2 inches (rain), with 1-2 inches of snow across the North.