Mexico’s natural gas production averaged 4.05 Bcf/d in April, up from 3.74 Bcf/d in April 2021, according to new data from the country’s upstream regulator. 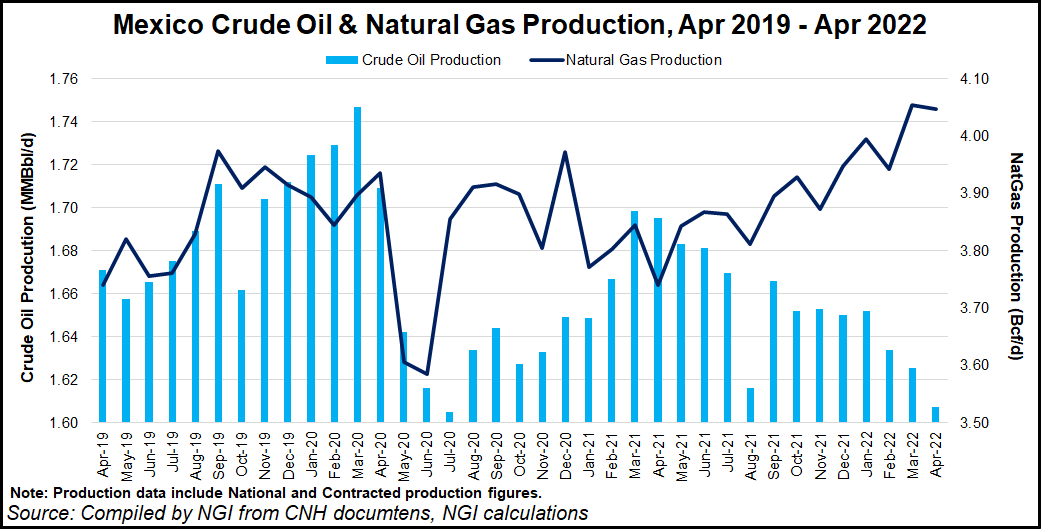 Private sector production, meanwhile, averaged 220 MMcf/d, up from 205.9 MMcf/d in April 2021, according to the latest figures from the Comisión Nacional de Hidrocarburos (CNH).

Production from Ixachi rose by about 46% year/year, CNH data show. Reuters reported this week that CNH is preparing to fine Pemex for excessive natural gas flaring at the onshore gas and condensate field in Veracruz state.

Although President Andrés Manuel López Obrador has frozen bid rounds and other processes to award upstream contracts to non-state firms, more than 100 contracts awarded under the previous government remain in effect.

Murphy Oil Corp. CEO Roger Jenkins said this month that the firm has been granted an additional exploration period by CNH for Block 5 offshore Mexico. Murphy plans to drill the Tulum exploration well there later this year.

Jenkins expressed optimism about the exploration campaign, citing successful drilling results by other operators nearby. Shell plc is planning another well just to the north, he said.

Management of Talos Energy Inc., leader of the consortium that made the Zama shallow water discovery in 2017, said this week it has invested about $111 million at the field since its inception.

“Zama’s expected value is multiples of invested capital to date and Talos has broad strategic optionality to ultimately realize that value,” the company said in its investor day presentation.

Energy ministry Sener earlier this year stripped Talos of its operatorship of the discovery and transferred it to Pemex. Talos retained a 17.35% working interest in the deposit, which contains more than 600 million boe of gross resources.

Talos said it anticipates submission of a unit development plan to CNH for approval, “a critical step” before the parties can make a final investment decision in 2023.

Oilfield services firms have cited a resurgence of upstream activity in Mexico and throughout Latin America, and not just offshore.

Nabors Industries Ltd. CEO William Restrepo said during the firm’s first-quarter earnings call that “in Mexico, we are seeing some rebirth on land activity” requiring top-end or high-spec drilling rigs.