President Obama didn’t say “natural gas” once during his January State of the Union speech, but ISO New England (ISONE) President Gordon Van Welie couldn’t stop talking about the fuel during a Tuesday briefing with reporters. 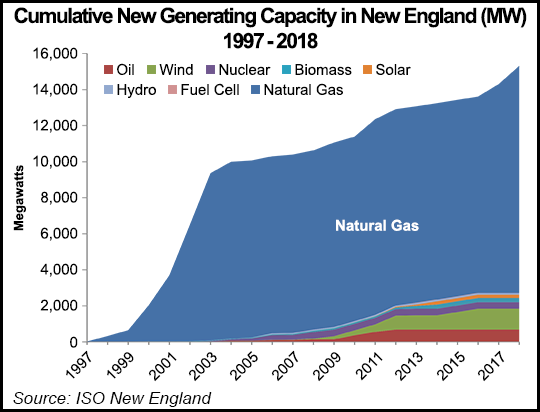 Welie said the magic words about 68 times, and had a lot to say about renewables, too, according to printed remarks from his most recent annual power grid update. Obama didn’t mention gas at all in his recent address (see Daily GPI, Jan. 13).

New England’s grid continues to transition away from coal- and oil-fired generation to natural gas and renewable supplies. It’s a big deal when it comes to coordinating management of the power grid, and it’s a big deal for natural gas infrastructure, Welie said.

“The region will continue to be in this [precarious] position until New England’s natural gas infrastructure is expanded to meet the demand for gas,” he said.

New England’s shift to natural gas has been going on for two decades, and gas only becomes more critical as legacy generating assets are retired. “Last year, natural gas-fired power plants produced just under half, or 49%, of the electricity generated in New England. That’s up from 15% in 2000 and is more than any other fuel source in the region,” Welie said. “Meanwhile, the combined use of coal and oil has fallen dramatically over the same period, from 40% to 6%. Coal- and oil-fired resources rarely operate any more.”

While new pipeline infrastructure is necessary to serve New England demand during the winter months, natural gas has been driving down energy costs in the region already, at least during the summer when there’s plenty of pipeline capacity available, Welie said.

“…[L]ast summer, New England’s average price of wholesale power was even lower than the price in the Midcontinent ISO, which serves the Midwest,” Welie said. “The Midwest typically has used cheaper, indigenous fuels such as coal, and therefore, typically has had lower prices than New England. However, in winter, the Midwest does not have the natural gas pipeline constraints that we experience here and their winter prices were almost $50 a megawatt-hour lower than ours. Because of pipeline constraints, New England consumers cannot reap the year-round benefit of low-cost natural gas.”