Hurricane Irma made landfall in Florida early Sunday morning as a Category 4 storm, strafing the state and knocking out power to millions. Authorities said it could takes weeks before power is restored to every customer. 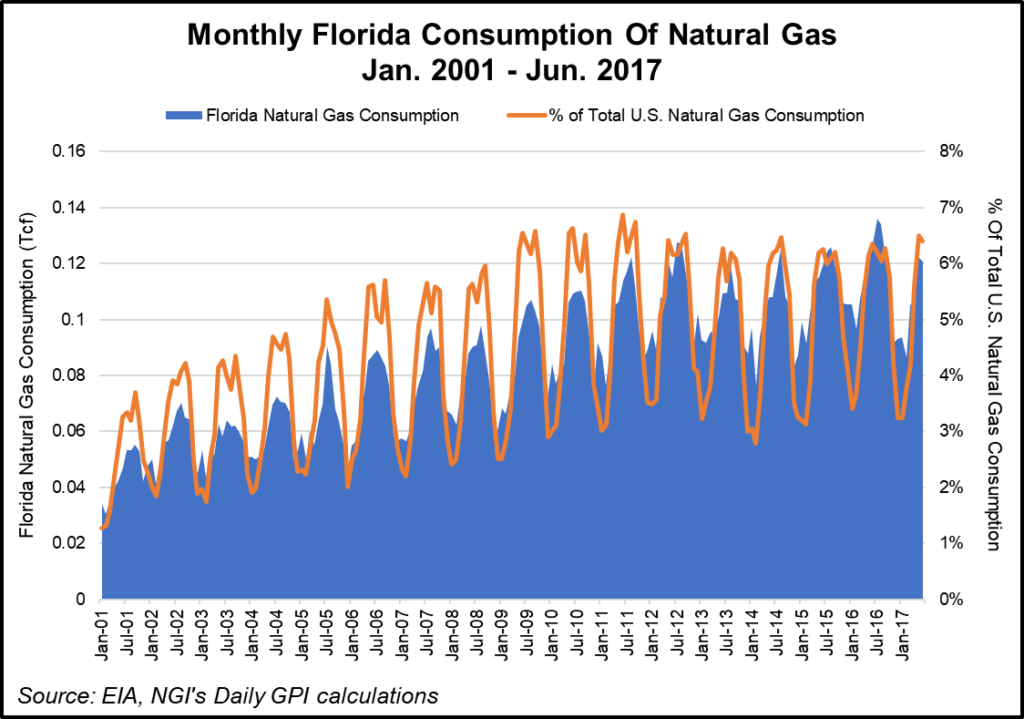 Florida’s power grid was punished during the storm, with natural gas demand taking a big hit as close to six million utility customers across the state lost power at some point.

According to Genscape Inc., total gas demand in Florida, Georgia, Alabama and the Carolinas fell 3.26 Bcf/d between last Thursday and Sunday, from 9.47 Bcf/d to 6.21 Bcf/d. However, aggregate demand was up 118 MMcf/d for Monday, driven by a 205 MMcf/d gain in Georgia day/day.

“Despite many Florida residents evacuating north to Georgia and Alabama, demand in those states fell 1.05 Bcf/d and 325 MMcf/d respectively” between Thursday and Sunday, Genscape analysts said Monday. Between Aug. 10 and last Thursday when the decline began, aggregate demand averaged 9.99 Bcf/d.

Florida, which has minimal oil and natural gas processing, could see demand for fuel sapped for weeks, according to Goldman Sachs. The hit from Hurricane Harvey, which trampled Gulf Coast processing and refineries, is expected to be much longer.

“We believe that Irma will have a negative impact on oil demand, but not on oil production or processing,” said the analyst team lead by Damien Courvalin. “Harvey’s negative impact on demand will remain larger, however, given the large concentration of energy-intensive petrochemical activity in its path.

“Given the only modest impact Harvey had on oil production, the combined demand loss generated by these two hurricanes will be a bearish shock for global oil balances in September of 600,000 b/d.”

In the next several months, “we believe that the post-storm recovery will likely bring oil demand to a higher level, helping to gradually offset this negative initial impact,” Courvalin said. “The lack of an outlet for U.S. crude production should post-Harvey refinery outages remain elevated could in addition over time create risk of onshore production disruptions.”

Irma is a more powerful hurricane than harvey, with potentially more destruction, but its negative impact on demand likely will be smaller because Texas has twice the oil consumption per capita of Florida, according to Goldman.

“Harvey, as a result, had a significant negative impact on refineries and ethylene crackers utilization and their crude and natural gas liquids feedstock (as well as power) demand.”

Goldman analysts tentatively estimated that Harvey’s impact on demand will be 600,000 b/d in the month following landfall.

“In the case of Irma, we expect this initial impact to be around 300,000 b/d,” but the lack of many precedents makes the estimate more tentative. The impact should decline impact to decline to around 100,000 b/d the following month as long-term demand impairments are offset by rebuilding activity.

Even as Irma continued to batter the state, Florida Power & Light Co. (FPL) on Sunday afternoon already had restored power to hundreds of thousands of customers. However, the company expects “additional, lengthy outages” that for some could last weeks.

As of 6 a.m. EDT Monday, more than 3.6 million FPL customers were without power. An estimated 4.2 million overall were impacted, with service restored to about 570,000 customers.

FPL is the third-largest electric utility in the United States, serving nearly five million customer accounts, or an estimated 10 million people across nearly half of the state.

“Despite Irma’s exceedingly high winds, tornadic activity, storm surge and severe flooding, FPL has restored power to hundreds of thousands of customers, due largely to automation along its energy grid,” said FPL CEO Eric Silagy. “We expect the west coast to be the hardest-hit area, requiring an extensive rebuild of our energy grid. As a result, our west coast customers will likely be without power for a much longer period of time. We urge everyone to continue to stay safe and ask for your patience…

“We assembled the largest pre-storm restoration workforce in our nation’s history, but this will likely be a recovery effort of historic proportions, extending for weeks.”

“Right now we’re waiting to send damage assessors out in the field to look at what types of damage occurred on our system and what types of crews, equipment and materials are needed, so we can start to deploy crews and make power outage restoration,” Miles said. “It’s still pretty early, but we really appreciate our customers’ patience as we work through these challenging conditions, and we do have a full team of resources that are dedicated to getting everybody restored.”

Tampa Electric, a unit of TECO Energy Inc., reported on its website late Monday morning that more than 328,000 customers, or 54.7%, were without power after Irma went through the area.

“Thank you for your patience while our crews are working around the clock to restore service as safely and quickly as possible,” the company said. “After assessing the damage, we will give emphasis to address public safety, law enforcement, and essential services but be assured you will not be forgotten.

“While we will work for rapid restoration, please be prepared for extended outages. We will update the estimated time to restore after a full assessment.” 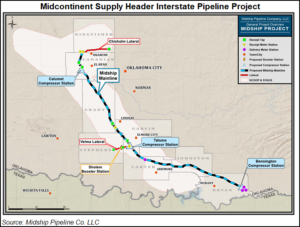 Bankrupt Gulfport Energy Corp. has accused Cheniere Energy Inc.’s Midship Pipeline subsidiary of illegally seizing $75.6 million to hold it “hostage” during contract renegotiations in anticipation of the Chapter 11 filing, according to court filings. “To obtain leverage in ongoing contract negotiations and secure an advantageous cash position prior to Gulfport’s bankruptcy, Midship made false…