Iowa regulators on Monday on a 2-1 vote authorized Energy Transfer Partners’ (ETP) to start construction in the fourth and final Midwest state needed for its 1,172-mile pipeline project to ship Bakken crude oil to markets along the East and Gulf coasts. 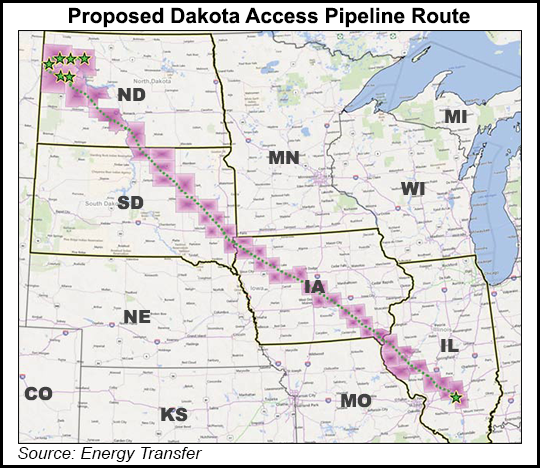 The Iowa Utilities Board (IUB) action, which is effective when signed out on Tuesday, authorizes ETP’s Dakota Access Pipeline LLC to start construction activity that is outside the pre-construction notice (PCN) areas along the route, which crosses the state diagonally from the northwest to southeast corners. PCN areas refer to parts of the route under the U.S. Army Corps of Engineers jurisdiction.

IUB Chair Geri Huser opposed the authorization and said she would file a dissent. Her colleagues, former IUB Chair Libby Jacobs and Nick Wagner, supported authorizing the start of construction.

As reported late last month at the Williston Basin Petroleum Conference in North Dakota by ETP’s head of engineering, construction is underway everywhere else along the route, which avoids almost entirely having to cross over federal lands, so the state jurisdictions involved have loomed large (see Shale Daily, May 27).

“We will start construction on specific areas in Iowa immediately upon an order from the IUB,” an ETP spokesperson told Shale Daily.

Since gaining the state’s heavily conditioned approval in April, the oil pipeline project backers have had some fits and starts, mainly pertaining to a long list of local permits and notifications that Dakota Access representatives have been required to make before it could begin moving a lot of dirt and getting full-blown construction underway.

It appeared in early May that construction had begun in all four states, but subsequently the IUB kept the project on hold, and it remains the state with the most pipeline route right-of-way still needing to be nailed down either through lease agreements or eminent domain.

Nevertheless, the 30-inch diameter oil pipeline remains on track to be completed by the end of this year, providing a “safer, cleaner and cheaper” means of getting increased Bakken supplies to markets throughout the nation, Joey Mahmoud, ETP senior vice president for engineering, told the industry audience at the Williston Basin conference last week in Bismarck, ND. 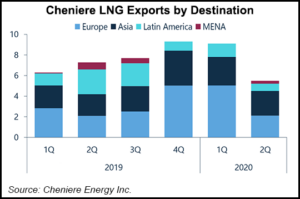 Cheniere Energy Inc. reported a big boost from customers that elected to cancel liquefied natural gas (LNG) cargoes in the second quarter, earning $708 million in fixed fees from those opting out of lifting scheduled volumes.  In the first quarter, the Houston operator earned $53 million in revenue associated with canceled cargoes. The 2Q2020 revenue…