U.S. crude stockpiles ended a summer-long streak of descensions even as domestic demand increased and production was flat, the U.S. Energy Information Administration (EIA) said Wednesday. The agency noted that exports of American crude dropped during the week, while imports climbed. 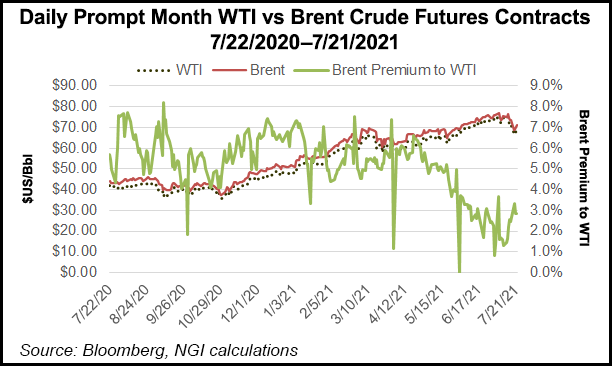 U.S. commercial crude inventories — excluding those in the Strategic Petroleum Reserve — increased by 2.1 million bbl in the July 16 week from the previous week. At 439.7 million bbl, however, U.S. crude oil inventories are about 7% below the five-year average, a reflection of robust export activity for much of the summer and mounting domestic demand.

U.S. production last week, meanwhile, held even with the prior week, averaging 11.4 million b/d. Output has climbed by about 600,000 b/d since May, but it remains well below the early 2020 peak of 13.1 million b/d reached prior to widespread virus outbreaks.

Refinitiv analyst Annette Smith said U.S. producers are unlikely to ramp up output substantially in coming weeks, given that the cartel led by Saudi Arabia recently announced plans to further lift production next month. Oil prices retreated Monday – after that announcement – and a U.S. increase on top of that “would lead to another pull-back” in prices that U.S. producers do not want to see, she said on The Desk’s online energy platform Enelyst.

Earlier this week, the Organization of the Petroleum Exporting Countries and its allied group of leading oil producers headed by Russia, aka OPEC-plus, inked a deal to further boost production through the end of the year and into 2022. The group said it would, by late 2022, pump back into the global market all the crude supply member countries had collectively cut at the onset of the pandemic in 2020.

OPEC-plus is currently adding more than 2 million b/d into the global market, a process started in May and continuing through July. Increases by the group since oil demand started to recover last summer will total about 4 million b/d at the end of July. The cartel slashed output by 9.7 million b/d early last year after the coronavirus curtailed demand.

The deal struck this week includes a plan to raise output by another 400,000 b/d each month from August to December, and likely well into next year until the cartel unwinds all of the cuts made previously.

Brent crude prices had recently approached $80/bbl but fell back to around $70 after the OPEC-plus deal. Brent prices, however, gained ground in intraday trading Wednesday, rising to nearly $72 after the EIA report.

Though OPEC researchers cited concerns about potential interruptions caused by the Delta variant of the coronavirus – a form of the virus causing rapid infections – they also cited “clear signs” of strong demand improvement “as the economic recovery continued in most parts of the world with the help of accelerating vaccination programs.”

“The OPEC-plus deal and rapid spread of the Delta variant have reduced the upside price risk” for crude futures, EBW Analytics Group CEO Andy Weissman said. “The likelihood of the front-month contract rebounding significantly, however, is reasonably high” given demand expectations and still modest U.S. output.