Trade associations representing the oil and natural gas industry expressed support for the Department of Interior (DOI) proposal to reorganize into 12 “unified regions,” indicating the move should lead to faster permitting and more efficient regulatory oversight of federal lands it manages. 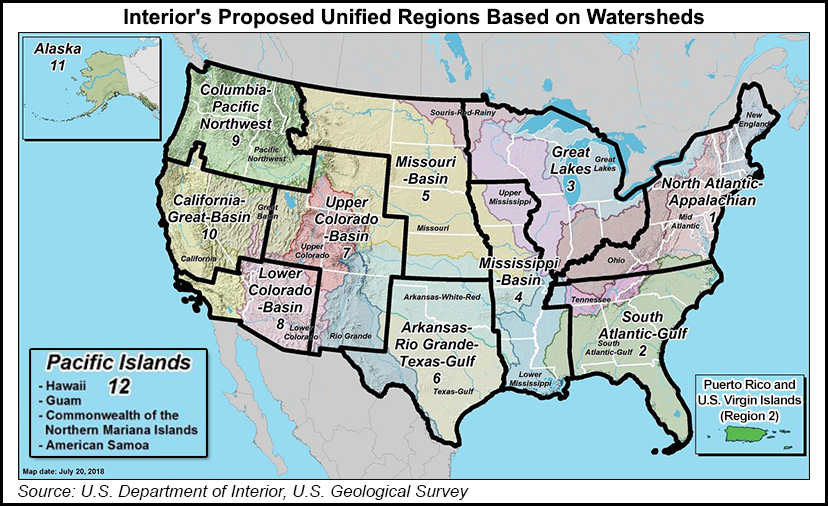 The American Petroleum Institute (API) and the Independent Petroleum Association of America (IPAA) each sent letters to DOI Secretary Ryan Zinke while the proposed reorganization was being formulated. Zinke initially discussed the plans in a five-minute video with employees last January, and in a subsequent interview with the Washington Post. Additional details emerged from a memo sent Wednesday to DOI’s 70,000 employees.

“We appreciate and support efforts to modernize and reorganize the DOI in order to improve governance, streamline permitting and approvals, and improve coordination of government services so that unnecessary barriers to oil and natural gas development are minimized and eliminated,” API CEO Michael Sommers wrote in an Aug. 6 letter to Zinke. “Federal lands hold great promise for continued job growth and government revenue generation, and the DOI’s reorganization should be looked upon as an opportunity to pave the way for expanded, long-term and environmentally responsible resource development.”

In a separate letter to Zinke on July 19, IPAA’s Dan Naatz, senior vice president for government relations, said producers that operate on public lands “face a morass of overlapping regulatory requirements when working on those lands. IPAA strongly supports efforts to improve coordination among bureaus within DOI and with other federal agencies. We also applaud your plans to empower the agency field offices to resolve disputes and be more responsive to the public.”

A major reorganization of DOI would require Congressional approval.

According to a map created by DOI and its U.S. Geological Survey in July, the reorganization proposes establishing 12 regions that would mostly follow state political boundaries — except for one area in Montana, Zinke’s home state. However, the states would be grouped more along watershed lines. There also appears to be three instances where counties in California, Nevada and Oregon are grouped with other states.

The revised map also splits some onshore oil and gas basins/formations but keeps others mostly intact.

Region 1, aka “North Atlantic-Appalachian,” includes New England and the Mid-Atlantic states, plus Kentucky. That means the bulk of the Marcellus and Utica shales would be in Region 1. However, Ohio’s portion of both plays would be in Region 3, aka “Great Lakes,” where the state would be lumped in with those that formerly comprised the Northwest Territory: Illinois, Indiana, Michigan and Minnesota.

Region 2, the “South Atlantic-Gulf,” would include Alabama, the Carolinas, Florida, Georgia, Tennessee, Puerto Rico and the U.S. Virgin Islands. Region 3, the “Mississippi Basin,” would include Arkansas, where the Fayetteville Shale is, as well as Iowa, Louisiana, Mississippi and Missouri.

Most of the Bakken Shale should fit in Region 5, aka “Missouri Basin,” which would include the Dakotas, Kansas and Nebraska. The bulk of Montana, minus the Western Slope Watershed, is also in Region 5.

Region 9, the”Columbia-Pacific Northwest,” would include Idaho and Washington state, Montana’s Western Slope Watershed and most of Oregon. Klamath County, OR, appears to be part of Region 10, aka “California-Great Basin,” which covers the bulk of California and Nevada not included in Region 8.

Rounding out the list, Region 11 is to cover Alaska, while Region 12, aka the “Pacific Islands,” would include Hawaii, Guam, the Commonwealth of the Northern Mariana Islands and American Samoa.