The U.S. Interior Department ceased new oil and gas lease sales on federal lands and offshore through at least June as officials this week extended a review of the program’s impact on climate change. 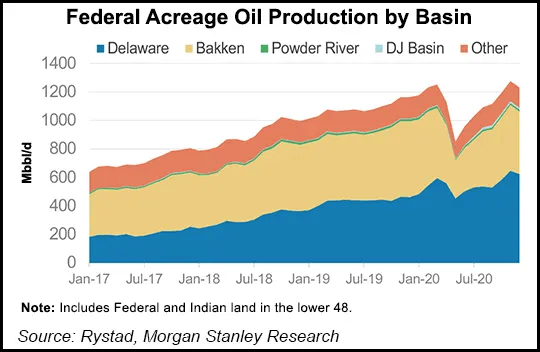 Interior’s Bureau of Land Management (BLM) said it is “exercising its discretion to not hold lease sales” through the second quarter. The action does not affect existing leases.

Federal officials earlier this year suspended or delayed lease sales in the Gulf of Mexico, the Arctic National Wildlife Refuge in Alaska and in individual states such as Wyoming following lawsuits from conservation groups that argued drilling causes environmental problems for both people and wildlife.

Thirteen states banded together in March to file a lawsuit in a Louisiana federal court to force the resumption of the sales. They maintained that federal law requires regular sales. Wyoming officials filed a separate but similar federal lawsuit. Those court challenges are ongoing.

BLM officials said this week they are “committed to managing our programs in a way that restores balance on public lands, creates jobs and provides a path to align the management of America’s public lands with our nation’s climate, conservation and clean energy priorities.”

Shortly after taking office in January, President Biden ordered BLM to review the entire oil and gas leasing program, tasking officials with determining if it benefits energy production at the expense of the environment and U.S. taxpayers.

While billed as a temporary pause, BLM did not specify an end date, leaving oil and gas industry officials concerned that the Biden administration’s ultimate plan could, at a minimum, scale back the federal lease sales program substantially.

The announcement drew scorn from state and industry officials, including the Independent Petroleum Association of America (IPAA).

“Public lands belong to all Americans, not just the anti-energy extreme activists,” said IPAA COO Jeffrey Eshelman. “These lands provide not only American energy, recreation and grazing, but are also one of the nation’s largest revenue resources.”

Wyoming Gov. Mark Gordon called the moratorium “unnecessary.” He warned that an extended pause could damage the state’s economy and the economies of other western states with little benefit to the environment.

“What is most disappointing is that the Department of Interior could have chosen to review the federal oil and gas leasing program while conducting quarterly sales,” Gordon said. “Instead they chose to tighten the financial choke of revenue that would normally flow to the state from lease sales.”

Gordon said Wyoming had in recent years received on average $35 million annually from oil and gas lease sales on federal lands. “This year, we have received zero because the first and second quarter lease sales have been indefinitely postponed,” he said.

In 2020 alone, the federal program brought in an estimated $5 billion in royalties and fees, according to the federal Office of Natural Resources Revenue, with states that are home to drilling receiving a cut of that income.

The BLM’s decision this week to put the brakes on new oil and gas lease sales comes as Biden on Thursday launched a two-day virtual climate summit with 40 leaders from around the globe. The president kicked off the event by formally pledging that the United States would by 2030 cut its emissions at least in half from 2005 levels.

Biden also called on other leading countries to hasten their own plans to minimize greenhouse gas emissions in an effort to ward off what he described as the potential for calamitous fallout from climate change. “The science is undeniable and the cost of inaction keeps mounting,” Biden said in televised remarks.