While regulators and lawmakers wrangle with safety standards for shipping crude oil by rail, interest is growing in shipping liquefied natural gas (LNG) by rail as well. 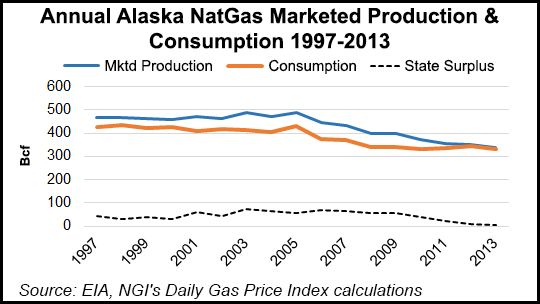 At least three parties have approached the Federal Railroad Administration (FRA) about authorization to ship LNG by rail, according to testimony Wednesday at a House Appropriations subcommittee budget hearing.

“One of the areas we see as our next challenge will be natural gas,” Timothy Butters, acting administrator of the Pipeline and Hazardous Materials Safety Administration, said at the hearing.

Last November the Alaska Railroad Corp. (ARRC) submitted a request to FRA for permission to transport LNG in ISO-certified tankers atop flatcars. LNG cargoes are seen as a way to expand fuel options for some Alaskans.

“In the northern parts of the state (Fairbanks and the Interior villages), residents must rely on extremely expensive fuel oil for heating and power generation, leaving many of them spending more to heat their homes than to own them,” ARRC told FRA in a February letter outlining its plan.

The railroad said it envisions running two trains per week with each consisting of 60-70 portable LNG tanks riding atop 30-70 flatcars.

“The ARRC anticipates that it will operate trains carrying LNG in ISO tankers in the same manner, and under the same precautions, as it operates trains carrying similarly classed hazardous materials (e.g., LPG),” the railroad said. “The trains will be operated in full compliance with 49 C.F.R. Parts 172 and 174 and any other applicable regulations or operating practices. The ARRC will also conform to any other operating restrictions the FRA may impose as a result of this approval process.”

ARRC emphasized that over the last decade it has made significant safety upgrades to its rail infrastructure in Alaska. “The ARRC has also inspected and maintained its track to a level above that required by the FRA,” it said.

Union Pacific Railroad also has approached FRA about shipping LNG by rail, according to reports. Applications to the FRA are not made public during the review process, an agency spokesman told NGI.

According to testimony at Wednesday’s hearing, the federal government already has begun to study how to ensure the safety of rail transportation of LNG.

Shipping LNG by rail would help to reduce the amount of stranded natural gas that is flared for lack of pipeline infrastructure, Butters told the hearing. Some LNG could be carried by rail to coastal terminals for export overseas, he said. Some LNG could fuel train engines and marine vessels, as well as power generation.

“Obviously, there will be an increased need to move this product by rail,” Butters said. “We are looking at making sure the containers are properly designed.”

Butters said the long distance hauling of LNG was not the only problem the agency sees with natural gas. There are problems with greater volumes of gas moving to the LNG centers. Gathering systems in Ohio and in the Marcellus in general are not regulated. “Some of those systems are pretty significant and are moving through some populated areas,” he said in responding to Rep. Tim Ryan, D-OH, who was concerned about an outlet for Ohio production.

There is no regulation, state or federal, over the length of pipe or compression of natural gas gathering systems. The federal government could seek additional authority to monitor the safety of these systems, “and we have been encouraging states to pick up responsibility. “Some states are looking hard at it,” Butters said.